The Billabong Grove 186 Moda is contemporary and stylish, with bold interior highlights and a fairly conventional layout. Billabong’s specialty is customisation, so if the internal red splashes, for example, aren’t your cup of tea, they’ll have something that is.

At $64,000, it’s more than $10K dearer than the Concept Innovation, though it does include some features that were missing in its rival, such as a satellite dish.

Like the Innovation, the Billabong Grove 186 Moda requires a mid-weight 4WD for safe and legal towing. Having said that, it’s a fairly smooth performer on the blacktop. 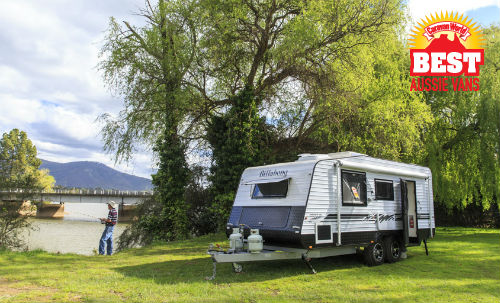 SETTING UP AND HITCHING UP

Setting up the Grove is very straightforward. There are no impediments or difficulties in this department. Likewise when it’s time to hitch up – just lower the coupling onto the ball, connect the trailer plug and safety chains, etc., and you’re good to go.

Overall, this is a good package in terms of specifications and space that would suit a touring couple nicely. It would be most at home on sealed roads, though towed with care it should handle undulations and some dirt tracks.

This van has a conventional layout: front bedroom, rear bathroom, and everything else in between, though with the bed’s bolster extended walk-around space is somewhat limited. Food-prep space in the kitchen is minimal, too. The interior is visually appealing, however, and there’s a good amount of storage on offer.

Internally, the finish is quite acceptable. Everything fits together like it should.

The van does well in this department, with everything from an onboard satellite dish to a washing machine. It is indeed a comfortable caravan that will leave you wanting for very little as you tour the country.

Like its rival, the Concept Innovation, the Billabong Grove doesn’t employ technology with which we’re unfamiliar, or that’s not readily available on the aftermarket. That’s not to say, however, that the Grove lacks X-Factor…

The Billabong is a handsome rig, that’s for sure. Viewed from any angle, it’s hard not to be impressed by the contemporary colour scheme, which is, for the most part, well thought out and executed. But not everybody likes the trendy look. So if bright reds that contrast with charcoal cabinetry and white walls aren’t your thing, Billabong has a range of options that are bound to be more pleasing to your eye.

For its price point, the Billabong Grove 186 Moda has all the bases covered and a couple more. The layout is open, spacious and visually appealing in a trendy kind of way. It’s bound to do you proud on extended tours of Australia.