The Savannah Way is made up of a series of roads and highways that stretch right across the top of Australia for close to 3000km, from Broome on the west coast to Cairns on the east. While there are a few choices for your actual route, depending on how much offroad driving you want to do, the usual path follows the Great Northern Highway and the Victoria Highway from Broome, WA, to Katherine, NT – a distance of 1550km. Next, you will travel 270km from Katherine to Daly Waters on the Stuart Highway; and from there to Borroloola on the Carpentaria Highway.

The roads are sealed to this point. But from Borroloola to Normanton, Qld, the next 630km of the Savannah Way is nearly all unsealed and mostly rough. Once you reach Normanton, it is possible to drive the final 690km to Cairns on the Gulf Developmental Road, Kennedy Highway and Bruce Highway, which are all sealed. 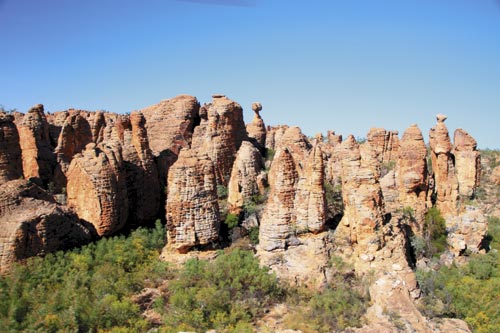 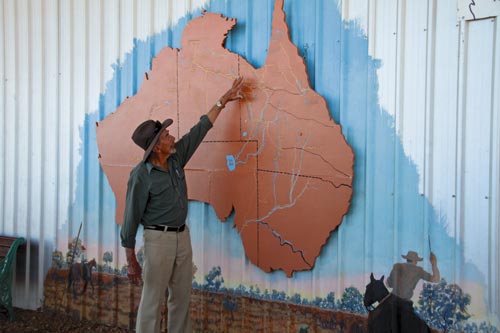 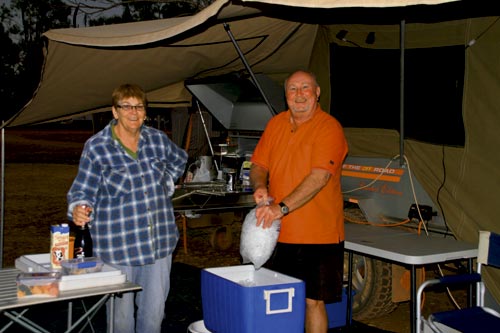 Because we were already in far northern central Queensland and wanted to visit Cape Crawford, we travelled west to Mount Isa and headed north on the Tablelands Highway, joining the Savannah Way at Borroloola before eventually heading back east toward the Queensland Coast.

Our van had been sitting unused for two years while we completed a contract managing a caravan park in north-west Queensland. As the time drew nearer for us to get back to our travels, we began readying our Millard caravan for another trek.

We had travelled most of the western section of the Savannah Way on previous trips, but had not yet tackled the lesser-travelled stretch from Borroloola to Normanton. We knew the driving conditions would be a bit rough, so we fitted new tyres to the van and the LandCruiser. On this trip, we’d have an extra passenger, too: our dog, Murphy, a fairly large boy but definitely part of the family.

We managed to drive 100km the first day and spent two nights at a little farm stay at Nelia, west of Richmond, outback Queensland. It was quite unusual waking up to the sounds of turkeys gobbling and geese honking, but not as unpleasant as someone pressing the night bell at midnight to tell you there was no water or power or that the toilets were blocked! Murphy and the resident goat, Sebastian, eyed each other suspiciously and, despite Murphy’s boisterous attempts to play, they settled into a wary truce.

Nelia was a great start to our holiday as we didn’t really do anything except take a short drive to a couple of river crossings and some walks to waterholes to get photos of birdlife. I think Murphy rather fancied being a farm dog, but I’m not sure his interest in chickens is purely protective.

Feeling a little more refreshed, we set off and drove 50km west along the Flinders Highway to Julia Creek. We consulted the Free Camps book and found a little piece of heaven just on the outskirts of town. As much as we liked our spot beside the waterhole, we decided to put a few kilometres between us and Richmond and so headed for Mt Isa, some 260km away. We made a brief stopover at Cloncurry to grab some lunch and we remained on the lookout for camps.

Mt Isa was the last large town we would see for a while, so a top-up of food and fuel was in order. But before we could leave town, Murphy had to visit the vet as one of his paws was infected thanks to a large burr lodged between his toes. After parting with almost $200 for the consultation and some medication, we finally left for Camooweal, about 180km further west on the Barkly Highway.

CAMPED BY A BILLABONG

Our home for the next couple of nights was right beside a billabong along the Georgina River at Camooweal, the last Queensland town before the Northern Territory border. I lost count of the number of birds that live here and it was incredibly peaceful – except for the occasional generator starting up.

It didn’t take long to make the decision to stay for an extra night at this idyllic spot. All three of us were enjoying walks along the water’s edge and just watching the non-stop parade of birdlife. It was a very popular spot with hardly a space left by late afternoon.

Before leaving, we called into Drovers Camp, a museum paying tribute to the hardy men who spent years of their lives moving cattle through some of the most remote regions of the country, helping to open up areas for settlement. One of the best aspects of the museum tour was that the guides were all former drovers who gave a great personal insight into the day-to-day life of a drover. There is no entry fee, but donations are always welcome. The gallery, which contains portraits of some 150 drovers, is a marvellous tribute to these true characters of the Australian bush.

It took most of the day to drive to the Barkly Homestead, which rests at the intersection of the Barkly and Tablelands highways in the Territory. It was, for us, a fairly long drive. Usually we don’t cover many kilometres in a day and we drove just over 260 to arrive at the well-known homestead at around 4pm. We had a rather unusual welcome to the campgrounds as several huge bulls were roaming through the sites. But, aside from us, no-one seemed to find this a bit strange.

The sites were nice and large and mostly drive-through. Fuel prices were quite high, as was all food and drink. But that’s not surprising once you realise it takes 500L of diesel a day just to run the generators for power.

From Barkly Homestead we took the Tablelands Highway north towards Cape Crawford, about 370km away. The road is sealed, but it’s only one lane most of the way. If you pass a car, even one towing a van, both vehicles have to run half on the bitumen and half on the gravel verge. If you meet up with a road train, which are very common up here, you must give way to the larger vehicle by pulling completely off the road and, at times, this is not an easy feat. At Cape Crawford, we met a few drivers who complained about the big rigs. I could understand their being rattled by the speed of the trucks, but I could also see it would be impossible for the heavily-laden rigs to slow down safely. It would also be downright dangerous for them to pull on to the unstable edge of the road.

The Cape Crawford camping area offers both powered and unpowered sites and both options are fairly informal in layout – you can park anywhere you like, mostly. The only difference, of course, is that in the powered area you have to gather around multiple power outlets and try not to park anyone in. This proved a little tricky for a few campers and a bit irritating for others who didn’t really enjoy the closeness of some of the neighbors’ barking dogs – not ours, I might add. Other than that, it was a lovely, shady area close to the amenities and the hotel, where there was live entertainment every night.

At the junction of the Tablelands and Carpentaria highways, Heartbreak Hotel has new owners, Kerry and Graham, who plan to improve the resort and make it even more appealing to the travelling public.

One of the main attractions at Cape Crawford is scenic flights over the Lost City formations. These usually run daily, costing $160 per person.

The helicopter flights take about 20 minutes and they provide a close-up look at these amazing sandstone pillars. Our pilot gave a good commentary about the region and its history.

From Heartbreak Hotel, the next leg of our journey took us north-east towards the Gulf of Carpentaria.

We were to stay at King Ash Bay Fishing Camp, which is on land leased by the fishing club there. Anglers from across the country flock to this remote camp in search of the wide variety of sportsfish, including barramundi, which inhabit the waters of the McArthur River system.

From Borroloola, the first stretch of the road to King Ash Bay is part of the well-maintained, sealed road to the load-out facility at Bing Bong. Heavy loads of silver, lead and zinc from the McArthur mine are transported along the road to be shipped out on massive barges and then loaded on to bulk carriers to be sent for processing.

The last 21km into King Ash Bay from the turn-off is dirt but not particularly rough, just very dusty. Go for a drive to watch the barges being loaded – it is quite impressive and you can see the whole operation from the top of a raised platform built just for this purpose.

On reaching King Ash Bay, there were a variety of sites to choose from. Both powered and unpowered sites are available near the clubhouse and shops and the very new amenities block. Bush camps along the riverside are highly sought after and some keen anglers spend months at a time up here during the season.

Dogs are allowed at the bay, but make sure to keep them on a leash as this is croc country – there are some monsters that won’t think twice about making a snack out of your canine companion.

Next issue, we’ll leave King Ash Bay and join the Savannah Way at Borroloola before heading east toward Hells Gate, Doomadgee and Burketown.