IT'S A FACT that there aren't too many 4WD motorhomes cruising Australian roads. There are several factors behind this, but the key reason is that a true 4WD motorhome is really something of a specialist machine and, except for some small ute conversions, they're usually quite expensive.
Looking a little closer, it turns out there are lots of motorhomers who just want a bit of extra traction rather than a 'go anywhere' RV, which is why the Mercedes Benz 4x4 Sprinter's arrival in Australia was greeted with considerable interest, especially by van converters such as Horizon Motor Homes in Ballina, NSW.
It didn't take long for the Acacia 4x4 motorhome to appear out of the company's workshop, especially given the layout design had already been successfully used for the standard two-wheel-drive van.
ADDED CONTROL
I should mention here that while the Mercedes Sprinter base vehicle does have definite offroading abilities, it's more for use in conditions that require improved traction, rather than heavily undulating roads. That doesn't necessarily mean, however, such roads can't be negotiated - the Benz is a very capable vehicle.
The Sprinter 4x4 is available as a long wheelbase (LWB) with dual rear wheels, and in either the 2.2L 120kW or 3L 140kW turbodiesel versions, both with the five-speed automatic gearboxes. Our review vehicle came with the larger V6 engine, which is the way to go if plenty of rough-road/offroad travel is planned.
One of the advantages of dual rear wheels is more sideways stability when on the road, which is good for the increased height of the rig. Driving the 4WD Sprinter is little different from the normal two-wheel-drive version, but there were no dramas, especially
with the five-speed auto moving smoothly through the gears. It was a pleasure.
As with many van conversions, the main work done on the Sprinter involved cutting holes in the panels for things like the windows, toilet cassette, gas bin, Seitz roof hatch, fridge vents, etc. In addition, items such as the Fiamma awning, TV antenna, optional external gas connection and alloy bullbar have to be fitted.
An option featured on our Acacia was the replacement of the Mercedes sliding door with an outwards-opening motorhome door, allowing for a window (that can be opened without being whacked by a sliding door) behind the kitchen bench. It's also quieter than the so-called 'whirr-clunkers', which can be a nuisance for your sleeping neighbours.
If the original sliding door is retained, it's a good idea to fit flyscreens to both the side and rear doors so they can be left open during warm weather.
USE OF SPACE
Given this is a van conversion, layout variations are somewhat limited, especially if a double bed is thrown into the mix, as is the case here. But the Acacia 4X4 designers have done a good job and the result is very workable.
Making use of every bit of space, both driver and passenger seats swivel around and, when combined with the table and extra seat behind the driver, make a neat dining and lounge area.
Like a few other swivel-seat designs I've seen, shorter people might like footrests on the floor. The table is attached to a side rail and can be moved backwards and forwards as needed, but can also be lifted out of the way if not needed. Both cab seats have LED reading lights, while the rear seat has an LED strip under the overhead lockers. There are 240V and 12V sockets under the table.
Kitchen design is always a little tight in a motorhome like the Acacia, but having the fixed motorhome door does allow for a bit more usable space. The benchtop is home to a three-burner cooktop and stainless steel sink with drainer, each with frosted glass covers. There is even a bit of extra space for working on the bench. The Smev grill/oven was an option on our review Acacia - something many travellers will likely appreciate.
When it comes to packing away all the kitchen essentials, there is a large two-door cupboard, as well as a smaller cupboard and two drawers. All cabinetry is made from a laminated plywood and the drawers all have ball-bearing runners.
There are no overhead lockers, but that does leave space for swivel-mounting the flatscreen TV, which can be seen from either the bed or the front seats, and the 12V switch panels and water tank gauges.
Opposite the kitchen, another cupboard sits on top of the Waeco 136L fridge and Sharp microwave. A full-height wardrobe between the fridge and rear bed offers some hanging space.

STAY FRESH
While there may not be enough room to swing the proverbial cat, the mid-offside bathroom offers plenty of space and features a cassette toilet, variable-height shower and small corner basin. It also comes with a ceiling vent, wall mirror and towel ring. And just in case the internal mirror is fogged up, the shower door also has a full-height mirror on the outside.
In the rear, the 1.8x1.4m (5ft 11in x 4ft 7in) east-west bed fits very snuggly across the back. Admittedly, this setup is not for especially tall people, but it does mean more room in the rest of the rig. LED reading lights are fitted on both sides, so occupants can sleep with their head at whichever end they choose.
There are overhead lockers all-round and the large under-bed storage can be easily accessed from inside and out. Part of the storage space is taken by the gas/electric water heater and the Dometic vacu-flush cassette.
All 12V electrics are supplied by two 100Ah deep-cycle batteries, which are charged by a 40A three-stage charger. Solar panels are an option, but given the offroad capabilities of the Sprinter and the fact it has a compressor fridge, they are pretty much a definite if planning any lengthy bush stays.
THE BOTTOM LINE
For motorhome lovers also looking for an AWD/4WD experience, the Horizon Acacia is going to be of major interest. Sure, it won't take you absolutely everywhere the way some of the more specialist 4WDs will, but it will offer plenty of exciting rough-road adventures.
Built according to the tried and tested Horizon style, the Acacia 4x4 comes with all the essentials, and more than a few luxuries, for enjoyable travel, wherever you wish to go. 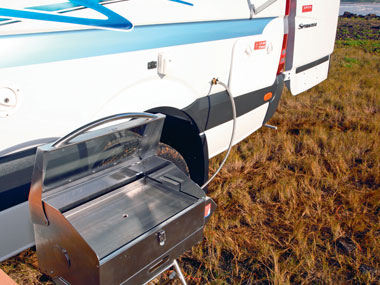 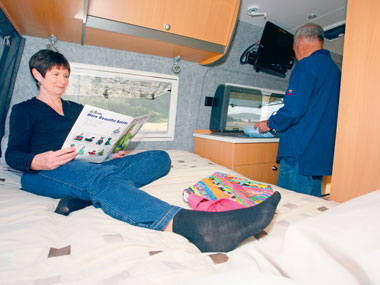