Q&A with On The Move

It’s a stand-alone achievement in the caravan industry and even more noteworthy considering OTM fundamentally commenced as one man’s ‘hobby’ only 10 years ago. 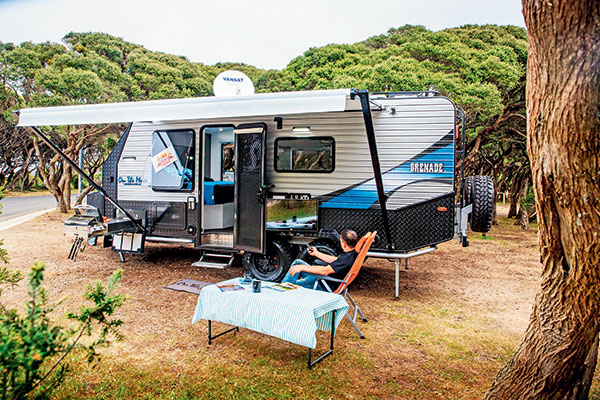 In 2014, the OTM Grenade Series II – laden with the latest gadgetry – took the judges at Best Aussie Vans by storm and it took out what was then the highest-priced category, the $80K-plus group.  Then in 2015, the well-featured and impressively-built Traxx – comprising a high degree of electronics sophistication – snared the $65K-$80K category. And in 2016, the Vortex 10th Anniversary Edition – built specifically for vanners, like Mifsud, who love fishing and boating – took out the $65K-$80K group once more, sealing a trifecta for Mifsud and OTM.

And it appears the husband-and-wife team of Lennie and wife Jennifer are not happy to rest on their laurels, they’re on the move for a successive quartet of BAV gongs, with Mifsud hinting that he’d like to take on some industry ‘big guns’ in the entry level class later this year.

So what is the Mifsuds formula for success? We sat down with Lennie at his buzzing Campbellfield, Vic, factory to find out…

CW: How did you react on each occasion to your successive BAV victories?

LM: In 2014, it was a big celebration downstairs at OTM HQ. We put on a barbecue and drinks for the staff as they also contributed heavily to the win. I can design a lot of vans, but you also need the valued input of your employees.

Then in 2015, I came up with a few fresh ideas in the form of aluminium/polystyrene/fibreglass composite cladding and an electronics suite, including a lithium battery, all monitored by a FinScan Nucleus controller. We were hopeful of going back-to-back, but to actually win was brilliant.

And the 2016 victory was the cherry on top; it was simply a bonus. We were ecstatic after the second BAV win, but to go three in a row…! In many ways, it’s quite surreal and unexplainable; it’s an achievement you don’t expect.

CW: What impact have the BAV wins had on your business?

LM: There was a time when we were at shows and potential customers would say “we like your vans, but we’ve never heard of you”. These days, unless you’ve been living under a rock, practically everyone is aware of OTM. BAV has put us on the map; it has given us a presence.

LM: We’re hoping for a guernsey this year and possibly to emulate Patriot Campers, which have notched four consecutive wins in the camper trailer equivalent [CW’s sister magazine Camper Trailer Australia’s Camper Trailer of the Year]. With quality comes price and we won the top class in 2014, followed by back-to-back wins in the middle category. But I’d love to compete in the affordable classification and give manufacturers like Jayco and New Age a run for their money if they participate.

CW: Aside from BAV success, how has OTM forged its reputation in the RV industry?

LM: You’ve got to do things properly and be totally scrupulous. We’ve never taken a cent we didn’t deserve from a grey nomad. Okay, we’re not perfect but I build a caravan for our clientele like I would build it for myself. We also organise an annual road trip where I have to show my face to our customers. There was a convoy of just over 15 vans at Birdsville in 2015, then almost 30 vans at Seventeen Seventy last year, and this year we’re expecting at least 65 vans at Lightning Ridge. It just wouldn’t happen if I wasn’t proud of the OTM product and an honest person. So I think we must be doing something right!

CW: OTM is well-known for its lateral thinking, and you’re considered something of an ‘ideas man’.

LM: I believe my mechanical background allows me to think outside the square, to make things work differently. Perhaps the apple doesn’t fall far from the tree, as my dad [Joe, 76] operated a small caravan manufacturing company. He started in 1968 and never built a bad van. He’s retired now but helps out at OTM when mum lets him out of the house. And I still build caravans along old-school lines; I build them tough.

CW: What is OTM’s point of difference?

LM: I’m constantly striving for differentiation, anything that will keep OTM one step ahead of the field, and implementing weight saving/structural strength initiatives in our vans is an example that immediately comes to mind. I also have a genuine passion for getting grey nomads out exploring Australia – obviously in an OTM van. And I’m all into customer satisfaction; it’s of paramount importance. It’s difficult to conceal my delight when I notice the smiles on customers’ faces when they pick up their vans.

CW: OTM has an inimitable style… where do you draw that inspiration?

LM: I think we have our own unique look. A caravan has to flow; it’s not a ‘box on wheels’. And I reckon there’s a positivity associated with being slightly audacious and daring – a little out of left of field. For instance, take our black and green corporate colours; they’re not everyone’s cup of tea but appeal to most caravanners I come across.

CW: OTM has four models with a range of floorplans. What is your favourite?

LM: We’re one of the leaders in the offroad genre, but we also produce on-road and semi-offroad vans. Our flagship is the Grenade Series II, but at the moment my favourite van is the Vortex. I’m a mad fisherman and it allows me to take my tinnie away.

LM: Initially it was an enjoyable hobby, and I must say it’s still gratifying. I’m an auto-electrician by trade who ventured into caravan building. I first put the OTM product out in the market during a caravan show at Caulfield Racecourse in 2007 and it snowballed from there.

CW: You’ve journeyed to most corners of Oz. What is your most memorable trip?

LM: As far as I’m concerned, caravanning is all about family. I could reminisce all day on our adventures in and around Australia. But the best trip I’ve ever done is Queensland’s Bass to Barra Trail (which starts in Emerald and ends in Tinaroo) with three Grenades in 2013. It was three families and 13 people in all, and we had an absolute ball.

CW: What bucket-list destination would you recommend to the intrepid caravanner?

LM: Proserpine, near Airlie Beach, is possibly my favourite spot in the world. It’s a truly memorable place and the fishing is fantastic.

CW: What does the future hold for OTM?

LM: I don’t continually gaze into a crystal ball but I’m planning to be here until I retire. It’s a long way down the track, but I’ve got mouths to feed. We’re in for the long haul, and only God knows what we can achieve in the next 10-15 years. It’s always a challenge adapting to changes but it’s also exciting.

The full Q&A feature appeared in Caravan World #562. Subscribe today for the latest caravan reviews and news every month!