The morning sun skipped on Pumicestone Passage when I arrived at the southern gateway to the Sunshine Coast – Caloundra. I was joining countless other sunseekers on a balmy autumn morning.

Pumicestone Passage is a narrow, shallow, yet beautiful, waterway that arches north from Deception Bay near Brisbane and empties into the ocean at Bulcock Beach, Caloundra, hugging Bribie Island for most of its 35km length. 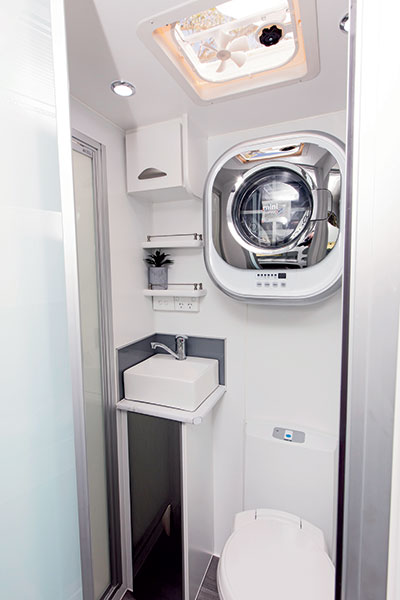 On this day, I was looking forward to checking out two of Sunseeker Caravans’ latest models, the curiously named Wild Child and the never-before-seen Golden Child, while soaking up a little Sunshine Coast sun. In fact, this was an exclusive; a first-hand, no-holds-barred look at Golden Child.

On the Sunshine Coast, autumn means blue-sky days, good bream fishing and family memories built in an environment of aquamarine, gold and green.

The first thing you’ll notice about Sunseeker’s caravans is their trademark splashes of colour. The Golden Child has a stunning livery of gold flames on a backdrop of silver and black.

While looks, obviously, don’t tell the whole story of a caravan, the van offers lively and stylish facade likely to catch the attention of folk that have a certain je ne sais quoi. The Golden Child evokes ideas of the well-mannered, successful, do-no-wrong kid.

The Golden Child is the latest addition to Sunseeker’s stable and Caravan World got the first look at it in advance of its official release at the Queensland Caravan, Camping and Touring Supershow in June (Brisbane Showgrounds, June 7-12).

From hitch to the rear bumper, the Golden Child comes in at a smidge under 8m with a body length of around 6m. It’s about the right size for a family van without being too tight for living space or too cumbersome for towing.

While it includes, fundamentally, the same chassis as its cousin, the Wild Child, with a sturdy 150mm A-frame and 100mm main rails, it is really a blacktop tourer. That’s because the Golden Child is rolling on basic rocker roller beam axles with leaf spring suspension.

Checkerplate wraps around all four composite walls and, sitting on the chassis, a marine ply floor with a waterproof membrane completes the structural package that includes an aluminium frame.

Marine ply flooring is deliberate choice, made with the intention to maintain a certain purchase price point without the financial impact of composite resin-style floors. As a ply, marine ply is considered a Rolls-Royce product, employing the highest grade veneers from selected species based on density, bending strength, impact resistance and surface finishing characteristics. Not too shabby for highway touring!

Also noteworthy is the one-piece fibreglass roof common to other Sunseeker models, double-glazed windows, tunnel boot, extra roadside storage boot and stoneshield covering the front window, 150W solar panel with a 30A solar regulator, and small details like the checkerplate protection for the drawbar tap.

Up front, you’ll find a basic ball hitch. While some decry them as a little outdated, they’re perfect for the job and they’re inexpensive. The downside is they’re sometimes tricky to use on uneven ground. However, this is essentially a blacktop tourer where uneven ground is normally not par for the course, so I think it’s entirely appropriate.

Step inside the Golden Child and you find a van interior that matches the panache of the exterior.

Kitchen-wise, the travelling cook won’t be disappointed with the Swift cooker, a large two-door Thetford fridge and microwave, with sufficient storage for your beans and pasta – you’re well set for a little masterchef caravanning action.

As for the ensuite, my proven test is whether or not there’s enough room to pick up the soap if you drop it in the shower. Although not the most spacious shower, and it does take a little manoeuvring, there is just enough room to pass my soap test.

But the real trick to creating extra space in this caravan is the use of an east-west caravan-queen-size bed. That arrangement provides the space you need to fit in the kids’ bunks, which are cradled beside plenty of storage and with large windows providing plenty of ventilation to help them get through those steamy tropical nights.

While the Golden Child is set up for comfortable nights in a family-friendly holiday park or a gentle caravanning experience, the Wild Child is a different beast.

As family vans go, Sunseeker’s new Golden Child has a lot going for it. With a Tare weight of 2250kg, a medium-sized SUV will handle towing duty. Better still, an ATM of 2900kg means you’ve got plenty of capacity for a full load of water and plenty of odds and ends for the kids. Add in a modest ball weight and tandem axles and it doesn’t just look the part, it’s also set to tow well down the highway.