There’s a new trend that’s taking off in the world of caravans – the slide-out external kitchen. They’ve been around for several years in the camper trailer market, both in canvas folding models and hybrids. But up until recently, they were not very common in caravans; the closest we saw was the more common slide-out barbecue.

When I took the Titan Eclipse 560 caravan out for a spin, I nearly missed the external kitchen entirely during my initial inspection because the camper trailer-style slide-out kitchen fits neatly into a normal front tunnel storage bin. There were no visual clues to the inclusion of an external kitchen and it was only when I opened the bin door that I made the discovery. 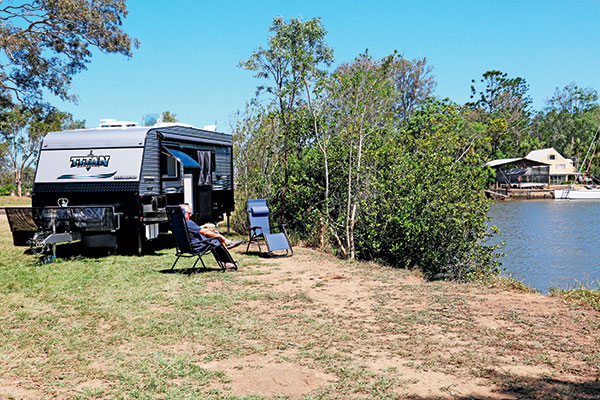 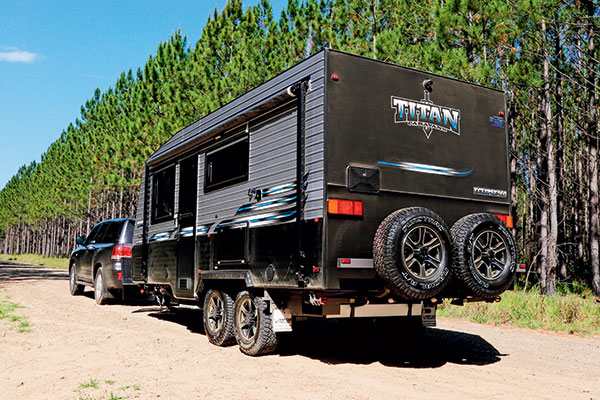 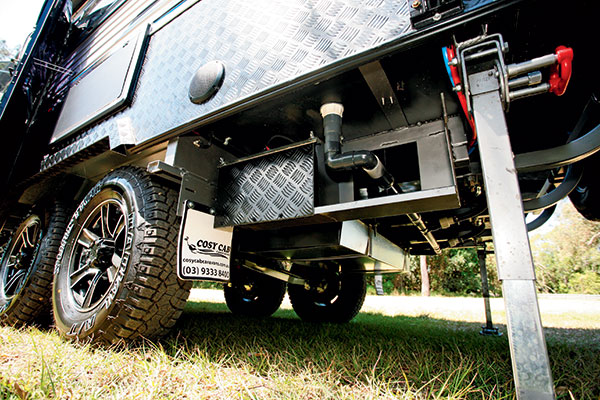 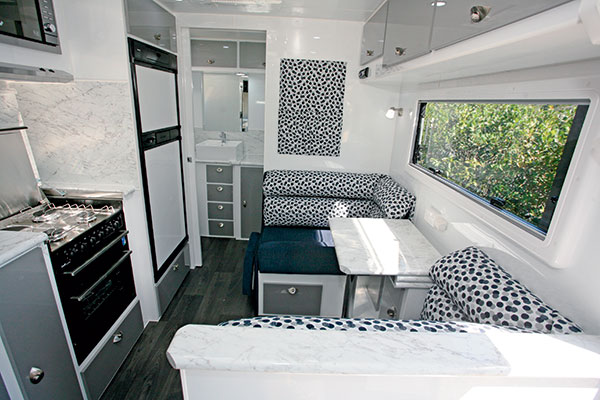 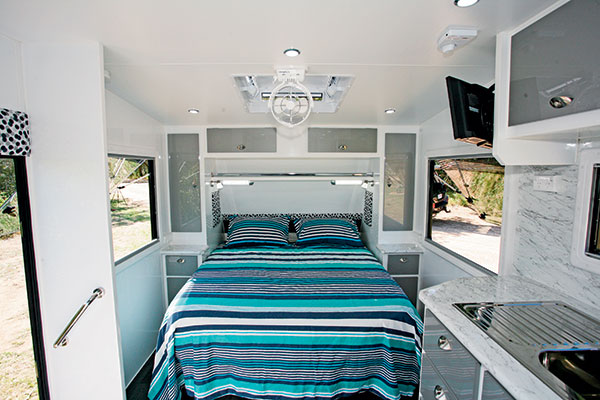 Of course, there is more to the Eclipse 560 than an external kitchen but it’s worth harping on it for a moment longer; this one consists of a barbecue and a stainless steel sink complete with a hot and cold water mixer tap.

The van itself is a 5.8m (19ft) tandem-axle unit that has clearly been built with a view to exploring some of the back blocks of Australia.

One of the clues to that lies in the suspension system. AL-KO has been making moves to cover all the necessary caravan suspension categories and its Enduro Outback independent setup, launched in 2016, is evidence of that. Having been designed and built in Australia, it’s not a system you’ll find on any of the European imports and it comes complete with coil springs, trailing arms and two shock absorbers per wheel – which are actually made in AL-KO’s factory in Spain.

A look under the van reveals a DuraGal chassis that is definitely built in Australia. It’s got the traditional Aussie look about it with its box section style, 100x50mm (4x2in) main rails and 150x50mm (6x2in) drawbar rails with a 100x50mm (4x2in) extension back to the suspension mounts. A standard bumper bar is bolted to the rear section and is used as a wheel mount for the two spares.

Forward of the suspension mounts, between the rails, are two 90L fresh water tanks and behind the wheels is a 60L grey water tank with the drain point fitted to the offside. The battery box is fitted to the nearside rail, aft of the wheels in a different position to the norm. All the cabling and pipework, including that for the slide-out kitchen, appears to be strapped up out of harm’s way and all three water tanks have gal-sheet protection, which is good to see on an offroad-capable van.

Often, kitchen in vans of this length lack benchtop space and storage capacity. But the Titan Eclipse scores points in both categories. The nominal benchtop space is helped by the shape of the kitchen and also by the flush lid of the cooktop. And four drawers, an end cupboard with shelves, a second cupboard and a wire basket pantry all make a contribution to the storage capacity. There are also overhead lockers but the space above the cooktop is used by the microwave. Sitting between the kitche n bench and the bathroom is the necessary 181L Thetford three-way fridge with small lockers above and below.

Although the cafe-style dinette looks pretty simple, it has a surprising number of features. In addition to the multi-fold table, 240V and 12V outlets above the table and the cupboard under the table, there are footrests on the end of the seats and drawers that open inwards – I always prefer that style; they’re much easier to use than fiddling with removing the seat cushions and hinged plysheet covers to access the storage space underneath. The only issue I noticed is that the seats are fairly close together. There are also overhead lockers with reading lights fitted. Instead of storage space, the end locker is the mounting point for the radio/CD player and the electrical control panel with the 12V fuses, a solar panel regulator, a water tank gauge and the hot water switch.

It’s a bit of a tight fit but the Eclipse’s bathroom is very contemporary with a nearside shower cubicle, offside cassette toilet and a vanity cabinet along the rear wall. Like the kitchen bench, the vanity has multiple drawers plus an adjoining cabinet for a top-loading washing machine. There is also a linen cupboard and a couple of overhead lockers. Two ceiling fan vents and a small window supply the ventilation. It’s a tad tight around the loo but it’s all there.

Probably the most surprising thing about the bedroom is that although the bed has a length of 1.9m (6ft 3in) – most stop about 50mm shorter – there is still room to walk around both sides, even with the entry door partition and the extra kitchen cupboard on the other side. It’s in keeping with well appointed bedroom in general. As well as the wall lights, there are 240V and 12V sockets fitted to the bedside cabinets on both sides, a shelf under the overhead lockers and a good-sized drawer under the bed. The metal framed, posture slat bed base lifts easily to get to storage area underneath.

This Titan Eclipse has a Tare of 2384kg and an ATM of 2900kg, giving a respectable payload of 516kg. Unladen, the ball weight comes in at around 200kg but with the storage box and full jerry cans on the drawbar and the two water tanks forward of the wheels, that could increase considerably, so it’s something to keep in mind when loading the van.

I started this article by mentioning the slide-out kitchen, which might seem an odd choice, but it’s indicative of a van that is well equipped for an easy, outdoor lifestyle. But it is equally well equipped on the inside, too. And for a caravan that is neither overly long nor excessively heavy, it’s a good towing proposition.

The full test appears in Caravan World #560 2017. Subscribe today for the latest caravan reviews and news every month!