In the lineup of caravans present at AL-KO Best Aussie Vans 2016, Winnebago’s Mossman B was practically in a category of its own. The majority of the other contenders were offroad caravans and none, except the Mossman B, had a slide-out. And that led to another refreshing difference – the Mossman B’s east-west bed which sits in the slide-out.

While it was up against two offroad vans in this category, the scoring criteria allows the judges to score each van on its own merits. It may not have the same offroad features but what’s more important to me is how the van stacks up for the purpose for which it was built. In this case, it’s an on-road van with some rough-road capability and plenty of interior living space.

I’ll examine the latter item first. The Mossman B has an external length of 6.82m (22ft 4in), so there is plenty of interior space to play. The offside slide-out adds 1.55x0.9m (5ft 1in x 3ft), resulting in an open plan layout that has a front club-style lounge/dinette with a kitchen area immediately behind it. A pantry at the end of the kitchen bench and wardrobe behind the fridge provide a little separation for the bedroom and large bathroom across the rear. 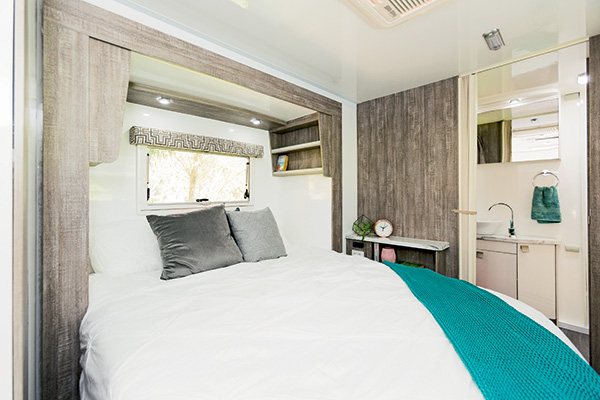 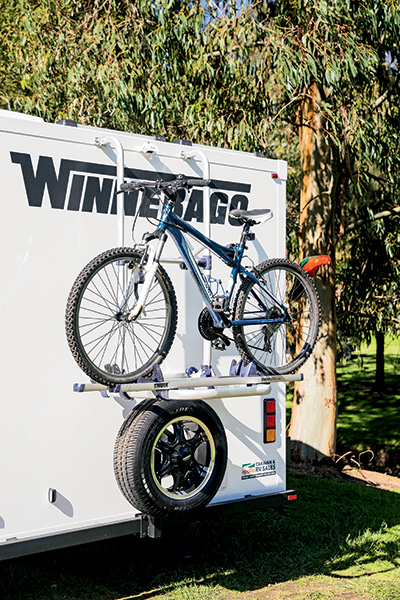 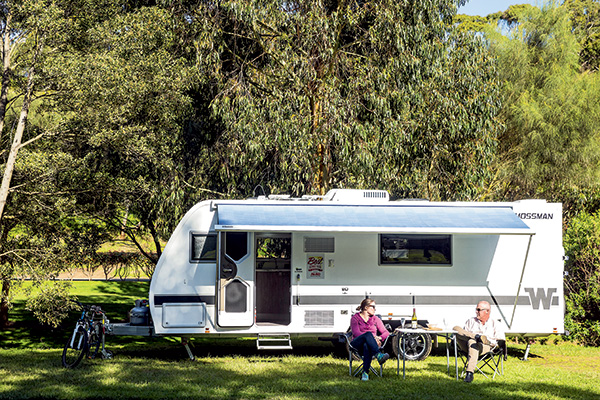 Winnebago has opted for a lighter coloured décor that is a mixture of a faux timber look, laminated benchtops and white walls. Along with the plentiful window space and roof hatches, it creates a very light interior. All the windows have pelmets but no curtains, just the integrated blind and screen in the window frame. Given the shelf space at the front, power outlets (240V and 12V/5V USB) would be handy.

Space is the theme of the front lounge with roomy dinette seating and a large Lagun swivel-mounted table. But given the size of the table, I thought a Zwaardvis mounting would offer a more stable table, if you’ll pardon the rhyming. There’s certainly plenty of storage around the dinette, with overhead lockers all-round and two handy bins behind the front seat. Part of this section is taken by the cushions that can be used to make up a second bed if needed – the cushions fill the space above the lowered table.

Meanwhile, the kitchen has a square appearance but also has a reasonable amount of storage space – overhead lockers, drawers, cupboards, floor lockers and a wire basket slide-out pantry. There are, of course, those other essentials: stainless steel sink sans drainer and a three-burner (one is electric, and two are gas).

On the opposite side, the cabinet not only contains the 190L fridge, with microwave oven above, but also the radio unit and a centrally mounted control panel with 12V and 240V switching, solar panel regulator and water tank gauges. Handily, the forward-facing wall is not only the flatscreen TV mounting point (which can easily be seen from the dinette) but also a few shelves which can be used for smaller items, from either inside or outside the van. Adjoining the fridge cabinet towards the rear is a full-height multi-shelf cupboard providing several storage options for the kitchen or bedroom. A cupboard on the opposite side is the same.

Fitting the 1.98x1.53m (6ft 6in x 5ft) bed into the slide-out means there are less restrictions on bed length, but there is the problem of limited access to the rear of the van when the slide-out is closed up. That’s the price you pay for having a cabinet fitted under the nearside window – although it does comprise ample cupboards and drawers, not to mention decent shelf space. Mounted on the forward end are a flatscreen TV and mains powerpoints. Both sides of the bed have a set of narrow shelves in the top of the slide-out and the rear bed occupant even gets a small bedside cabinet.

On either side of the nearside bathroom wall are more full-height cupboards, one offering hanging space and the other in the bathroom being multi-shelved – there’s no shortage of general storage in this caravan at all!

Like the rest of the van, the bathroom is quite spacious with all the expected features – good-sized shower cubicle, Thetford cassette toilet and a vanity cabinet complete with washbasin. Instead of overhead lockers, there is a three-door mirrored shaving cabinet with open shelves above the washing machine in the rear offside corner.

In addition to the vent fan above the shower cubicle, a large window above the toilet also supplies essential ventilation.

Although Winnebago has opted for a 150mm (6in) railed chassis and drawbar the box section structure is much simpler than is often seen, with less than the usual cross-members. Much of the steel work is around the centre of the van where the mountings are for the tandem-axle AL-KO independent rubber suspension (IRS).

Also fitted on either side of the axles are the two 82L fresh water tanks.

Composite panelling just about sums up the bodywork of the Mossman, with a gel-coated finish used for the interior and exterior of the van. To minimise water leaks, the front wall, side walls, rear panel and roof are all one-piece. For all the external storage, a large front tunnel boot is built in. Apart from the batteries and related charger and inverter, it’s mostly free space useful for other items.

A surprise on this van is the extensive options list. Some items, such as the extra battery and solar panel might be regarded as standard features. However, it depends very much on how you travel. Anyone planning on staying in a caravan park most nights really isn’t going to need the extra capacity but it’s a different matter for those planning remote camping. A reversing camera might sound like an expensive luxury but for a van of this length it’s a handy item. It’s your choice really.

So does the Winnebago Mossman B meet the requirements of an on-road van for mid-to-long term touring? I think so. It’s certainly designed with general relaxation in mind, starting at the front of the van in the club lounge and working its way back.

I don’t see any particular disadvantage in this not being an offroad caravan – there are plenty of travellers who spend most of their time on sealed roads or well-graded national park type roads and just want a caravan built for that purpose.