One of the first things that came to mind when I saw Legend Caravans’ entry at Best Aussie  Vans was ‘solid’, and that opinion was further enhanced when I learned the van’s moniker – the Groundbreaker Ultimate.

Caravans are, by their nature, usually pretty solid objects to start with, but what sets the Groundbreaker apart from many in the crowd is its tough shape and purposeful air. It looks beefy and strong right off the bat; it has a waistline of black alloy checkerplate, common in many offroad vans; it comes with very sturdy nudge bars, Mickey Thompson tyres (including two spares on the rear bumper) and an impressive black, white and burgundy colour scheme. And that’s not to mention the other offroad essentials like the DO35 hitch, mesh stoneguard at the front and jerry can holders at the rear.

So does the Groundbreaker live up to its name? As always with such vans, I started with what lies underneath. And due to its high ride height as an offroad van, it was quite easy to delve underneath. The 150x50mm (6x2in) RHS rails used for the drawbar and dual chassis rails are pretty standard for this type of van and the G&S independent trailing arm suspension with coil springs and shock absorbers fitted inside the coil springs looks the park. 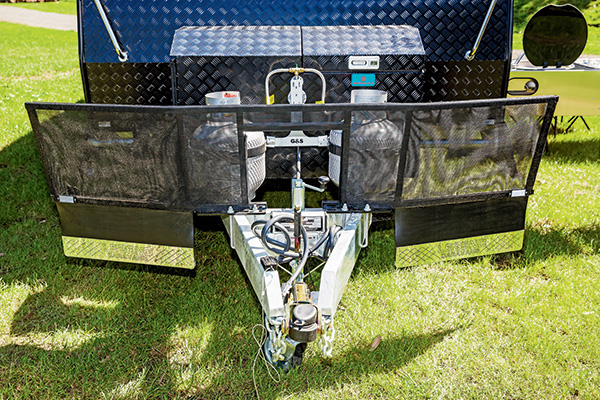 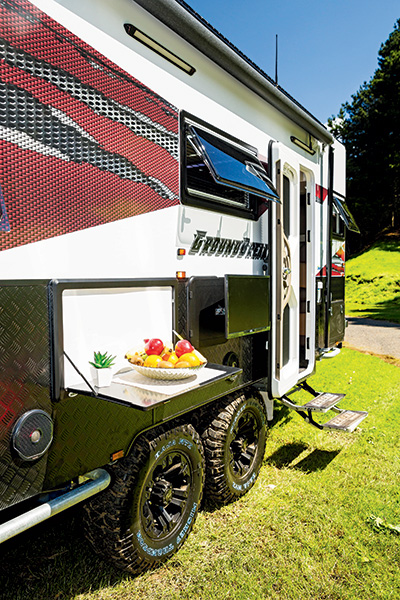 What I did notice about the chassis, apart from the large, shiny Legend logo attached to the front rails on both sides, is that it’s very clean. By that I mean that everything – floor, piping/cabling and water tanks – is enclosed by alloy checkerplate cladding. Apart from having a protective function, it also looks good – something really only appreciated by those who have a penchant for inspecting the sub-chassis – like me! There are three concealed water tanks – 2x95L (fresh) and 1x110L (grey).

Above the chassis, the body of the van has a timber frame but it’s laminated poplar rather than the more traditional meranti timber. It’s all insulated, of course, and the outside cladding is aluminium composite.

The van is fitted with a Dometic glass insert style entry door, and external lighting is certainly a feature of the Groundbreaker, with not only the normal lighting on the nearside but two big LED bars back and front, as well as a strip light on the offside. The external lighting isn’t only convenient; it’s also great for security.

External storage is another feature of the Groundbreaker with tunnel boots front and rear, along with a large alloy checkerplate storage bin on the drawbar. Some of it is dedicated for items like the external slide-out kitchen at the front but there’s plenty of capacity. I must give my usual caveat here, though – even though the van has a load capacity of 500kg, it would be wise to keep an eye on both the loaded weight and the ball weight once you’re packed up and ready to hit the road.

Outside living under the awning really isn’t a problem with the stainless steel slide-out kitchen being well-equipped with sink, cooktop and barbecue. There’s the requisite fold-out picnic table plus an entertainment unit with TV mounting and external speakers along the wall.

Electrically, this is a very well-equipped van. Two 120Ah batteries, located in the rear tunnel boot, are charged by a 30A mains charger and two 150W solar panels. LED lights are fitted everywhere and there’s a decent sound/entertainment system.

I noted with interest that, although this is just a 6.58m (21ft 7in) van, the manufacturer has resisted the temptation to fit a front bedroom/rear bathroom, instead opting for a front bedroom/mid-bathroom/rear club lounge setup. For some, there are advantages in having the bathroom next to the bedroom and there’s no doubt about the asset of a club lounge in the rear – room to relax and watch the world go by through the all-round windows.

Glossy laminated cabinetry and leathered upholstery sum up the internal decor and it’s all beautifully finished. That includes all the LED lighting – concealed and visible.

In addition to comfy seating, the rear lounge comes with a table fitted on a sturdy but any-which-way mounting, 240V and 12V/5V USB outlets and overhead lockers all-round, of which taller persons will need to be mindful when getting in or out of the dinette.

One of the products of this layout is the large split kitchen which has benches on both sides. The nearside is a semi-L-shape, with a stainless steel sink/drainer and space for a coffee maker. The bathroom wall space is used for a microwave oven in the overhead locker area and a 24in flat screen TV below.

Both the 190L Dometic fridge and Swift four-burner cooktop/grill/oven are fitted on the opposite side. What this kitchen layout allows for is plenty of cupboard, drawer and overhead locker space. Cooks who like to travel with plenty of food will have no problems here.

The overhead locker space is used for other functions, as well as storage. Above the cooktop is the electrical control panel while the radio sits above the sink. Like the rest of the van, all the drawers have metal sides and the doors have piano hinges.

Bathroom space isn’t really an issue, with the split bathroom having a good-sized shower cubicle on the nearside and toilet/washroom and laundry on the offside. It’s all very well-appointed with a ceramic washbasin, good-sized towel rails, powerpoints, vent hatches and a window, at least for the toilet side. If needs be, the bathroom can be closed off from both sides.

Up front, the 1.85x1.5m (6ft 1in x 5ft) island bed sits in a bedhead of side wardrobes, overhead lockers and bedside cabinets. I liked the bedside compartments cut into the lower wardrobe area, along with the Truma gas heater control right by the offside occupant. In winter, the bed would be a very warm place because the heater is located right under it!

Like the rear zone, there are 240V and 12V/5V USB outlets fitted but they are located inside the wardrobes – the base being good for charging devices. A second 24in TV is fitted into a recessed compartment in the shower wall and can be seen easily from the bed.

I inferred at the start of this article that the van had a ‘solid’ appearance but to be more correct, it has a fitness for purpose air about it.

It is built for offroad use and designed for a comfortable lifestyle on or off the road. Not only does it have plenty of storage space for all those ‘essentials’ we like to take along, but it also has a very user-friendly layout which is refreshingly different from many.