Every now and then, an Australian-built caravan that is different to the mainstream product appears, and I’m always interested to check them out. That was the case with Silversun’s Neptune 402D.

So what’s the most interesting feature of the Neptune 402D? In short, it’s a full caravan, but it has a Tare weight of only 1050kg! This lightweight package has an external length of just 4.02m (13ft 2in) and includes an onboard bathroom with separate shower and toilet. But there are a few compromises, of course. For example, the much-prized island bed isn’t a possibility in a van of this size and if you opt for the double bed layout seen in our review van, you’ll have to make the bed up every night.

Inside, you find a layout that offers a surprising amount of practicality for its size. Up the front are two sideways-facing lounges with a table in between. A half-height wardrobe with both hanging space and shelving is fitted along the nearside wall and a surprisingly large bathroom fills the rear offside corner, meaning the kitchen bench is divided between the rear wall and the mid-offside wall. 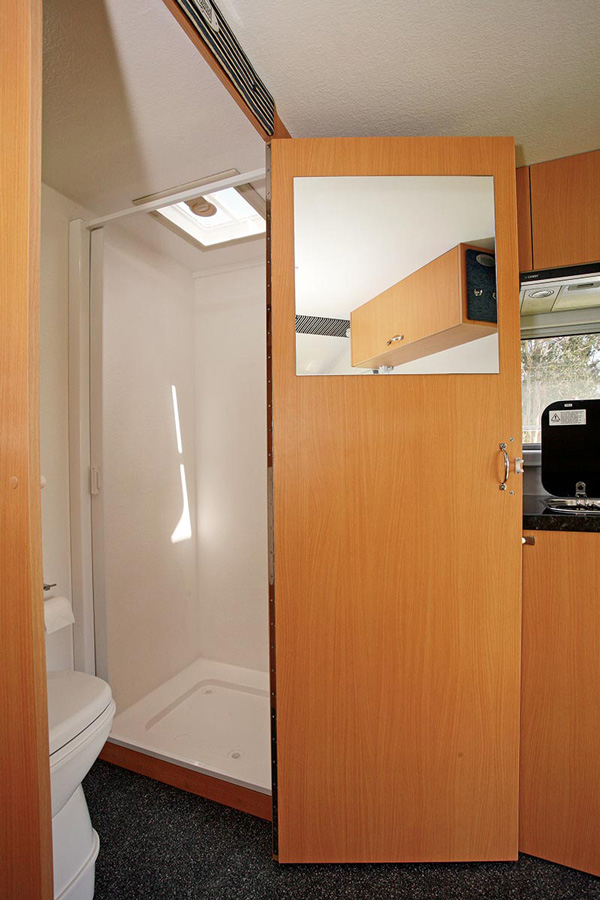 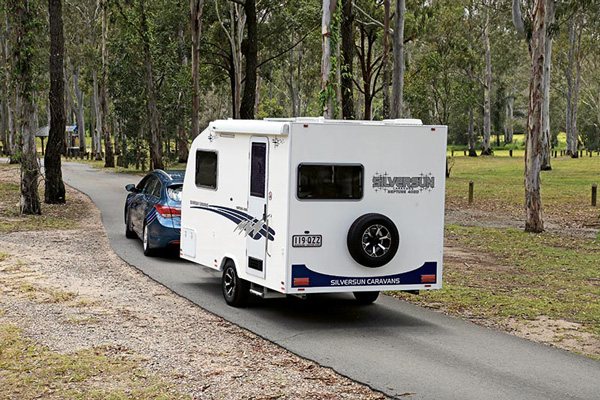 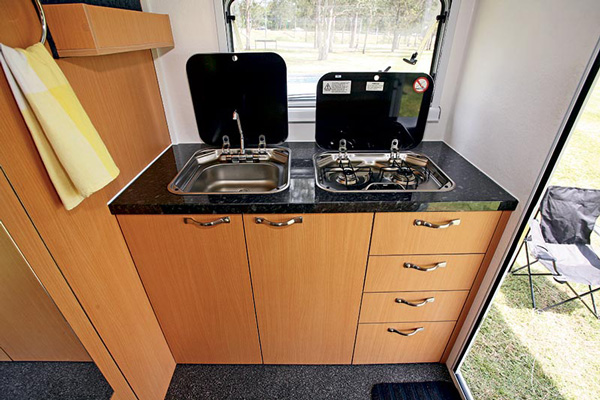 Silversun has also included a couple of really useful items such as the lipped shelves that are fitted to the cabinet by the entry door, which are handy for storing items like your keys, torch, phone and iPad.

Setting up the double bed is simply a matter of lowering the dinette table and filling in the centre area with the seat cushions. It’s easy to do, although fully making the bed each night takes a little longer.

The Neptune is also available with a single bed layout, which offers benefits for those who don’t like setting up the bed every night. In this version, the mid-section cabinets are shorter, which allows for longer sideways-facing lounges to be fitted up front. These are used as single beds and can be left made up during the day.

Given the adjoining bathroom cubicle, the rear kitchen bench is quite short – just long enough for a two-burner cooktop and a square stainless steel sink, both with smoked glass lids. Under the bench are a two-door cupboard and four good-sized drawers. Two overhead lockers and a rangehood are fitted above the kitchen bench.

On the other side of the bathroom are the rest of the kitchen facilities – a Sphere microwave in the overhead locker and a Waeco 136L fridge under the benchtop. Although this is quite a small van, there is actually plenty of available benchtop space, once you consider the two cabinets in the middle. Alongside the fridge is a wire basket pantry, slightly wider than usual, with fixed wire baskets fitted on individual metal runners.

The bathroom is quite a good size for a small van, with room for a separate shower cubicle along with a Thetford cassette toilet and a small cupboard. There is no wash basin but I don’t see that as a major disadvantage. A small mirror is fitted inside the bathroom door and there’s a larger one on the outside of the door.

Probably the most surprising thing about the Neptune is just how much has been squeezed into it. Long-time readers might remember similar-sized caravans that had little more than a kitchen and a bed, but the Neptune is surprisingly well-appointed with kitchen, bathroom and living area/bedroom.

Even with all that onboard, it is still a relatively lightweight caravan and has a budget price to match!