When I called the Queensland dealer for Option RV, also fortuitously named Caravan World, managing director Brad Pendleton handled my request for a van with his usual aplomb; his only query being which model I would like. A recent arrival in his yard was a 7.15m (23ft 6in) Distinction with a big bathroom, but what Pendleton didn’t make clear was how big he actually meant! More on that later, though.

Inside the Distinction, the layout is the somewhat familiar front bedroom, rear bathroom arrangement with the dinette and kitchen in between, but the 7.15m (23ft 6in) body length gives plenty of latitude for the designers. There is a good-sized kitchen and dinette, but the large bathroom is the real standout. The big windows, with two large fore and aft marine-style hatches, do a lot for the interior lighting.

The decor is modern and contemporary, but is certainly not stark. Instead, the lighter colours are nicely offset by the marble look of the benchtop and splashback laminate, along with the beige leather of the upholstery and the glossy finish of the overhead lockers. Even the central downlights come with their own mounting that matches the overhead lockers – a nice touch. All the cupboards and drawers come with easy-to-use catches but they are on the small side and could be a little fiddly for those with less than flexible fingers. 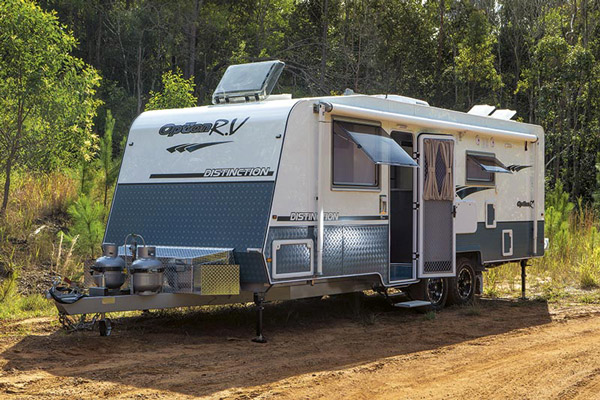 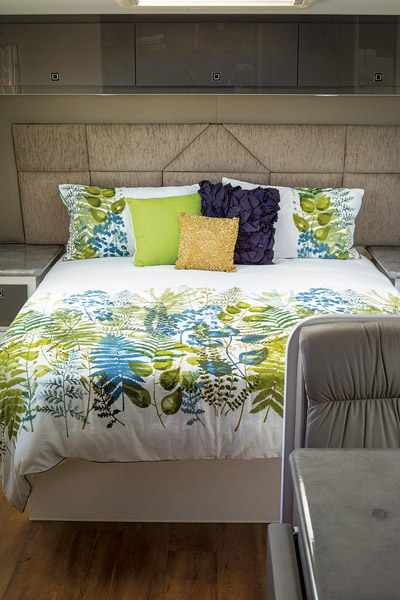 Like any good caravan, this one comes with an excellent Kenwood sound system with internal and external speakers. The Kenwood includes a radio and CD player with both a USB and 3.5mm socket for connecting external devices. Like many other caravans, it doesn’t have an adjacent shelf/pocket for said devices.

Up front, the bedroom looks less cluttered than usual because, with the wardrobe in the bathroom, the island bed does not have the usual side wardrobes. There are overhead lockers and handy bedside cabinets, though. Even with the adjoining club lounge, there is still a reasonable amount of space to walk around the bed, and windows on either side give good cross-flow ventilation.

The kitchen is a generous size. With the two-door 190L fridge fitting in between the offside dinette and the bathroom wall, the nearside is left to accommodate the bench, with one end angled, allowing a fair bit of benchtop, cupboard and drawer space. Like all the drawers in the van, the kitchen ones have a metal frame and runners. Also on the bench are the stainless steel sink with drainer and a four burner cooktop with both grill and oven. The cooktop has a matching flush top which creates additional bench space when not in use. There’s also a microwave above the sink in the overhead lockers.

Opposite the kitchen bench, the dinette is spacious enough to be a club-style lounge and even though the seat ends are not particularly long there are hinged footrests at each end. Although not really movable, the table has two mounting poles, which give it good stability.

That leaves the offside wall for a vanity cabinet with a contemporary wash basin, under-bench cupboard space and a larger-than-usual 7.5kg inverter direct drive LG washing machine. In addition, there’s a wardrobe on the mid-rear wall, complete with hanging space, drawers and mirrors on the doors.

Undoubtedly, the real feature item on this Option RV Distinction is the rear bathroom – it’s so big! And, happily, it doesn’t come at the expense of the practicality of anything else. In addition, the bathroom, while still having all the expected features, including a washing machine, also comes with extra wardrobe and drawer space.

Option RV doesn’t make any claims about this Distinction being an offroad van, but it is certainly rough road-capable and it comes with everything needed to make it good for extended remote camping.

I would have liked…