Review: On the Move Ultimate Escape

You can sense the creativity coursing through Lennie Mifsud’s veins. He’s the owner of On The Move Caravans, the company behind the latest super-innovative caravan to hit the Aussie RV scene, otherwise known as The Ultimate Escape.

"I don’t sleep at night – my brain just keeps ticking over!" says Lennie, with a chuckle. "I just love manufacturing," he adds. You see, Lennie dreamed up and for the most part built The Ultimate Escape himself. In the past he’s also designed and built a decent-sized boat, and he even built his own house – this is one handy guy! 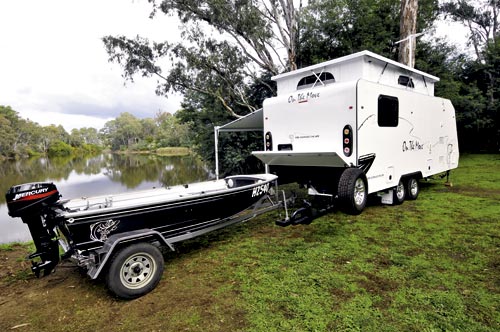 An auto electrician by trade, and with experience in cabinet making before that, Lennie’s clearly not afraid of taking on a challenge. "A few years ago, when I said I wanted to build a caravan with a boat inside it, people said it was impossible – but that just made me all the more determined," he says.

That’s right, this is far from your average pop-top, for within it rests a 3.4m tinnie. In this instance it was Lennie’s own personal fish-fighting platform modified to his specifications, but for customers The Ultimate Escape will come with a 3.4m Savage Jabiru boat, complete with purpose-built trailer and a 15hp Mercury outboard.

Lennie says he actually built The Ultimate Escape back in 2006, to fulfill a personal dream. "I’ve always wanted to take my family on a fishing holiday in the Northern Territory, and I wanted to build a caravan that would let me do that," he says. Since then work has intervened, as it often does, and the van has lurked in Lennie’s garage. Then, last year, Lennie decided to launch On The Move Caravans, and turn The Ultimate Escape into a commercial concern.

It’s one of only two caravan/boat combos on the market, but it comes at the engineering challenge in its own unique way. Launched at Melbourne’s Caravan and Camping Show earlier this year, on its maiden outing The Ultimate Escape attracted plenty of attention – and even a few deposits.

After spending the night in The Ultimate Escape, and getting a thorough grounding in its operation and features, I can see why it’s proving so popular. For keen fishos and their family and friends, this is one clever and versatile RV. For anyone who’s gone through the drama of transporting a tinnie on a tow vehicle’s roof – and manhandling an outboard engine down to the water’s edge – The Ultimate Escape is a godsend.

"It’s great for older blokes who have just about given up on fishing from boats, because of the hassle and physical effort involved," says Lennie, who promptly got the boat from the caravan into the water, single-handed, in about 12 minutes.

How does it work? In a nutshell, the rear bumper (which also carries the outboard) swings out, allowing you to lift a rear tailgate and reveal the boat’s transom. Unscrew the securing bolts either side, fit the trailer’s wheels (a rattle gun is provided), slide the trailer out and you’re halfway there.

The trailer and boat roll out on an overhead gantry, while the bottom of the tinnie is supported by two rollers. Hook the trailer up to your tow vehicle and head for the water – job done!

The custom-built trailer is ready for the road, so you can potentially leave the wife and kids at the caravan, while you tow your tinnie to launching spots near or far. "In that way, it’s really versatile," says Lennie.

Of course, while you’re "simply messing about in boats", in the best Kenneth Grahame sense of the phrase, there could well be problems on the home front if those you’ve left behind are slumming it. Fortunately, in The Ultimate Escape, that’s not going to be an issue.

Step through the forward NCE door and you’ll find yourself in a well-appointed kitchen. It’s compact, with everything at arm’s length, but it’s got just about all the features you’d expect of a luxury caravan. I loved the stainless steel wine cooler (or rubbish bin) in the front nearside corner, and the cabinetry is first rate, featuring neat ‘soft close’ drawers.

There’s a full oven/grill/cooktop, plus a microwave at a sensible height and a 110L Waeco fridge/freezer (a bigger one can be fitted if desired).

Food preparation space is a little limited because the dinette table is up in the main living area (up a couple of steps), but for one customer Lennie added a fold-out section of benchtop to extend across the van’s entrance, which then doubles as a handy serving area for al fresco dining.

There’s a super-generous ceiling height in the kitchen, and in the front offside corner you’ll find a shower cubicle and Thetford loo. The shower isn’t huge – over six-footers will need to stoop a little – but given all the other boxes this van ticks, I’m amazed Lennie was able to squeeze it in at all.

At the top of those aforementioned two steps (the bottom one also doubling as a drawer) you’ll find the living area/bedroom beneath the pop-top. Either side of the short passageway is a nearside mid dinette, able to seat four adults in comfort, and an offside lounge, able to seat another four. The lounge converts into two bunks (1.82x0.65m) in seconds, while the dinette converts to a double bed (1.82x1.06m). The dinette table is a good size, and the quality latex cushioning was good and comfy.

There’s a flatscreen TV at the front of the offside lounge, but it’s one of two – there’s another even larger unit off the nearside foot of the bed. The only one missing out on Today Tonight will be the chef in the kitchen (a lucky escape?).

That leaves the bedroom, where I was impressed not only by the comfort of the pillow-top, innerspring queen mattress (1.9x1.5m), but also by the room to each side. It’s certainly easy to negotiate, and there’s plenty of room off the end of the bed to get dressed in the morning.

The ceiling height up here is also generous, and even at 6ft 2in (1.88m) I was able to pass under the air-conditioning unit with ease.

In general it’s a light and airy feel in the living area, care of the open-plan layout and the sizeable double-glazed NCE windows. The latter are fitted with cassette-style flyscreens/blockout blinds. There’s storage in all the usual places (under the bed, under the dinette, etc.), and while there’s certainly no shortage of it, Lennie says the lounge/bunk section can easily be swapped for a hanging wardrobe – an attractive option for solo couples intent on longer trips.

The quality features continue outside, where you’ll also be seduced by The Ultimate Escape’s smooth, moulded fibreglass exterior. There’s a slide-out Swift barbeque up the front, plus long tunnel storage on each side of the van, with an access hatch at each end. They’re perfect for storing your rods, and they make use of the space just above the wheel arches.

A large Sunburst Eclipse awning will take the sting out of summer days, and there are external speakers hooked up to the Kenwood entertainment system, located next to the offside pantry.

The entire plot rolls on a 6in SupaGal chassis from G&amp;S Chassis, and this particular example rolls on leaf spring roller-rocker suspension (other systems can be adopted). The chassis appeared to be sturdy and of a rugged construction – as did the trellis frame section that encapsulates the boat and trailer.

As for downsides, I could only detect a few – all minor and all easily rectified. A grab handle to help you into the van would be a bonus, as this van sits fairly high – a slide-out step wouldn’t go astray either. A drop-down picnic table is pretty standard these days, so add that to the list, along with padding over the door exit, and also just where you step down from the living area into the kitchen. Like I said, all minor and all easy fixes, should you require them.

If you’re into your fishing and caravanning, this is the van you’ve been waiting for. The Ultimate Escape retails for $105,000 (as shown, ex-Melbourne, tow-away), although Lennie points out a traditional aluminium-clad version will drop that price by about $7000. Those prices include the boat, custom trailer and outboard, plus all the many features detailed in this report, and a whole lot more. It’s a lot of money, but then this is a lot of caravan – and one that seamlessly combines two lifestyle pursuits in the one neat, ready-to-roll package. This is a great design, beautifully executed – and one that’s a credit to its creator’s designing and engineering talent.

With thanks to the Goulburn River Tourist Park, located in Seymour, Vic (www.goulburnrivercp.com), for the photoshoot location.