The plan was simple: three RVs and a trip to one gorgeous outback location, Mungo National Park, NSW. The last time I was up that way – as part of a four-van tour to Broken Hill in 2011 – we’d missed out on Mungo. Heavy rains had turned the unmade access road into red soup.

The disappointment had never left me and I’d remained determined to get there. It was just a question of timing and finding the right caravan for the job. When I saw Trakmaster’s Kimberley Platinum Series pop-top on display at this year’s Victorian Caravan, Camping and Touring Supershow, I knew I’d found the van. And then something rare happened: my schedule opened up. Mungo beckoned. The guys at Trakmaster were only too keen for me to put the Kimberley to an outback test. Was the van as solid as they claimed? If there was a fault in the design, Mungo would find it. 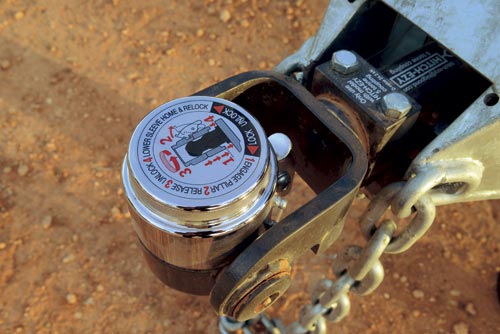 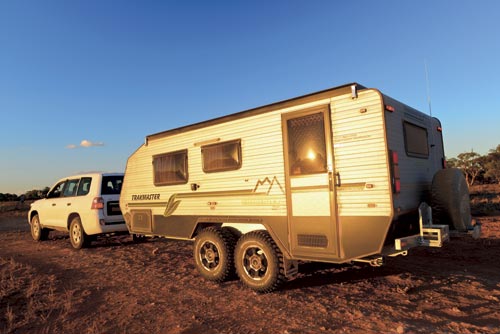 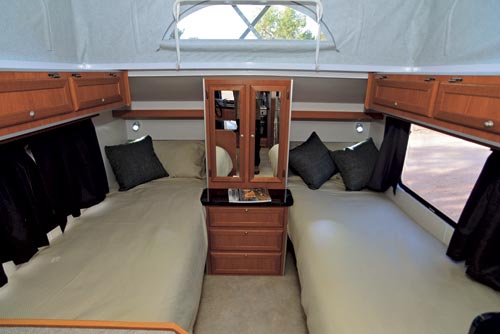 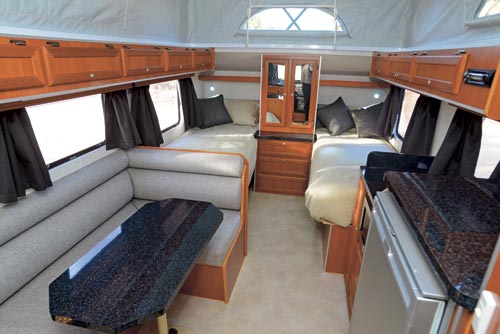 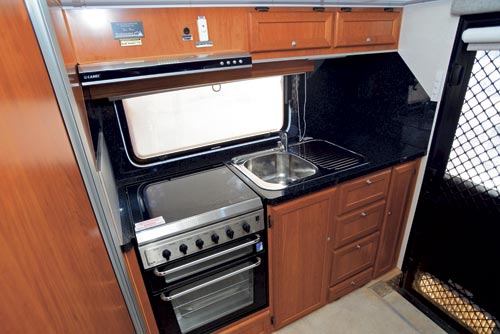 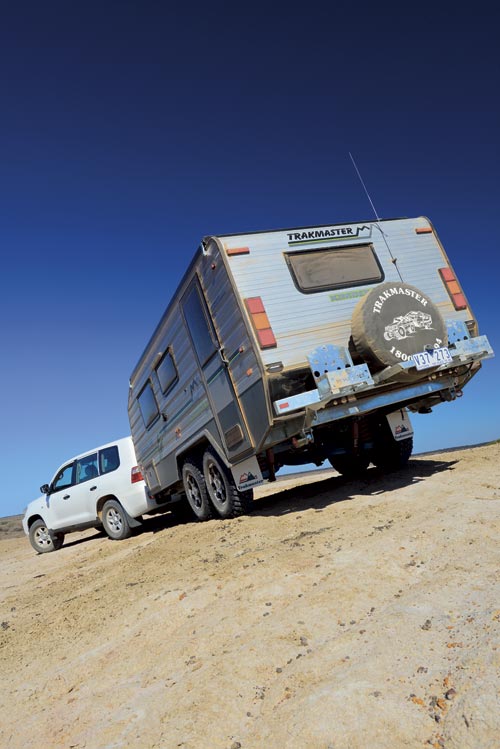 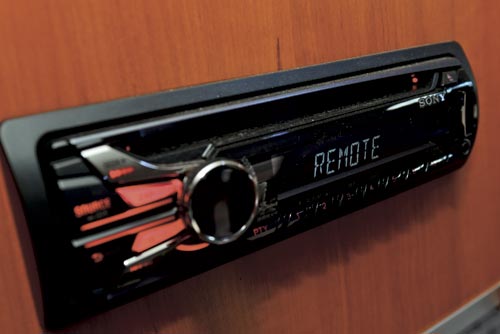 Not far from Balranald, NSW, the bitumen gave way to corrugations and cattle grids. So far, the Kimberley had been perfectly behaved behind my LandCruiser. But this was where the true test would start.

With the other RVs in front, I lagged well behind, out of their dust cloud, concentrating on how the van responded to the uneven, unkind road surface. The independent Sugarglider suspension, with springs and shock absorbers, dispatched the worst of it with ease. The van was tracking as nicely on this terrain as it did on the bitumen. So far, so good.

The Trakmaster Kimberley is available in sizes from 14ft (4.2m) to 15ft 6in (4.7m), in pop-top or full-height, single-axle or tandem-axle, configurations. Our van, the 15ft 6in (internal) tandem pop-top, was designated a Platinum Series, which essentially means it was fitted with lots of extra equipment over a standard Kimberley. The base price of $73,214 will get you into a credible offroad tourer, but the Platinum Series, for $85,990, turns the Kimberley into a pretty serious rig.

What does this money actually buy?

Well, let’s start up the front. There are two 9kg gas cylinders on the drawbar, along with a wire mesh rack, a Vehicle Components handbrake, a dual-clamp jockey wheel, and
a Hitch Ezy coupling.

The front boot is spacious enough for general items, such as camp chairs, tools and the like. And for the fishos out there, the Kimberley gets a right-through storage locker – perfect for fishing rods, etc. And rather than fitting the dual batteries in an awkward-access position, such as under a dinette seat, Trakmaster has located them in an externally accessible locker up front.

The van is also fitted with BFGoodrich mud terrain tyres on 16in alloy rims, enhancing its offroad credibility. There’s a 12V power socket on the nearside, as well as an LED awning light. On the subject of awnings, our test van didn’t have one – but that’s because the supplier at the time of this van’s construction didn’t have one available with black arms to match the van’s black stone protection.

At the rear, there are two jerry can holders mounted to the bumper, along with the
spare wheel.

The most notable offside feature of the Kimberley is its ‘manifold’ system for the water fillers. The van is fitted with one hose inlet for both of the 100L water tanks and connection to mains pressure water. Protected behind a bin door are three switches that regulate water flow, depending on which tank you want to fill, or if you want to hook up to town water. It’s a very easy system to operate.

Chassis-wise, the Kimberley is built on hot-dipped galvanised 6in rails that run the full length of the van. Marine ply (12mm) is glued and screwed to the rails, forming the floor. Everything, from the water tanks to the plumbing, is properly protected, so any stones flicked up by the wheels won’t damage the van’s vital components. For my money, caravan protection – the armour plating that prevents damage – is paramount. In this respect, the Kimberley is very much fit for purpose. After hundreds of kilometres on those outback roads, nothing was damaged beneath, up front, or along the sides.

Have you ever felt a stab of dread before going inside your van for the first time after towing it along some particularly bumpy roads, nervous about what you might find broken inside? I admit it: I’ve had things break on me before, from a shower door to a microwave that busted its moorings. So given our Kimberley was receiving a fairly brutal test, I was apprehensive every time I climbed aboard.

My trepidation, though, proved unfounded. Despite the hammering from those roads, the Kimberley held together in every respect. Nothing broke or bent or ended up where it shouldn’t be.

Some people might prefer their kitchen along the side of the van, rather than the rear, in order to minimise disruptions when entering or exiting the van. But with a bit of coordination, we found the rear kitchen perfectly useable, whether we were cooking or washing up.

In terms of features, the kitchen is fitted with a Swift 500 Series cooktop with griller and oven, a stainless steel Camec rangehood, overhead cupboards, a pots-and-pans drawer, pantry and other drawers.

The 140L Waeco 12V compressor fridge worked well, too, though I always had one eye on the Prostar 30 solar charge controller in the doorway. This good, simple unit shows, at a glance, the load on the batteries (in amps), the state of charge (voltage), and the solar charge (amps) going into the batteries. Did I mention that the Kimberley was fitted with three 120W solar panels on the roof?

Our energy needs throughout the trip were fairly basic: some light at night time and 12V power for the fridge. So with clear skies and good sun for the duration, the twin 100Ah AGM batteries didn’t drop below 12V, except towards the end of the trip when the sun disappeared behind some heavy clouds.

Storage-wise, there are lockers above the nearside dinette and offside bench, beneath which was fitted a Samsung microwave. There’s also a wardrobe between the two single beds up front. Those beds, by the way, measure 1.95x0.8m (6ft 5in x 2ft 7in) – a perfectly comfortable size, I found. There are yet more lockers above both beds. All up, there’s plenty of space for storing all your food and other gear.

Beneath the nearside bed you’ll find a CTEK battery charger, while beneath the other bed is the 23L Suburban hot water heater and water fill manifold. Each bed does get a 12V LED reading light, though at least one at the dinette wouldn’t go astray. The dinette, by the way, is quite comfortable, though the fabric upholstery (albeit a hard-wearing material) is perhaps not quite worthy of an $80K-plus van.

In terms of entertainment, there’s a Sony sound system (with USB input) and Winegard Freevision HDTV antenna with SensarPro signal strength meter. No TV is provided, however.

If someone tells you that pressure hatches in a caravan are a waste of time, it’s only because their’s wasn’t fitted properly. On the drive into Mungo, on those long, red-dirt roads, I intentionally left it closed. Entering the van after unhitching, I found a film of dust, which entered through the mandatory vented door, over everything. Afterwards, I had it open and the van remained a relatively dust-free zone. Pressure hatches do work.

Lighting-wise, the Kimberley is all 12V, with seven LED downlights, and two LED main lights, throughout.

The moulded-fibreglass bathroom in this van is as good as any I’ve seen in a pop-top, with a Thetford bench-style cassette toilet, small corner washbasin, and variable-height shower. It does the job nicely. The air-conditioner, meanwhile, is Dometic’s powerful B3000+ reverse cycle unit.

The Trakmaster Kimberley Platinum Series pop-top was completely unscathed when it came time to leave Mungo. It might be a small rig at a relatively high price – there certainly are cheaper pop-tops around – but there’s no denying it’s built to last. It’s also fitted with some tempting equipment. The three solar panels, for starters, are worth their weight in gold when touring the outback and the 12V compressor fridge works a treat.

If you’re in the market for an offroad pop-top and it’s in your budget, have a look at this rig. My confidence in its offroad ability grew by the day. Truth be told, I was rather sad to hand it back.