Some caravans and/or manufacturers have some odd names – that is, the thinking behind them is not always clear. In this case, however, Spinifex Caravans gives you the idea straight away and it’s not hard to conjure up a picture of an offroad caravan somewhere in the Australian desert.

Spinifex Caravans manufactures custom-built offroad caravans and over the last four or five years has been quietly building a reputation of some note.

When Scott and Helen Rooney along with son Trent were looking around for an offroad caravan, they found their way to the Spinifex factory door with some preliminary ideas. It didn’t take Spinifex proprietor Stephen Thompson long to put those ideas into something more detailed, along with a few thoughts of his own that resulted in a purpose-built, 7.32m (24ft) tandem caravan called the Off Road. 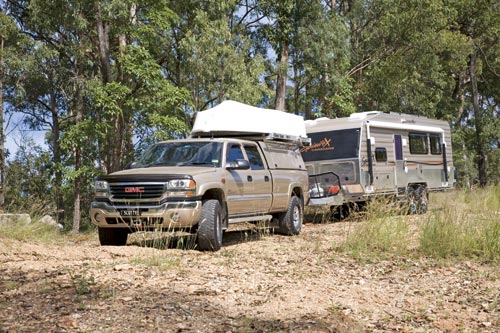 With an ATM of 3500kg, this is no lightweight van to be sure but then barra fishing is a serious business and both Helen and Trent wanted something else to do while Scott was out catching them. Towing is also going to be a serious business but the Rooneys’ 4WD GMC Sierra with its powerful 6.6L, 272kW diesel with 895Nm of torque was certainly up to the task as we put the Spinifex through a few offroad paces.

Of course the Vehicle Components Cruisemaster independent airbag suspension which underpins the Spinifex van helped no end. It was interesting to watch the wheel undulations as the van was driven over some tricky terrain. Vehicle Components also supplied the DO35 hitch at the pointy end.

Above the suspension, the hot-dipped galvanised chassis has 100x50mm (4x2in) tandem rails, although the drawbar is made from larger sized 150x50mm (6x2in) steel. Three 80L polyethylene water tanks are fitted between the rails. Instead of a jockey wheel (not that you’d really be able to move this van), a Trail-A-Mate jack is centrally mounted. Also fitted to the drawbar are two 9kg gas cylinders, two jerry can holders and a stoneguard. Spare wheels are mounted at the rear.

Instead of a single door, the front boot has two hatches. It’s a well-filled boot too with three 120Ah deep cycle batteries and three mounted Flat Out hose reels containing, respectively, a power lead, water hose and drainage hose. A benefit of the Flat Out arrangement is that it stores hoses and leads neatly and space-effectively. Although the front boot might not appear to be very spacious, there is a tunnel boot at the rear and an external bin at the front nearside.

The Spinifex frame is all aluminium. A point of interest is that all the cabling runs through the frame in grommet-fitted holes and along specific lines, not just the shortest route. Naturally the van is insulated under the aluminium cladding, the top half of which is coloured to match the tow vehicle, with the lower half being alloy checkerplate. The awning, especially in an offroad van, is vulnerable to scraping damage but this one has purpose-made covers on each support arm.

HOME AWAY FROM HOME

Inside the van, Scott and Helen opted for a layout that has a rear main bedroom and a front second bedroom which includes the bathroom. Filling the mid-offside area is the kitchen bench with the café-style dinette opposite.

A feature of this van is the large windows, so from both the dinette and rear bedroom there is an excellent view of the surrounding countryside. Another is the timber work – a light-stained hue with darker door frames and window pelmets, it’s all finished in a craftsmanlike manner, and a finger run around the inside frames and lower door edges revealed no rough spots. Energy-efficient LED lighting, including some very neat under-locker strip lighting, is used throughout.

Undoubtedly from Trent’s point of view, the most important area is his bedroom which contains two bunks along the nearside wall. I assume his is the top one because it has a DVD player/flatscreen TV unit fitted at the base of the bed. The lower bunk has a window but the upper one doesn’t; it has a large Fiamma exhaust fan hatch instead.

In addition to the bunk beds, the front of the van also has a centrally-located, full-height wardrobe and two cubicles along the offside. The forward one contains the Thetford cassette toilet, vanity cabinet with washbasin and a top-loading Lemair washing machine; the rear one is the shower cubicle. Both toilet and shower have fan hatches and relatively large windows for ventilation.

There’s a bit of space around the rear, 1.9x1.5m (6ft 2in x 4ft 1in) bed plus room for a bedhead of side wardrobes, bedside cabinet and overhead lockers. The innerspring mattress sits on a contoured slat bed base that lifts to get to the storage space underneath. Part of that of course is taken by the rear tunnel boot.

One of the benefits of designing your own van is that you can get the kitchen you really want. This one comes with an angled sink layout that even with the adjoining cooktop still gives plenty of benchtop area, along with a good selection of cupboard and drawer space. A microwave is fitted into the overhead lockers adjacent to the fridge, which is a Vitrifrigo 240L 12V compressor model.

Some dinettes tend to look, well, a bit ordinary but not this one. There are comfortable black leather upholstered seats for a start, and like any good contemporary caravan, a fold-out table. Above the table are two powerpoints and a TV antenna connection. It’s not quite overkill with the powerpoints: one is supplied from the 1500W inverter.

Speaking of electrics, this van has the lot for keeping the batteries up to speed: a 40A mains charger, three 130W solar panels and a 2kVA Honda generator.

I reckon the Rooney family is set for some fun travel in their Spinifex caravan. It’s certainly designed and built to travel most of the roads throughout Australia, and has the capacity to stay away from civilisation for sustained periods without having to miss out on most of the comforts of home.

Words and pics Malcolm Street, as featured in the June edition of Caravan World magazine, on sale May 12, 2010.