In our increasingly corporatised, big-business world, it’s reassuring to know there are smaller firms out there that put customer relations and service ahead of bottom-line profits. May West Caravans, based in Melbourne’s western suburbs, is one such company.

Owned and run by Peter and Sharleen May, this husband and wife team prides itself on delivering that personal touch. And it certainly looks like the May West way of doing things has found plenty of favour, because this year the company is celebrating its 20th year of operations.

"The whole business has progressed around the general growth of the caravan industry, and there have been plenty of highs and lows along the way," says Peter. 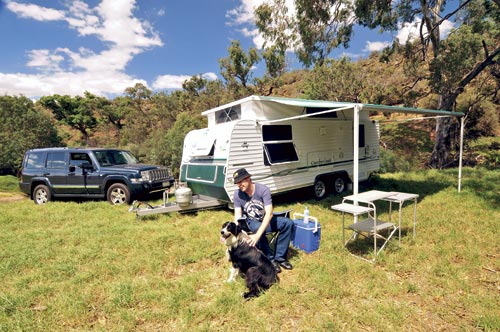 The business started in commercial caravan towing before growing to encompass caravan hire, then sales, service and repairs, before adding manufacturing to the list – first under the name Heading Off, then simply May West.

Employing seven full-time staff plus a number of casuals and sub-contractors, May West produces between eight and 10 caravans each year at its manufacturing facility at nearby Werribee.

You won’t find May West at the big caravan shows, either, as it relies on word of mouth more than large advertising campaigns. "A lot of our customers are experienced caravanners who know what they want, and many are return customers," says Peter. "I honestly don’t think there’s any such thing as a perfect caravan, it’s all about how you treat customers after you’ve sold them the van that counts."

SOMETHING FOR EVERYONE
The May West line-up comprises six basic ranges, all named after Victorian rivers: there’s the Kiewa, the Snowy, the Howqua, the Tambo, the Delatite and the Cumberland. Collectively they cover just about every caravan option you can think of, but there’s still wide scope for customisation.

"As long as what you want fits in the size of the model and doesn’t interfere with its weight ratio, we can do it," says Peter.

This year’s models bear "May West 20th Anniversary" decals, and Peter says that anyone who purchases one will be on the receiving end of some special deals. "We’ll throw in a couple of extras when we sit down and discuss each customer’s requirements," he says.

Our review van was a Cumberland– in this instance a tandem-axle family pop-top, with a front queen-size bed and a rear dinette that converts to a twin-bunk setup.

Inside and out, the Cumberland’s design is all about tried-and-tested engineering principles, rather than being all frills and no substance.

A traditional aluminium-clad exterior is wrapped around a meranti timber frame, which in turn rests upon a 4in DuraGal chassis. The 15in alloy wheels with 10in electric brakes ride on leaf spring roller-rocker suspension, but you can upgrade the latter if desired.

Down the nearside you’ll find a drop-down picnic table, a powerpoint, a light, two speakers, a Bargman illuminated grab handle and a Dometic A&amp;E 8500 awning.

The silver and green graphics are simple and smart, and they’re accentuated by the green pebble guard, some alloy checkerplate and moulded green trim over the wheels.

SPACIOUS INTERIOR
Step through the rear door and you’re immediately hit by a sense of interior space, complemented by light timber tones and plenty of natural light from the zip-out sections of the Tebbs’ pop-top canvas, plus a few sizeable windows.

The rear-offside corner dinette, with its darker fabrics, is a nice contrast, and there’s a heap of room here– certainly enough for mum, dad, a couple of kids and a couple of guests. A wooden tri-fold top bunk can be set up in seconds, and this is a solid unit– it’s not light to lift out but it should certainly prove durable. The rear dinette backrest doubles as the top bunk’s mattress.

The mid kitchen has everything you need, all within easy reach. There’s a Swift four-burner cooktop, grill and oven, with an LG microwave beneath the generous, square, deep sink. There’s not a whole lot of dedicated bench space here, but you could always call upon the large dinette table.

The polyply cabinetry has timber edging (there are timber pelmets over the curtains and blinds, too), and while the cupboard and overhead locker doors are fitted with simple ‘screw and plastic catch’ locking mechanisms, they’re dependable and devoid of the sticking problems of many pushbutton systems. The drawers also roll on metal runners, not flimsy plastic ones.

Opposite the sink is the 120L Thetford three-way AES fridge/freezer, while above the fridge is plenty of space to mount a TV, where it can easily be viewed from either the bed or the dinette.

The queen-size bed with innerspring mattress lifts up to reveal a stack of storage space. There are sizeable hanging wardrobes either side of the bed, too (you can also store lots of stuff under that massive dinette).

There’s room to move around each side of the bed with ease– a big plus– but I would have liked a powerpoint or two by the bedhead. Again, it’s simply a matter of requesting this at the design stage.

Other items of note include a Heron Q split-cycle air-conditioner over the bed head, a JVC entertainment system by the door, and neat hinged lids on the bedhead for those little items like watches, books, reading glasses, etc.

THE BOTTOM LINE
As shown, this Cumberland comes in at under $45,000 (tow-away, ex-Melbourne), and that seems to me to be a very fair price for what’s on offer, even without a shower or toilet.

It is solidly built and not overly heavy, though there are lighter pop-tops on the market, if the tow capacity of your vehicle is of concern.

When you buy a May West caravan you also buy the confidence that comes a company that has stood the test of time.