WHEN YOU SEE as many caravans as we do, it takes something special to get your attention - and the 2450 Ritz did just that. With its distinctive, wind-cheating shape and unusual construction, it's a stand out in an industry where many stick to a proven formula.
Grandcruiser has been around for slightly more than seven years. The larger models are manufactured in Tamworth, NSW, but its smaller sports tourer rigs are assembled in Cessnock, NSW, more or less in the heart of the Hunter Valley. The 7.32m (24ft) Ritz you see here is the largest model in the range.
According to director Anthony Huxley, since entering the market Grandruiser has worked hard to improve design detail, particularly concerning the little things that make so much difference to life in a caravan. For example, the windows are fitted with fly and privacy screens, and the U-shaped lounge really does have room for five or six average-sized adults.
But first thing's first. The 2450 is built using sandwich panel construction, with high-density foam between two layers of fibreglass. It is reinforced at the joints with Sikalfex, a tough polyurethane adhesive sealant.
This construction technique makes Grandcruiser vans slightly heavier than their conventional counterparts. But this, Anthony says, is more than offset by the additional strength and insulation qualities this type of construction confers.
Grandcruiser vans look especially distinctive. Instead of the slab-faced front found on a more conventional caravan, there is an aerodynamically-designed nose that houses a large boot.
Given that the average truck expends about 30 per cent of its horsepower overcoming wind resistance, the benefit of this wind-cheating design is immediately obvious: reduced fuel consumption, and possibly less wear and tear on the tow vehicle.
Aerodynamics aside, the 2450 looks much like any similar van at the upper end of the market, but stepping through the triple-lock security door reveals another surprise: internal appointments are not what you'd expect.
Sensibly, the company has stayed with familiar appliances to facilitate easy servicing and repair, but the interior lacks the traditional 'velvety' look popular with many Australian manufacturers.
Anthony Huxley describes Grandcruiser interior as "contemporary European".
"More Audi than Chrysler," was how he put it. I can see why.
It's certainly contemporary, but without the frigid sterility that often characterises the less-is-more school of interior design. There are lots of smooth, flush surfaces and subtle, rather than flowery colours, but it isn't at all cold. If anything, the interior is suitably understated. And all the more attractive for it.

NICE AND SPACIOUS
The front U-shaped lounge has room for five or six, a nice change from the squishy space you get in some vans. The table and its support can be removed, and there's loads of storage space around the edge of the lounge itself.
A powerpoint is set into the base of one of the seats, and opposite that is a neat slot for the fire extinguisher.
The east-west bed is positioned between the kitchen and the bathroom. Grandcruiser has taken care of the key disadvantage of this orientation - walking around the bed - by eliminating the traditional problem of wheel arches. There aren't any.
The bedroom has a large five-lock security window on the nearside, two bedside tables (with a powerpoint above each), and drawers and hanging robes aplenty. Another feature that took me by surprise was a small QNN electronic safe concealed in one of the cupboards.
The Grandcruiser's bathroom seemed smaller than in the 6.4m (21ft) Paramount Classic I recently tested, but remains well-appointed.
The shower is large enough for most blokes, the shower head is adjustable and the bathroom has enough storage for all the stuff we like to put in bathroom cupboards. There's also a large mirror and a nice vanity with a neat basin and flick mixer tap.
Lighting throughout is LED, and all are installed precisely where you need them. The Ritz is also wired for solar. Given all the hoo-ha about solar, and our government's resistance to its widespread implementation, you'd think it would be a popular option on a caravan. But Anthony says just 10 per cent of his customers actually show much interest in it.
A Dometic roof-mounted air-conditioner was fitted in our test van, but future units will have the Aircommander Ibis. In any case, this is supplemented by three hatches, one at the lounge and bed, and another in the bathroom.
The TV, with a Wineguard antenna, sits on an adjustable swivel mount near the door so it can be watched from inside or out.
Award-winning meals are prepared with the familiar gas-electric cooker/grill, in this case a Smev four-burner (three-gas, one-electric), and a small rangehood. The fridge is a large 180L Dometic two-door.
The kitchen also has a Convection microwave, while controls for the CD/DVD player are set into the top of a vertical cupboard near the door.

ON THE OUTSIDE
First stop on the external storage tour is a through tunnel boot at the front nearside - not available on all models - and next to that a bayonet gas connection. Further along is a fold-out table with a lockable hatch, two external all-weather speakers, awning lights and access to the toilet cassette.
At the rear, a large hatch gives service access to tail-light wiring, etc. Along the offside is an outdoor shower, 240V plug, mains water connector, the other end of the tunnel boot and a lockable filler point for the twin 82L water tanks.
The van is mounted on a hot-dipped galvanised steel chassis, and sits on leaf spring suspension with what Grandcruiser describes as "offroad-type clearance". The undercarriage kit includes one-piece axles, a breakaway unit, drop-down corner stabilisers and very spiffy-looking Speedy 15in alloy wheels. 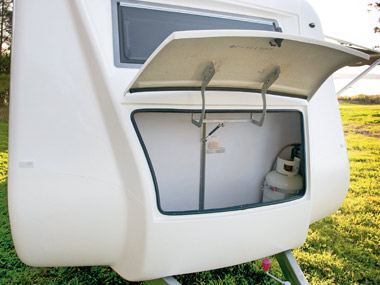 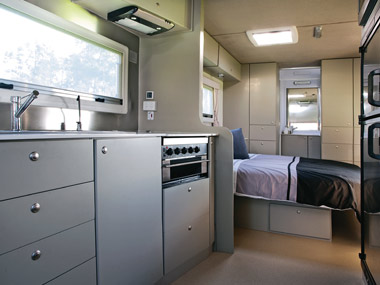 THE BOTTOM LINE
Anthony Huxley says the travellers most likely to be interested in a van of this type are the legendary grey nomads and baby boomers, although younger people often take an interest. At $75,000 this is not a budget buy, but nor is it supposed to be.
It is slightly heavier than conventional vans of comparable size, but can still be towed with your average, non-turbo 4WD.
The most attractive features of this model are its stylish interior and nice fit and finish. It would be good if there was a little more space in the bathroom, but we could live with that given the other classy features this van has to offer.