There’s a good selection of family caravans available in the RV marketplace at the moment. In many cases, those vans have evolved into a standard layout that has a front island bed and a rear area with both bunk beds (either triple or double) and a full bathroom. That results in a van length of about 6.5m (21ft 6in).

However, it’s possible to get a shorter and lighter family caravan by introducing a bit of compromise and by rearranging the furniture. That’s exactly what Ocean Breeze Caravans has done with its 18ft 6in bunk van model.

Ocean Breeze, a regional Melbourne based manufacturer, builds a small range of caravans that has of late been taken on by Sydney dealer Parravans Caravan World — and the team was keen to show me the small bunk van model as a good example of the manufacturer’s range. 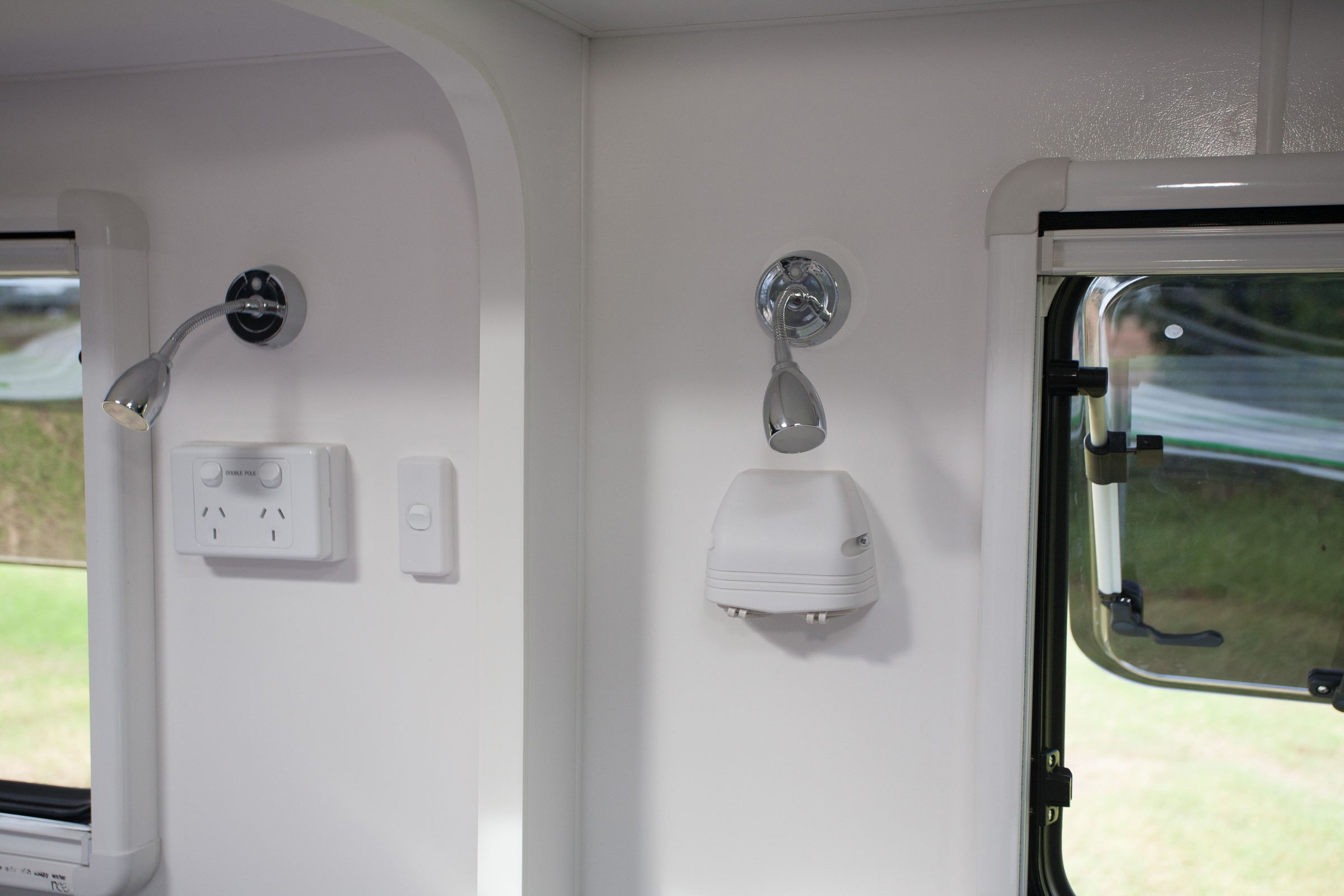 Only a mid-sized vehicle is needed to tow this caravan

Parravans is located in the Windsor area, north-west of Sydney. Back in March it was one of the areas badly affected by flooding and on this little trip I was wondering just how some of my favourite photographic locations had fared. Not well is the short answer, with the flood damage still very evident. Two of my prospective locations were still closed and although a third by the Hawkesbury River was okay, accessibility on a still very muddy steep track was another matter. I mentioned all that because I did a fair bit of driving behind my Nissan Navara ute and for the entire time, the Ocean Breeze was an easy tow. With a tare mass of 2020kg and an ATM of 2680kg, the van is a good match for something like the Navara. It’s not working on its limits and has plenty of capacity in both the power and weight departments.

A question that may arise is how you get a family of five into a van that is just 5.69m (18ft 8in) long, especially in a layout that includes a bathroom area. The answer is to be a bit creative with the layout and introduce a compromise or two. A transverse bed sits across the front of the caravan and the mid-area is taken up by the kitchen and dinette. In the latter case, it’s not the more normal cafe style or L shape but rather a sideways facing lounge against the wall. A slightly different style than usual has been adopted for the rear bunk and bathroom area, with a set of triple bunks across the rear wall and a split bathroom in front of that.

The colour scheme takes a very monochromatic approach. Everything is either black (upholstery, fridge, magazine pouches & bunk beds) or white (walls, cabinetry and ceiling) with a touch of grey around the kitchen area. It certainly creates a very bright effect, especially when all the lights are turned on and there are certainly plenty of those — both LED ceiling fittings and reading lights. The reading lights, all of which include a USB outlet, are plentiful. A handy item is the master switch almost at floor level by the entry door. Easy to reach when stepping in or out.

Tucked in behind the bathroom area, the bunks offer a decent amount of privacy for the occupants. For younger family members, although there are no curtains, there’s a cubby house effect, which will be an attraction at bedtime! Measuring 1.88m x 0.64m (6ft 2in x 2ft 1in), the two upper bunks come with a window, reading light, power point, magazine pouch, and a small cupboard at the base of the bed. The lower bunk misses out on the cupboard and although it gets a window, it can't really be opened because of the adjacent spare wheel mounting. An offset spare wheel might be the answer.

The main bed area is separate from the bunks

A split bathroom works well in this layout, having the toilet cubicle on the offside and the shower cubicle opposite, although the proximity of bed and toilet might be disconcerting for some. Built into the toilet cubicle are a bench-style cassette toilet and a vanity cabinet with cupboards below, wash basin and mirror in the middle, and overhead lockers above. It’s compact but usable. Like the toilet, the shower cubicle has a fan hatch in the ceiling, as well as the expected height adjustable, flexible hose shower. The cubicle is large enough to turn around in without banging elbows.

There doesn’t seem to be any correlation between the number of beds in a caravan and the size of the kitchen for catering purposes. That’s certainly the case here — the kitchen bench is about the same size as many I have seen in two berth caravans. This isn't really surprising in a van this length, given what else is fitted in. That said, it scores quite well in the general storage department (something essential in a family caravan) because there are plenty of overhead lockers, drawers, and cupboard space. There’s even a small wire basket pantry. Fitted into the kitchen bench top is a stainless-steel sink and a Swift four burner cooktop with grill. Butting up against the toilet cubicle on the opposite side of the walkway is a well-sized (for a family) Thetford 169 litre fridge with an NCE microwave oven above.

Even more storage is found above the kitchen

The sideways facing seat is a little different to usual but in terms of seating practicality, it’s not a bad idea. Many a dinette in bunk vans really doesn’t really match the number of beds, but this comes close and an extra folding seat on the other side of the table is going to be a good idea. The table is relatively long and single-pole mounted which does mean swivelling the table if anyone wants to get in and out. Reading lights are fitted either end of the seat and there’s a wall mounted power point at one end and a 12V/USB hub at the other.

East-west beds are often problematic for at least one occupant because of the awkwardness of clambering in and out of bed. That’s made slightly easier here because the bed length of 1.85m (6ft 1in) allows a bit of walkway access at the base of the bed, not fully though because there’s a standard double bed wardrobe and bedside cabinet in the corner. It's a handy bit of clothing storage, along with the overhead lockers that sit above the bed itself.

Even though this is an onroad caravan, the Road King DuraGal chassis using Blue Scope Steel is certainly built quite substantially with 150mm x 50mm (6in x 2in) RHS used for both the chassis and drawbar rails. There’s a fair bit of steel in the chassis and I suspect it makes a fair contribution to the tare mass. Riding on 16in alloy wheels, the van is fitted with Dexter Torflex suspension — the torsion arm type in which the rubber suspension cords are enclosed within the main structural members. Two 95L freshwater tanks are mounted forward of the axle, leaving space for the grey water tank at the rear — an interesting addition to an onroad caravan. The battery box is mounted on the forward offside chassis rail. All cabling and pipe work is mostly well strapped up and neatly done, although I did think the water tank sender unit cabling could be a little better protected. Mounted on the drawbar along with the usual items — ball coupling, handbrake, jockey wheel, and gas cylinders — is a small checkerplate storage box. It matches neatly with black alloy around the rest of the van.

Like the chassis, a traditional approach is taken with the bodywork. It has a Meranti timber frame with aluminium cladding for the side walls but aluminium composite for the front, rear, and roof line. External bin storage is better than what's usually found on vans this size. In addition to the front tunnel storage, there’s a small vertical bin at the offside rear and a third hatch along the offside gives access to the underbed area. For the body structure, Ocean Breeze supply a 12-month warranty.

Fitted with a 105Ah AGM battery and a 170W solar panel, together with the water tank capacity, the van is well equipped for a several-night stay away from a caravan park. The limiter is going to be the cassette toilet. Knowing where dump points are is certainly recommended when using this van.

I reckon the most attractive feature of this van is the Tardis-like effort into getting a family layout into a van this length. Sure, it’s a compact area inside, but by having the main bed area up front and the bunks down the back, there’s a bit of separation for everyone. Being a single-axle van that isn’t overly heavy, many a vehicle used for family travel can also be used as a tow vehicle. All up, it’s a great little package.