Malcolm Street — 5 November 2020
Is it possible to make offroad travel affordable for a family? Jayco’s All Terrain bunk van might be able to answer that question.

Introduced last year, the offroad All Terrain was originally an extension of the Journey range. Now, though, it is part of Jayco’s Adventure series, which also includes the diminutive J-Pod, JTrak tent trailer, CrossTrak Hybrid and Toy Haulers. All are designed with rough road/offroad use in mind, but undoubtedly the All Terrain — available as both a pop-top and a full caravan — offers the most in both comfort level and ease of set up.

To get a look at an All Terrain caravan, we borrowed one from Jayco Sydney — to be specific we borrowed the 19.61-3.AT model. Don’t you just love those numbers? Translated, it means it has an external length of 19.61ft and is the third model in the All Terrain lineup. 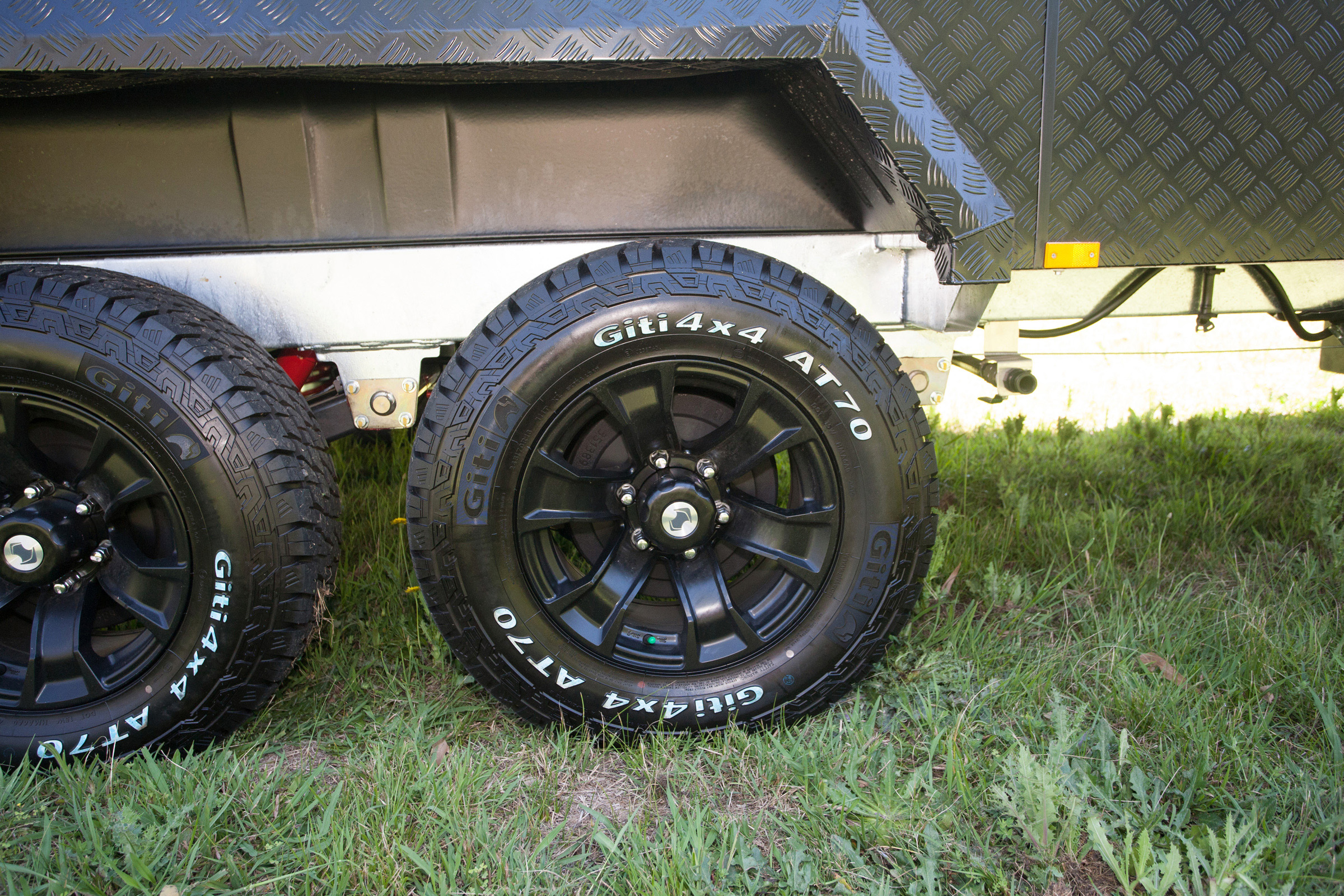 What the numbers don’t tell you is that it is a family van, complete with bunk beds, which is probably the most important feature of this model.

For the All Terrain van build, Jayco hasn’t exactly gone boldly where no one has gone before, but they have made effective use of some in-house developments. The hot dipped galvanized Endurance chassis, with its 150mm x 50mm (6in x 4in) rails and drawbar uses Pressed Steel C-Section (PSC) longitudinal members to keep the strength up and the weight down.

Being an offroad van, it has independent suspension — Jayco’s JTECH 2.0 system — that comes with trailing arms, coil springs and heavy-duty shock absorbers. According to the Jayco design team, the stub axles, bearings and brakes are all suitable for using the Lippert Sway Command system.

Above the chassis, the All Terrain has an aluminium frame. It’s part of Jayco’s vacuum bonded multi-layer wall construction, which consists of external fibreglass/3mm plywood/aluminium framing/insulation and internal 3mm ply. And no offroad van would be complete without the de rigueur waistline of protective black alloy checkerplate and storage box on the front drawbar.

On that subject, the external storage is quite generous. In addition to the front box, which has doors on either side and a top tray, there’s also a front tunnel compartment with access from both sides and a rear nearside compartment as well. Adding to the weight on the drawbar are two 9kg gas cylinders and two jerry can holders — caveat, be a little careful with loading and tow ball mass.

In a van with an external length of 6.05m (19ft 7.5in), an island bed and bunk beds really isn’t going to work, so what Jayco has done in this forward door entry layout is turned the double bed sideways across the front. This allows for an offside dinette and facing kitchen bench, leaving the rear area for two bunks and a bathroom. Like the body framework, the cabinetry framing is also made from aluminium.

Although a fairly light colour scheme has been employed, the front area was somewhat dull even in broad daylight, in part due to only having an offside window in the bedroom area, but also because of the lack of a roof hatch. There’s a good reason for that, though. Where a roof hatch might normally go, there’s a Dometic Dust Reduction System. Designed principally to keep dust out, it also has the same effect on light.

Up front, the transverse bed measures 2.03m x 1.5m (6ft 8in x 4ft 11in). The pillows are located on the offside because there’s bedhead shelf under the window, as well as two cubbies behind the pillows. Both bed occupants get touch button light switches and reading lights, but a shared power point. Overhead lockers are fitted all around above the bed.

Under the nearside lockers are two Sirocco 12V fans and while the location is good for those in the bed, it’s less so when the bed is lifted. The one nearest the door would benefit from a slight relocation to avoid damage when the bed is lifted. Under the bed the storage space is less than might be expected, with the water heater, batteries and external entertainment already taking up space.

The All Terrain kitchen bench looks somewhat familiar in its layout. Fitted into the bench top are the essentials of a four-burner cooktop and grill alongside a stainless-steel sink and drainer. It fairly short, but is fitted with four drawers, a single cupboard and two overhead lockers. An interesting addition to the overhead locker space is a TV mounting point. While it does take up storage space, it’s a good viewing point for both the dinette and the front bed — junior members in the rear bunks won’t be so lucky.

In addition to the cupboard under the bench, there’s a double cupboard squeezed in between the cooktop and the rear bedroom wall. Fitted with multiple shelves, it could be a kitchen pantry, clothing cupboard, or both. Against the rear bedroom wall on the opposite side is the fridge cabinet, with a 171L three-way Thetford fridge below and a Sphere microwave oven above.

Jayco has a bathroom layout that’s a little different — mostly, I suspect, to fit in the top loading washing machine. A shower cubicle, one large enough to turn around in without banging elbows, sits in the rear offside corner. In front of that sits a Thetford cassette toilet, leaving enough space on the forward wall for a vanity basin and the aforementioned washing machine. An overhead locker and small cupboard provide the necessary storage space, and there’s a small mirror above the wash basin.

Ventilation is provided by a fan hatch above the shower and a surprisingly large window. It’s not frosted European style, so use of the window blind is recommended, at least to three quarter level, when the bathroom is in use!

Measuring 1.84m x 0.7m (6ft x 2ft 4in), the bunk beds are well sized. Both come with a window, downlight, privacy curtain and power sockets, both mains 240V and 12V. The aluminium ladder for the top bunk is a cut above the usual and has decent steps on it. Under the lower bunk is a storage area which is also accessible from the outside. There’s a cable run along the lower corner of the storage area, which I presume is low voltage, but given what might be stashed in the compartment from the outside, a bit of protective ducting or conduit might be good.

Between the bunks and the bathroom, the space is occupied by cupboards and drawers. There’s plenty of shelf space, which isn’t a bad idea in a family van, and one of the reasons the washing machine, often located in this area, is in the bathroom instead.

For the 12V power system, two 100Ah AGM batteries are fitted as supplied. An option on the All Terrain is for lithium LiFePO4 batteries, but next year that will be a standard feature. Two 160W solar panels keep the batteries charged, and it’s all managed by a BMPRO J35 battery management system. There is a combination 240V power point/USB charger hub but it’s under the table and awkward to get at. It also won’t work without mains power. However, for the modern travellers, there is an inbuilt Wi-Fi system.

Given a tare of just under 2500kg and an ATM of just under 3000kg, the All Terrain is good for a range of tow vehicles, including dual cab utes, which won’t be working at the extremes of the respective tow mass limits. Certainly, the Jeep Grand Cherokee I was using coped with the All Terrain without any problems, and it tracked along in a well-behaved manner. A feature I appreciated was the optional reversing camera fitted to the van.

From an offroad travel point of view, I reckon the length of the van is ideal. It’s not too long for undulating road travel yet is long enough to fit a family in without too many layout compromises.

Paraphrasing the Jayco marketing material slightly, the All Terrain caravan is an adventure waiting to happen, in this particular case for a family looking for some fun travel times together.

Dometic’s Dust Reduction System (DRS) is relatively new. It’s actually been around since the beginning of the year but opportunities for product testing have been somewhat limited by events well out of our control. The DRS is roof mounted and designed to filter the air whilst the van is in motion. It works on the basis of minimising dust entry by pressurizing the van interior. There are no moving mechanical parts, nor any power supply needed.

Washing Machine $55 /washing machine will be standard in 2021