Ged Bulmer — 2 April 2020
Aussies are twigging to something the Yanks have known for ages — for towing, bigger is usually better

One of the catchier motor advertising campaigns in recent times features a RAM 1500 V8 towing a boat and pulling up alongside a thinly disguised Toyota HiLux. The voiceover urges the viewer to “imagine yourself behind the wheel of a real truck” as the envious HiLux driver furtively glances at the towering Yank Tank, before the RAM accelerates effortlessly away, boat in tow, leaving the Toyota in the dust.

It’s a simple but effective bit of communication that suggests it’s time for Aussies to rethink their attachment to the predominantly Japanese-designed, Thai-built dual cabs and take a good, hard look at some American iron.

It seems to be working, with Melbourne-based Ram Trucks Australia (RTA) claiming to have moved some 3300 V8 petrol and V6 diesel RAMs during 2019. Car manufacturer Fiat Chrysler Automobiles doesn’t make the RAM for right-hand drive markets, so the trucks arrive here in left-hand drive from Sterling Heights, Michigan, before being reengineered to right-hand drive specification. 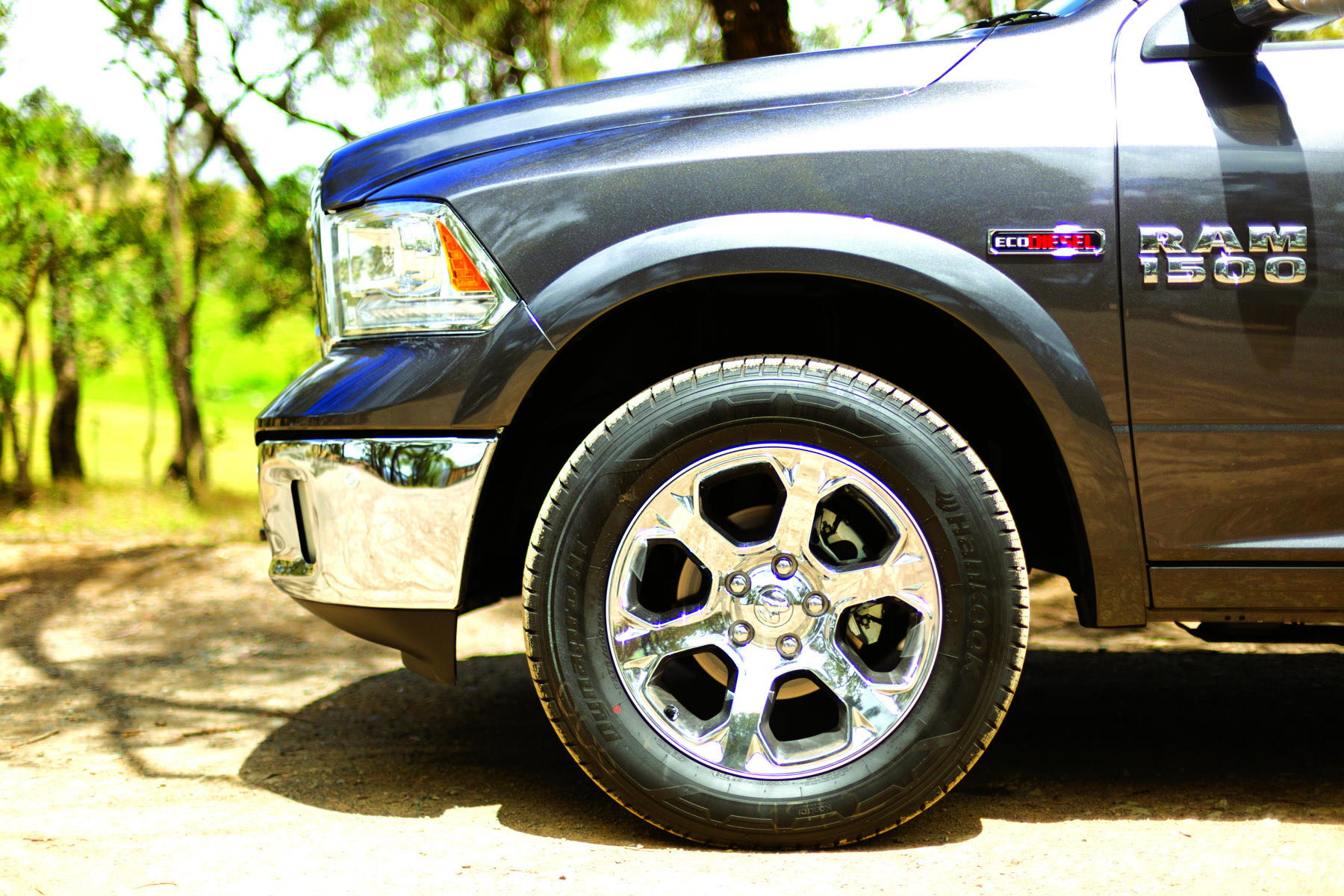 RTA claims to be “the only factory authorized remanufacturer of right-hand drive RAM trucks in the world” and is no backyard affair, boasting 150 staff and a 13,000sqm manufacturing facility in south-east Melbourne where up to 16 trucks can be built per day. In December the company celebrated its 5000th locally built RAM, so clearly business is booming.

The conversion, or ‘reengineering’ as RTA prefers to call it, involves separating the vehicle body and chassis, fitting a RHD specific steering system, installing a new Australian designed, developed and manufactured dashboard, plus a RHD-specific heating and ventilation system, before the body and chassis are re-married. In practice it’s well executed and there are no obvious clues to suggest the conversion is anything but a factory effort.

To date, most of the RAM 1500s delivered have been the less expensive Hemi V8-powered versions. The company forecast that the addition of this turbodiesel V6 variant in mid-2019 will account for only around 10 per cent of sales, presumably to tow-oriented owners. Both the petrol V8 and diesel V6 have identical 3500kg maximum braked tow ratings, although the V8 can be had with two axles ratios, the lower of which is rated to tow 4500kg. Other than this there are virtually no differences in specification levels between the 291kW/556Nm petrol V8 and this 179kW/569Nm turbodiesel V6 version, with both only available in top-spec Laramie trim.

Aside from its towing capacity and grunt, which we’ll get to later, an undeniable part of the RAM’s appeal is its in-your-face American styling. While it’s sometimes hard to tell if your mate is driving a Navara, Triton or D-Max, there’s no mistaking this baby with its blunt and heavily chromed front end and over-sized R-A-M lettering emblazoned across grille and tailgate. It also stands half a head taller than a ‘regular’ dual cab and pretty much everything from its door handles to its wheelbase, tray capacity, payload and of course its towing capacity are super-sized. You step up into the cabin via sturdy (optional) side steps to discover a spacious and highly functional interior that’s clearly been designed with work in mind. There are loads of handy storage spaces, map pockets, large cupholders, and a vast two-stage center console containing multiple USB ports and specific places to store pens, notepads and sunglasses. A two-stage glovebox, with separate top and bottom sections provides further stowage.

Despite its workmanlike nature, the overall quality of fit, finish and materials are impressively high. There’s stitched leather on the seats, steering wheel and dash top, plus splashes of faux-chrome and timber embellishment on the dash and doors. The multi-function steering wheel adjusts, and the wheel boss houses an assortment of volume and cruise control buttons, plus unusual gear selector switches for manual shift control of the auto gearbox. Otherwise gear selection is looked after by a rotary dial on the dash, with the usual P-R-N-D selections above a small cluster of switches to engage the various drive modes — 2WD, 4WD Auto, 4WD Lock and 4WD Low.

The driving position is high, the heated and cooled electric bucket seats comfortably plush yet supportive, with good visibility down the road ahead and large wing mirrors to see what’s happening behind. A 7-inch multi-view instrument display ahead of the driver is clear and well laid-out, with conventional analogue speedo and tacho, flanked by additional temperature, fuel, and turbo boost gauges. A small multi-function digital screen between the main gauges provides additional information on everything from vehicle speed to direction of travel, transmission temperature, fuel consumption, and more. A clear and easy to navigate 8.4-inch touch screen in the centre of the dash centre offers nav and entertainment functions, including standard Apple CarPlay, while a decent quality Alpine sound system pumps tunes through a nine-speaker sound system. A foot-operated manual park brake is located under the dash, close to the driver’s right leg.

Rear seat passengers are well looked after, with seat heaters and air vents plus a 12V charger for accessories, along with loads of legroom and a seat that’s comfortably wide enough to accommodate three adults. The seats feature a 60/40 split-fold design, with the backrest remaining in place and the seat base folding vertically, enabling the space below to be used for load carrying. A neat feature is the carpeted bi-fold panel that extends out from beneath the seat sections to create a flat two-thirds-width load space on the floor, with additional storage beneath. Tiny LED lights built into the seat base that illuminate when you fold the seats are an unexpected ‘surprise-and-delight’ feature.

An electric sliding rear window provides access from the cabin into the tray, which is coated in a durable spray-on finish, with four sturdy tie-down hooks. Lighting on either side of the stop lights provides tray illumination at night, while a plastic protector lip runs around the edges of the tray and lockable tailgate to prevent damage.

GET OUT ON THE HIGHWAY

Out on the road the RAM 1500 feels like the big, barrel-chested beast of a thing its stature suggests. At 2715kg it’s roughly 500kg heavier than something like a HiLux dual cab, so acceleration off the mark isn’t electric, but once up and rolling it pulls strongly. Put the foot down at 80km/h, and the big ute pins back its ears and gallops assertively to the speed limit and beyond. The 3.0L turbodiesel V6 summons maximum torque from just 2000rpm, the eight-speed automatic gearbox shuffling quickly and easily through the cogs to top gear and holding it assertively. The engine-transmission combo is tuned to be lazy and hence economical, happy to lug away at just under 2000rpm for the most part but still responds reasonably briskly to an insistent right foot.

Our tow rig for this adventure was the Coromal Pioneer Evolution XC 632, supplied by the friendly folk at Apollo Caravan and RV Sales in Somerton Victoria. The crew there couldn’t do enough to help and after fitting a set of tow mirrors and an AL-KO Click-Lock pin to the Ram's tow tongue we were ready to hitch up. Here the standard fitment reversing camera and screen made things relatively easy and, once out on the road with the 2645kg (Tare)/3395 (ATM) test van in tow, the RAM felt right in its element.

Our route took us north out of Somerton in Melbourne’s northern suburbs and onto the Hume Highway where we cruised easily between 105 and the posted 110km/h limit, the rig maintaining momentum in undulating terrain impressively well, its substantial heft stoically resisting side-wind buffeting. In these conditions the auto hangs onto gears longer, upshifting between 1000 and 1200rpm higher than when unladen, or at about 3000rpm on a light to moderate throttle. The auto prefers to stay in the higher gears and utilize the engine’s strong mid-range torque, but hills and inclines will see it drop a cog or two, boosting revs to a brawnier 4000rpm until the obstacle is dispatched.

Turning off the Hume at Broadford we followed a loop that took us north-east to Yea, and eventually back to the south-west and home to Somerton. The 200km towing loop took in a decent variety of country roads, including steep descents at Murchison Gap and on the Whittlesea-Yea road that tested braking power and stability in bends, as well as a solid climb into Kinglake off the Melba Highway which tested the engine’s brawn.

While maintaining 110km/h at 2250rpm on the Hume was never a problem, on subsequent secondary roads the combination felt happier between 80 and 90km/h, mainly due to the tightness of the roads. On these bumpier roads, the RAM remained impressively stable, its steering, while noticeably heavier than you’ll find in most Japanese utes, remaining positively weighted and consistent in terms of its response with the van in tow.

On the bumpiest sections we noticed a modest amount of fore-aft pitch, but this never had a significant detrimental effect on the Ram’s handling. With double A-Arms and coil spring front, and live axle coil spring rear suspension the RAM rides with a pleasingly soft and long-travel gait. The extra suspension provides pleasing amounts of extra bump absorption on rougher sections but is not so much that it adversely impacts handling. Driven sensibly and within its limits, the RAM is entirely comfortable and predictable in its ride and handling with an ability to hold its cornering line impressively well without being bullied about by the trailer in bends.

Braking performance was also never seriously questioned, the pedal remaining consistently strong and accurate in combination with the standard fitment electric trailer brakes. Unusually, our unladen 90km of urban driving average of 11L/100km, better than the official 11.9L/100km claim, while our 223km tow route returned an average of 16.6L/100km. With its 98L tank this means the RAM should be good for about 550km when towing something like the Coromal.

While the RAM 1500’s $110k price tag may put it out of reach for many buyers, its 3500kg towing capacity will be a major carrot for others. As tempting as it might be to think of the RAM as being all about the engine, drive train and towing ability, it’s in fact a remarkably well thought out work truck, one that’s comfortably trimmed and well equipped, so as to make for a thoroughly practical yet luxuriously comfortable daily drive. It’s also an excellent tow platform and a vehicle that owners will surely appreciate for its effortless ability to handle sizeable towing loads.

While the RAM may never be a volume selling model in this country, we think it's a good thing that Aussie motorists now have the option of purchasing a full-size American pickup that’s been converted and reengineered to the high standards RTA is clearly operating at.