John Ford — 18 September 2019
For all reasons and seasons

Often the search for the right recreational vehicle can be daunting, especially if you like the idea of boating when travelling. Choices might include a small dingy or folding boat on the roof of a tow vehicle or a trailer boat behind a motorhome. And while these options might sound attractive, there are inherent problems that can make either choice too tricky.

Wrangling a boat off the roof can be quite physical and, the size of roof toppers restricts them to the flat water of smaller estuaries. So too, towing a trailer boat with a motorhome isn't everyone's cup of tea. But what if you could merely back your caravan up to the boat ramp and sail off into the sunset? I’m not suggesting you try it with your present van — it probably won’t float, but the Caraboat combines all the best of boating and vanning in one tidy package. 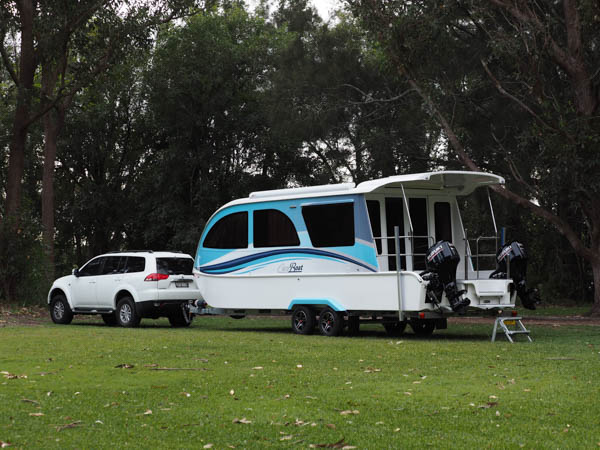 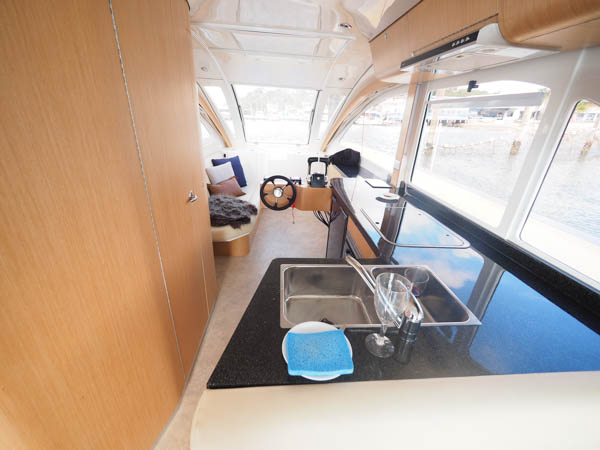 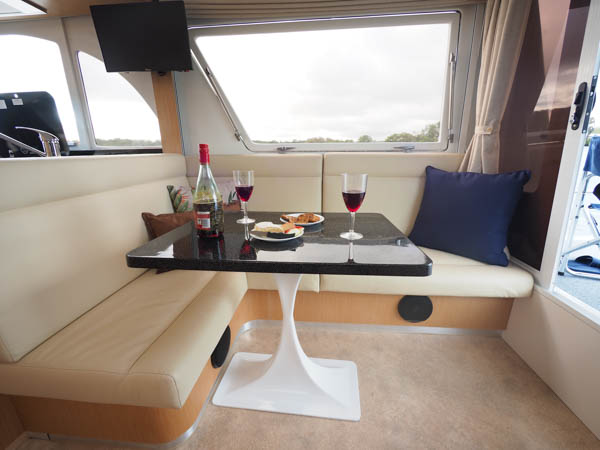 Built on the shores of Port Stephens on the mid-north coast of NSW for the last four years, the latest version extends the rear platform for a bigger outdoor relaxing space and adds a lifting rear awning for access to the roof. The company plans to break into the American RV market with this new model, and the changes reflect research that confirms the Yanks like the idea of getting up on the roof to sunbake. Luckily we have sandy beaches for that pursuit, leaving the top as a handy area for storing a couple of kayaks or paddleboards for a spot of exercise if that's how you roll.

Caraboat has had success with its original shorter version, and it will remain in production, but the new model should have broader appeal. Even though the smaller boat can be opened up to let in plenty of air and light, the rear platform didn't give the feeling of wide-open space of the new 1.2m rear deck. Upgrading the engines to a pair of 50hp outboards also gives extended cruising capability and some better giddy-up for a quicker trip home if the weather turns bad.

There’s also the added benefit of the lifting aft awning that will funnel a cooling breeze to the deck when head to wind at anchor. For the uninitiated. that’s good — and there’s a whole new world of nautical terms to master once you take the helm.

This floating caravan or trailerable houseboat concept was developed by company owners Rob Shenn and Andrew Kiernan, who have been building seagoing power and sailing catamarans for many years. As the big boat industry wound down after the GFC, they saw an opportunity for the versatile new concept and began production from their factory complex in Lemon Tree Passage. As part of the development process, they needed to deal with boating and towing regulations as well as building a product that was safe both on the road and on water.

Naturally enough, unlike a conventional caravan, the build process involves separate construction for the trailer and the caravan-boat body, meaning each component has to maintain strength and rigidity on its own. In most caravans, the body and underpinnings support each other.

Components of the trailer frame are built locally in 3m sections that are then hot-dipped galvanised and bolted together at the Caraboat factory with tandem leaf spring suspension. Brakes are waterproof electric over hydraulic discs with an in-built breakaway system. This construction method is efficient and robust and allows for easy transport and reassembly for export.

and raised guide arms at the rear to help guide the skipper when driving back on to the trailer.

With a solid 9mm fibreglass bottom, the boat is well protected and can be driven on to beaches without damage. Hull sides are 6mm solid glass, while the cabin is formed from lightweight composite Plascore panels — 20mm walls and very sturdy 25mm roof and floor.

Large windows include side openings at the rear and drop-down style at the helm, while the front opens right out for access or for a full flow of air.

The rear sliding glass door creates a great indoor-outdoor interaction and handy flyscreens and internal blockouts, or roman blinds, are built into all the openings.

When in caravan mode there’s a removable plastic step for access to the built-in boarding platform between the engines at the stern, which steps up to the rear platform. The outside space is more in keeping with the Caraboat’s aquatic pursuits, but I imagine the platform will also be a favourite shaded place for relaxing on land where the raised height affords better views and quick access to the fridge just inside the door.

As you would expect, there are notable differences outside compared to a caravan. Because of the need to keep the hull watertight, you won’t find the usual storage hatches scattered around a caravan’s lower levels. Instead, there is an exterior storage hatch up front for a pair of gas bottles and sundry items. Keep in mind you will be carrying sundry camping mats and other land-based items as well as fenders and anchoring equipment. Happily, large holds in the rear platform floor as well as another one inside take advantage of the hull’s depth and offer heaps of storage room.

Access to the interior on land is an easy couple of steps up and onto the rear deck, which is clad in non-skid rubberised material. When boating you would board from a dock onto the side deck where stainless steel hinged guardrails unclip or from a beach over the rear steps. I liked the idea that the folding step can be submerged as a great place to relax in the water and for re-entry after a swim.

The rear deck has room for a couple of deck chairs, and the rails are an ideal location for an outside marine BBQ. A wide opening sliding door leads to a small step down into the airy and well-lit cabin with views from every position. All openings have flyscreens and blockouts to control privacy, but an air-conditioner isn't standard as the build team think the airflow is good enough to temper the heat and, if it's hot, you should be on the water where things should be more cooling. A roof-mounted reverse cycle unit is an option.

An open layout gives a single room from stem to stern with a combination ensuite/head central to port. Internal dimensions are nearly 8m (26ft 8in) long and around 2.35m (7ft 8in) wide, so with 1.9m (6ft 4in) head height, there is an excellent feeling of space. At the back is a cream vinyl clad L- shaped lounge with swivel table to starboard with a shorter upholstered bench opposite. The table drops to convert the couch to a double for occasional guests.

At the door is 12V Nova Cool 71L fridge/freezer. It’s an option, but I think it would be essential to extend travel past an overnight stay. With twin 150 solar panels and a bank of two 120Ah house batteries, you should be able to supplement supplies with a catch of fish for a decent break.

A 30A Enerdrive solar and DC charger takes care of battery power and the engines also add to the charge when travelling.

A well-finished, timber clad module in the centre of the living space houses the ensuite and a floor-to-ceiling pantry. Although the ensuite isn't huge, it is an efficient use of space with a large window and proper ventilation. The shower drains to a 60L grey water tank, and there's a second shower at the rear deck to rinse off after a swim.

The forward half of the interior comprises the kitchen, helm (also known as the driving position), and a combination lounge/bedroom. Because the interior is both accommodation and a mode of transport, some compromises are needed which have been addressed with smart design.

The boat’s helm is set on a simple dash that folds into a cupboard to make more space when not needed.

It's a beautiful piece of engineering and is completely invisible when not in use, but very functional when driving.

The L-shaped galley runs along the starboard side, and there is a generous amount of bench space flowing right to the front.

Twin stainless steel sinks and a Dometic three-burner gas hob are set into a speckle black Corian benchtop, while below are a Dometic gas oven and a 115L Vitrifrigo fridge with a small freezer compartment.

Overhead are a set of cupboards, a Camec rangehood and a 22in television on a rotating mount.

Towards the front is another lounge along the port side where passengers could make themselves at home when underway and where panoramic windows either side gave sweeping views.

The lounge is set on rails and can be folded out to an oversize double and moved to the central position for sleeping. It can be pushed to the port side when not in use, otherwise it has to be made each night, but I'm sure you could organise some quick-fit sheets and a doona to suit the season.

Access both sides mean it’s easy to make and access, while the clear window overhead should make for a romantic star-lit evening.

All up, Tare weight is 2800kg, so it's no lightweight proposition. ATM is 3400kg, giving a payload on road of 600kg, including 180L of water — but that’s still a reasonable amount of extra food and equipment you can carry. As always, check combined vehicle capacity before you head off.

The current crop of twin cabs will tow it easily, and the Challenger tow vehicle on

our test had no trouble moving it around. The owners recently returned from a 1200km round trip to Queensland for a

show and reported it was an easy run at highway speeds.

Overall length on the trailer is 10.3m (33ft 7in) and, as can be seen in the photos, that's a fair length, especially when looking for a parking spot in town or when trying to get into confined campsites. Backing up to the ramp was simple, and once the wheel covers and tie downs were removed, launching was quick and straightforward.

At first, I thought the helm position was in the wrong place, set too far rearward for good vision. But I soon found that sight lines were excellent, and you could even get a good view of the stern when backing up.

There's no dedicated helm seat as it would take up too much room when the Caraboat is in camping mode, but the standing position is fine, and you could bring a stool for longer voyages if you felt the need.

The flat under surfaces limit the Caraboat to sheltered waters and, given the high sides, it's going to be buffeted in strong winds. Most times you will be able to find a safe nook to anchor, but a keen eye on the weather is recommended for vast waterways.

Twin engines give the boat very welcome maneuverability by playing one against the other to turn tightly and easily manoeuvre around jetties.

The upgraded 50hp Suzuki four strokes gave a top speed of 20 knots at 6000rpm and comfortable cruising at anything from 12-15 knots between 3000-3500rpm. The economy should be excellent, and you can add extra 25L fuel tanks for extended range.

Buyers might find that the Caraboat solves the question of whether you should go for a caravan or a boat by combining the best of both worlds. This latest version is much more useable and practical with its extended outside platform to take advantage of a more open position for relaxing on the water.

The concept of a trailable houseboat broadens the horizons you can explore, and there are endless protected waterways across the continent for escape.

Pricing starts at $148,000 or $156,000 as tested with an engine upgrade, twin batteries and solar panels, the rear freezer and outside awning.