It’s a sign of the times as to just how important dual cab utes have become to many car makers, that upgrades which once took years to appear are now coming thick and fast.

In the case of Nissan’s workhorse Navara, it seems like only yesterday the MY17 model was released with upgrades that included improved suspension damping. Then, early last year Nissan followed up with a raft of MY18 model upgrades, including further changes to the suspension.

Unlike pretty much all of its rivals, Nissan is differentiated in the top-tier of its dual cab 4X4 ute variants by the use of coil springs on the rear suspension, instead of the more common leafs fitted by rivals. Nissan’s commitment to this undeniably more comfortable and sophisticated suspension configuration has, however, required it to go back to the drawing board on a number of occasions in a bid to get the balance right between load lugging and ride comfort. 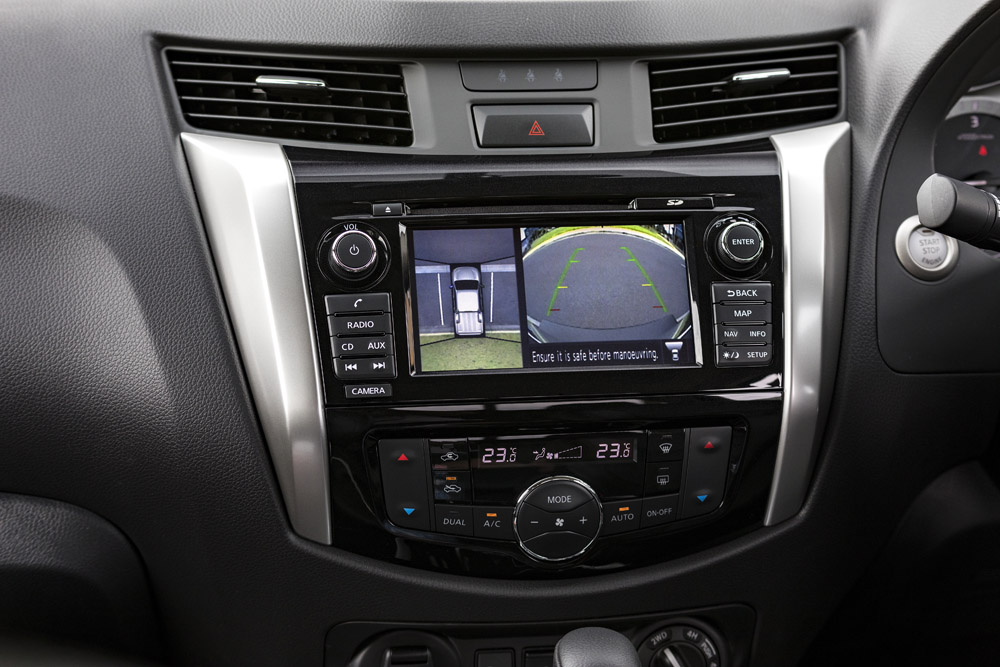 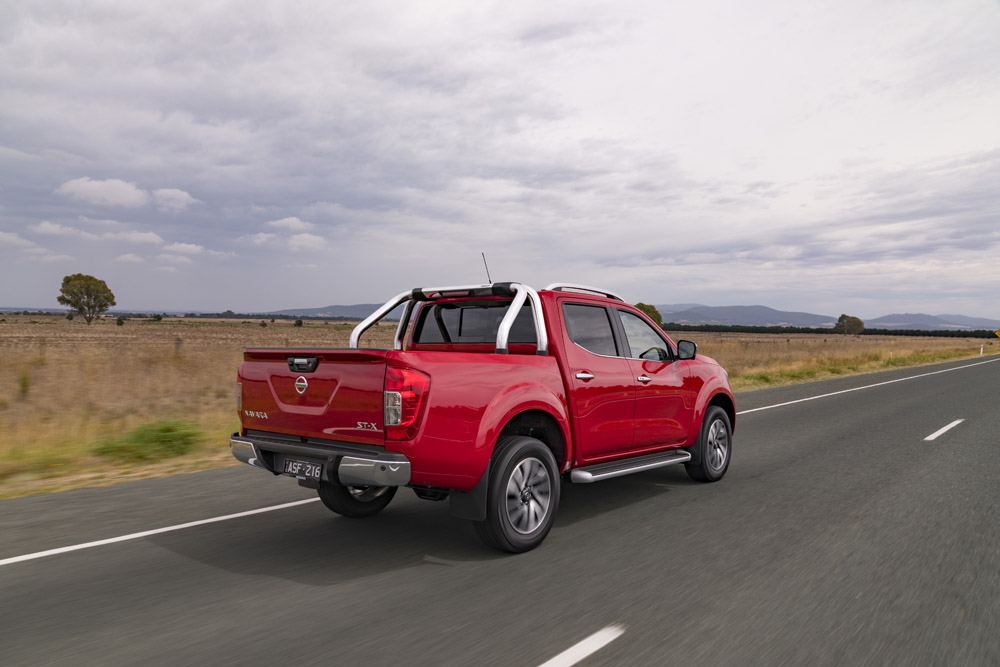 While the former is a given in pretty much any ute, the latter often gets short shrift, despite dual cabs such as this Navara ST-X being used increasingly as a substitute for family SUVs.

Enter the updated MY18 Navara Series III, boasting a range of changes aimed at improving the ute’s ride, handling and steering, while also adding a number of tech and safety enhancements, all aimed at making the Navara “safer, easier to drive and park, and more enjoyable to own,” according to Nissan.

LUX, BUT NOT AT A PREMIUM

While other models in the Navara range get some of the various upgrades, the main beneficiary of the Series III changes is the ST-X Dual Cab we have here.

The ST-X now boasts a 7in infotainment system, with satellite navigation and what Nissan calls an Around View Monitor.

The latter uses four mounted cameras to give the driver a virtual bird’s-eye view, helping to see people and cars that may be surrounding or approaching the vehicle.

It’s a great safety aid but also makes parking easier by displaying adjacent cars and marked lines as you park.

A rearview camera is also now part of the Navara’s safety and convenience repertoire. This essential safety feature is fitted as part of the infotainment screen on the ST-X, and as a small video image within the rearview mirror of lesser models. Rear parking sensors are also included as standard.

It was noted the last time we tested this version of the Nissan Navara that it lacks some of the latest driver-assist systems including trailer sway control, lane departure warning, active cruise control as well as autonomous emergency braking, all of which are still absent in this version.

That said, the Navara is not without an array of electronic safety aids, including anti-lock brakes, traction control, vehicle dynamic control and brake assist, to name a few.

It’s also well-equipped with driver and front passenger front and side airbags, driver knee airbag, and front-to-rear curtain airbags, all of which contribute to its five-star ANCAP safety rating.

As before, the Navara ST-X cabin is a decently comfortable and upmarket place to be, with a long list of standard features, contemporary design and a consistent use of quality materials throughout. Even the faux bits of chrome and brushed aluminium on dash and door trims appear durable and help to break up the slabby blackness of the interior.

New to this update is a handy digital speedometer, housed within the main instrument cluster between the analogue tacho and speedo, while the rear bench rear seat now features two ISOFix child-seat mounting points.

The latter is a typical-for-the-category upright affair that seats passengers in a knees-up, straight-backed position, but there are good-sized door cutaways for drinks, seat-back map holders as well as overhead grab handles either side.

This ST-X also came fitted with the optional $1500 leather-accented seats and door trims. The seats feature a perforated leather-like material, with the front pews heated and boasting eight-way power adjustment on the driver’s side.

You sit nice and high but the seats initially feel a little over-padded and, in conjunction with a high hip-point and legs-forward driving position, it feels a bit like you’re sitting on an orange crate. However, after only a short time at the wheel you adjust and I soon found the seats and driving position to be decently comfortable.

A dash-mounted rotary dial allows a selection of 2WD, 4WD high and 4WD low, while other traction aids include an electronic rear differential lock and hill descent control.

There are two 12V plugs in the cab and another in the tray, plus a USB plug for powering phones and other devices.

The cabin roof is lined in a light-grey soft-finish flock lining that completes the comfortable interior package.

Out back in the tray, the existing Utili-track load restraint system has been enhanced with four additional tie-down hooks located lower within the tub, plus a factory chrome rollbar with hi-mount stop light. Our test model also came equipped with a soft tonneau that finishes the ‘look’ nicely.

Despite the upgrades elsewhere, Nissan has chosen to leave the Navara’s YS23DDTT diesel alone. The popular 2.3L intercooled twin turbodiesel comes with a choice of a six-speed manual or a seven-speed automatic.

The intercooled turbodiesel is used widely used across the ute segment, but where Nissan breaks from the pack is in the use of twin sequential turbos, where most rivals prefer a simpler single turbo arrangement.

The result is an engine that pumps out a solid 140kW of power at 3750rpm and 450Nm of torque at 1500-2500rpm. On the road, this equates to surprisingly brisk throttle response and almost complete absence of turbo lag. Put your foot down at the lights and there’s the briefest of pauses before revs build and the Navara surges forward, its impressive seven-speed auto seamlessly slurring up through the ratios.

The engine is redlined at 4500rpm but even if you’re really into the throttle the auto will upshift a few hundred revs ahead of this mark. Downshifts are equally smooth and rapid, and the gearbox has a faux-manual mode which allows driver selection of the preferred gears.

HITCH UP THE HORSES

While the last Navara suspension upgrade focused on the dampers, this time around it’s the turn of the five-link rear suspension, which now features dual rate coil springs.

These have been re-engineered, following extensive local testing by a team of Nissan engineers in and around the Bendigo and Kinglake areas of Victoria.

In a bid to better understand Australian roads and driving conditions, a team of chassis engineers visited Australia three times over a period of 12 months, testing the Navara with no load, and then with loads of 500kg and 700kg while towing 3.5t.

The resulting changes to steering dampening, front and rear shock absorbers and rear springs are the key mechanical upgrades to the MY18 model, designed to offer significant improvement to the ute’s ride, handling and steering when empty, laden or towing.

The dual cab’s coil springs were engineered to deliver a lower (softer) rate when unladen, for better ride comfort, and a firmer (harder) rate when laden for better load carrying. The changes to the springs also mean the MY18 Navara sits up 25mm higher at the rear when unladen than its predecessor, and 40mm higher when laden.

The steering ratio was also quickened for more direct handling, with the two changes designed to improve handling while towing.

Due to circumstances beyond our control the CW team were forced to deviate from our usual tow test procedure which sees an author drive the test car in both laden and unladen states. Unfortunately, this wasn’t possible, so the author has driven the car unladen, while senior editor Tim Van Duyl has driven it laden.

Tim towed a sparkling new 2019 Jayco Silverline Outback 21.65-4 over a 230km route, split roughly 80/20 between highway and rural back roads, between Melbourne and the Mornington Peninsula.

Jayco’s Silverline Outback is a sizeable unit, with a travel length, width and height of 8065mm, 2470mm and 3055mm respectively, and a body length of 6760mm.

Its Tare of 2730kg and a towball weight of 190kg are both well within the Nissan’s certified towing capacity.

Van Duyl also noted the engine’s brisk and almost petrol-like performance when unladen, but felt the sequential twin turbo four-pot lacked a bit of urge when laden. With the caravan hitched he said it felt like a non-turbo petrol engine, rather than the usual grunty low-rev performance expected of the turbodiesel configuration.

In van Duyl’s experience the engine “felt peaky, like power was only above 2500rpm,” despite the specs suggesting there’s 450Nm available across a tableland flat torque curve between 1500-2500rpm.

On the other hand, he reckoned the auto gearbox has to be one of, if not the best in class, both when unladen and laden. In towing conditions it rarely needed overriding, the digital smarts almost always choosing the best gear for conditions, as it does when it is unladen. The engine-gearbox combo delivered a reasonable but not remarkable 17.4L/100km over the course of the tow test, while our unladen economy figures settled at 8.5L/100km.

The work Nissan has done on the suspension has definitely paid dividends, with the car riding quite nicely when unladen (firm but far from brutal), and demonstrating impressive stability and steering accuracy when towing. The Navara settles quickly after hitting larger undulations, the dampers swiftly controlling the suspension oscillation and limiting the tendency to pitch. The steering also continues to provide a good sense of directional stability, something that can go out the window on some utes with a decent load out the back.

Braking was exemplary, thanks in part to the factory supplied Redarc Tow Pro Elite V2, which worked flawlessly, as always.

In summary, Nissan’s Navara Series III enhancements have added a useful array of safety and convenience features to one of Australia’s more popular utes. The changes stop short of being a truly comprehensive overhaul, but they serve the purpose they’re designed for: to keep the Navara competitive amidst a fast-moving pack of rivals.

What’s most pleasing is to see Nissan acknowledging that Australian driving conditions are unique, and putting the engineering effort behind it to improve the Navara in a number of key areas. As a result, we are comfortable in saying this third update to the current generation Navara, which was launched in 2015, is easily the best yet.