The tiny, but important, township of Meekatharra straddles the Great Northern Highway about 765km north of Perth and its fortunes wax and wane on the price of gold and enthusiasm of the world markets to buy the precious metal. In the weeks leading up to our visit, the price of gold had dropped considerably and it seemed, by the quietness of the streets, that the town’s star was in the waning quarter and any business based there was either on life support, or looking for it.

We said goodbye to the town and left the bitumen behind, first checking out the nearby Peace Gorge about 5km from Meekatharra. This place was known as The Granites prior to WWI and it has a striking similarity to Tibooburra in north-west New South Wales. At the end of WWI, soldiers were welcomed back to the Meekatharra area with a gala picnic and sports day and The Granites become Peace Gorge in the hope that is what would follow. 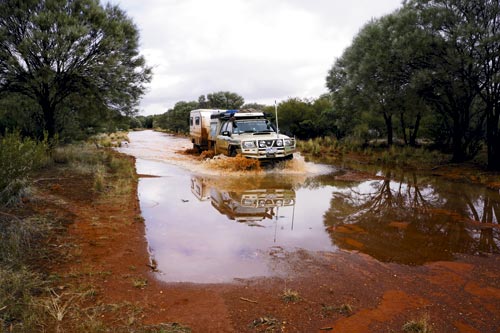 MEEKATHARRA TO THE QUOBBA COAST

The road north-west cuts across sparse pastoral country and is itself cut by creeks and rivers that flow into the Murchison River, which we crossed near Moorarie. This route is an Outback Pathway and part of the Kingsford Smith Mail Run, a venture to promote tourism throughout the Gascoyne Murchison region of Western Australia. While it’s a good idea, it seems by the worn and vandalised signs that dot the route to be a somewhat forgotten venture.

We stopped at the renovated Mt Gould Police Station on the banks of the Bedaburra Creek. Operational from 1888 to 1902, it seems the police’s main job was to apprehend any Aboriginal blamed for cattle spearing. Nearby is the grave of an early worker on the surrounding station who drowned in a well. For today’s travellers, a tank now delivers pretty good water from a nearby windmill-topped bore.

It was somewhere north of Mt Gould, as we headed north-east towards Peak Hill, that the heavens opened and we stopped for a couple of nights as the rain tumbled down.

The rain finally stopped 24 hours later, but we waited until the following morning before we poked our rigs out onto the main dirt road and headed for Peak Hill.

This old ghost town was once the centre of a rich goldfield that, back in the mid-to-late 1890s, included a number of rich underground mines, although alluvial gold was scarce. During that first ‘rush’, the field produced 270,000 ounces of gold. A later, more modern exploitation of the gold resource during the 1970s and ’80s produced four big open cut pits and another 650,000 ounces of the rich metal. Today, more mining companies are exploring the region, while the occasional fossicker turns up a gold nugget or some relic of the old days.

We wandered around the old townsite gathering a few relics from when the town boasted a couple of pubs, a bakery, a newspaper and more. Today, however, the only resident is Chris, a jack-of-all-trades working on the roads for the local shire or for the mining companies. In his spare time, he explores the old gold sites and swings a metal detector, his efforts rewarded with lots of old coins, including a magnificent 1898 gold sovereign, some fine nuggets and lots of small stuff he has smelted into a small ingot of gold.

After visiting the old Peak Hill cemetery, Chris took us to an old mine, the drive cut deep into the side of a hill. As we followed him into the mine, the tunnel branched as the miners of old chased a vein of gold bearing quartz. Small bats flittered around us, upset by our intrusion but not touching us, their echo location system working well, we were relieved to find.

We next headed to Carnarvon, just 40km or so west, where we checked out the rich market gardens that grow a wide variety of fruit and vegetables, as well as the old historic quarter down at the 1-Mile Jetty.

We crossed the Gascoyne River on a low causeway and found our way to Miaboolya Beach at the mouth of that mighty river. Just inland from its sandy estuary, the river breaks into a number of channels lined by mangroves, the maze of waterways offering good fishing and crabbing. At the mouth, the river arcs across a wide, sandy beach before oozing into the normally placid sea. The beach, well-liked by fishing rod-adorned 4WDs and ATVs, is also an extremely popular and important turtle nesting area.

Taking the bitumen highway north for a short distance, we took the Quobba Point Road where we turned onto the dirt just below the tower of the Quobba Point Lighthouse. The junction is marked by the distinctive and blunt warning sign ‘king waves kill’, aimed at the many fishermen who chance their lives fishing from the clifftops and rocky ledges that line this section of the Indian Ocean.

When we were there it was calm and the many blowholes that the rocky coast is also known for were just making a feeble puff and a barely-audible sigh.

South of the junction is a long stretch of coast called the Blowholes Camping Area, managed by the local shire. It’s a popular spot with short termers and long-time stayers and you can launch a boat or go swimming and snorkelling in the protected lagoon nearby, where fishing of any sort is banned. For many, it’s heaven on earth and, once you see it, you’ll understand why.

The dirt road stretches north from the junction to such magical spots as Quobba station, magical Red Bluff, alluring 3-Mile and the protected sands of Gnaraloo Bay... but that is another story!

There are three Outback Pathways stretching across the Gascoyne Murchison districts of WA, all of which are worth travelling and taking the time to enjoy.

WHAT TO DO IN MEEKATHARRA