The pink granite peaks of the Hazards form a magnificent backdrop to the sheltered waters of Great Oyster Bay in Freycinet National Park, with Mt Amos rising to 454m. The park is one of Tasmania’s most popular, recording about 160,000 visitors a year.

The Hazards are not – as you would expect – named after the hazardous nature of the peaks, but rather after American Albert ‘Black’ Hazard, captain of a whaling ship active in the area in the 1820s.

World-famous Wineglass Bay was voted one of the best 10 beaches in the world by US magazine Outside, and Friendly Beaches was rated by Channel 9 as one of the top 10 beaches in Australia. If this doesn’t convince you to visit Tasmania’s first national park, then consider the climate: nearby Coles Bay experiences more than 300 days of sunshine a year, beating Queensland’s Gold Coast. 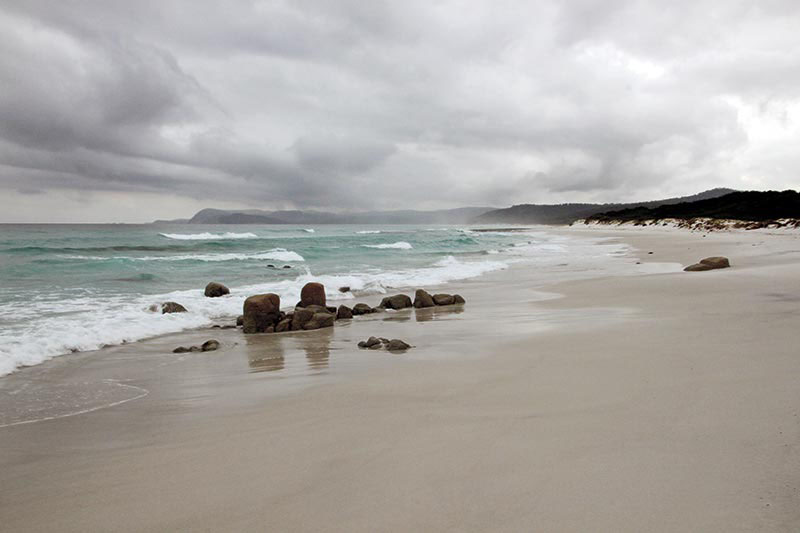 A two-hour trip from Hobart takes you to this fascinating area, which was first discovered in 1642 by Abel Tasman. The peninsula didn’t bear the name until French explorer Nicolas Baudin named it after Louis-Claude de Freycinet, his lieutenant on the 1802 expedition.
From as early as 1910, the peninsula became a popular holiday spot and was declared a national park in 1916 in order to protect the local flora and fauna. The area was used for whaling in the early 1800s with whale oil and bone providing a very profitable industry. Years of ruthless exploitation severely reduced whale stocks and the industry came to an end in the 1840s.

Today, the whales are returning and numbers are gradually growing. They are still being hunted in east coast waters but this time for different reasons – to get close and take a photo. The best time to spot a southern right whale is during the winter months.
The campground is close to the beach and has magnificent ocean views, but without the expensive price tag. A word of warning, though: you need to keep an eye on the possums because they like to explore your tent and use caravan roofs as a playground. You might want to bring ear plugs because the possums are a loud bunch – they like to use the rubbish bin lids as drum kits. With more than 20 of them around you’ll be surprised at how much noise these little creatures can make.

The 30km Freycinet Peninsula Circuit is only for the serious hiker, and you will need to allow a minimum of two days. The track travels around the Hazard Mountains to Hazard Beach, Cook’s Beach and Bryan’s Beach before crossing the peninsula and finishing at Wineglass Bay. The hike should be undertaken in an anti-clockwise direction to help stop the spread of root rot. Make sure you have a copy of the Freycinet National Park Map and Notes (1:50000 Tasmap), which is available at the visitor centre.

A weekend in Freycinet NP is a great Aussie camping experience, even if the possums keep you awake at night.

Getting there: Freycinet National Park is accessible via the A3 to Bicheno and a turn-off on to the C302 to Coles Bay.

Bookings are advisable at any other time of the year, with full payment required at the time of reservation. Facilities include coin-operated hot showers. Fees range from $13 for an unpowered site (two people) to $16 for a powered site.

Free camping is available at Friendly Beaches but facilities are limited to pit toilets. Please note that national park fees do apply.