Katherine is often referred to as the ‘Crossroads of the Outback’ due to its location 320km south of Darwin and its proximity, relatively speaking, to the Gulf country to the east, the Kimberley to the west and the Tanami to the south.

Not only a geographic intersection, Katherine also stands at the convergence of three major Aboriginal groups, the Wardaman, the Dagoman and the Jawoyn. The Jawoyn people claim the area to the north and east of Katherine as their traditional homeland. Comprised of 17 clans, the Jawoyn nation is one of the largest and most active Indigenous groups in the Top End. Following successful native title claims, the Jawoyn received title, in 1989, to large parcels of land, including Nitmiluk (Katherine Gorge) National Park (NP) and the southern part of adjoining Kakadu NP.

The Jawoyn’s ancestors have lived in this region for more than 40,000 years and their culture and law pervades the entire landscape. In a time they call ‘Buwurr’ (Dreaming), the mythical figure Bula came from saltwater country in the north with his two wives, the Ngallenjilenji, and hunted across the land. In doing so, he transformed the landscape before settling under the ground at a place called Buladjang, north of Katherine. 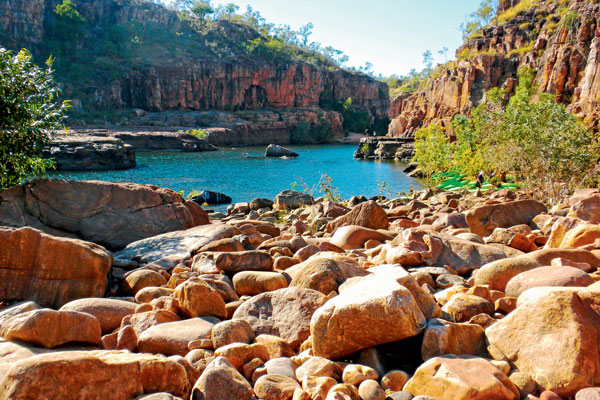 With Bula travelled other Creation ancestors, including the Rainbow Serpent, known to the Jawoyn as Bolung, an important life-giving spirit and an integral part of the seasonal changes and the life-cycles of plants and animals. The many stories and sites associated with Bolung are often linked to water and places where she travelled across the country, moulding ranges of hills, splitting rock faces to create waterfalls and gouging out channels for the passage of rivers.

At the heart of Jawoyn country lies Nitmiluk NP, which title holders call the ‘place of the Cicada Dreaming’. This name was given by Nabilil, a dragon-like figure of the Creation who came from the west near Wadeye (Port Keats). He travelled through dry country, carrying water and fire sticks in a dilly bag under his arm. Other Creation beings tried to snatch the water, but Nabilil eluded them. Eventually, he camped at the entrance to the Katherine Gorge where he heard the song of Nitmi, the Cicada – “Nit! Nit! Nit!” – and called this place Nitmiluk. At a place a long way upstream from the gorge system, Nabilil was ambushed by Walarrk, the Cave Bat, causing Nabilil to drop his dilly bag and spill the water, filling the streams and making Katherine River.

The Katherine River flows 328km from its headwaters in Kakadu NP, joining the Daly River on its way to the Timor Sea. Fed by monsoonal rains for more than 20 million years, its passage across the ancient sandstone plateau has carved a series of 13 spectacular gorges extending 12km between towering 70m cliffs. Swollen by seasonal deluges, the river continues to cut into the sandstone walls, moving tonnes of sand and rock downstream every year.

The 2928sq km Nitmiluk NP is owned by the Jawoyn people and jointly managed under a 99-year lease with the Parks and Wildlife of the Northern Territory Commission. The lease guarantees the Jawoyn people employment opportunities within the park and traditional rights for activities such as hunting, food gathering and ceremonies.

However, Jawoyn tradition holds that Bolung still inhabits the deep green pools of Nitmiluk’s Second Gorge and their law imposes special restrictions on behaviour so as not to disturb or offend her. If she is disrespected or annoyed, Bolung can unleash dangerous and destructive forces in the form of spectacular electrical storms, ferocious winds or monumental floods, far exceeding the elements normally experienced in the wet season. And her wrath has been evident on several occasions in recent history.

In late January 1998, Cyclone Les dumped 400mm of rain on the region in just 48 hours, causing the already full river to peak at 20.4m, devastating the town and 1000sq km surrounding it, forcing the evacuation of 1100 homes and claiming the lives of three people. Then, in early April 2006, the Katherine River again burst its banks, resulting in the declaration of a state of emergency. Floodwaters reached a peak of nearly 19m at the Katherine River Bridge, inundating the town centre and scores of homes, and causing millions of dollars of damage.

During the dry season, visitors may swim off the jetty in the First Gorge but, for safety reasons, not in the vicinity of the boat launch area. Freshwater crocodiles inhabit the gorges but pose far less of a risk compared to their saltwater cousins. The river is generally closed to swimming throughout the wet season due to unsafe currents and the increased potential for saltwater crocodiles to swim upstream into the park on higher water levels.

Paddling a canoe beneath towering sandstone is an unforgettable experience and one of the most enjoyable ways to see this amazing landscape. Nitmiluk Tours hires out single or double canoes for a half day, which is usually ample time to see the First Gorge, or full day, which will get you right to the end of the Third Gorge (and back). The more adventurous can hire one overnight and reach the Ninth Gorge, with camping facilities at several locations along the way, but be prepared for some strenuous portage (carrying the canoe) at sharp and slippery rock bars between the gorges. It’s also possible to use your own canoe in the gorge, for a registration fee and a refundable deposit.

The park has an excellent network of walking trails, extending for about 120km through a diverse range of landscapes. The walks are divided into the Southern Walks and the Jatbula Trail on the northern side of the gorge. The Southern Walks consist of one long trail across the sandstone plateau, with tracks branching off it to stunning lookouts, descending through palm-filled rainforest gullies to the river at six locations. Walking along the gorge rim is easy enough, but the side-tracks can be tough with some steep sections and loose, rocky surfaces. These are serious hikes that require sturdy shoes, a hat, sunscreen and plenty of drinking water. Water bottles can be refilled at tanks strategically located along the way and from the river at the end of each walk.

The Jatbula Trail is a 3-5 day hike, beginning on the northern side of the gorge and following a 66km, one-way, overland route travelled by generations of Jawoyn people to Leliyn (Edith Falls). It is named for Peter Jatbula, who was instrumental in securing land rights for his people. This challenging trek traces the edge of the Arnhem Land Escarpment, traversing savannah woodlands, rocky outcrops and pockets of lush rainforest around spring-fed creeks. The trail also encounters Aboriginal rock art at the Amphitheatre and the Northern Rockhole, a beautiful shimmering pool beneath a plunging waterfall. The walk is well marked and not technically difficult, but you’ll have to be reasonably fit to carry a heavy backpack for the multi-day foot slog over rough and uneven country.

However long your stay at Nitmiluk, the spectacular beauty and rich Jawoyn culture of this ancient landscape are guaranteed to provide memories that will last forever.

Katherine is about 300km south of Darwin along the Stuart Highway. The entrance to Nitmiluk National Park is 30km north-east of Katherine along Gorge Road, which is sealed but may be impassable in the wet season.