With a bunch of new mid-size 4WD wagons and utes now with heavy-duty towing ability, making a captain’s call on which vehicle you’ll select to tow your van with is harder than ever.

One thing all these vehicles have in common, though, is relatively small displacement engines. One truism of towing heavy stuff is that, to re-coin a phrase, there is no substitute for cubic capacity. The bigger the engine, the better the towing performance. There are exceptions to the rule, but the vehicle that not only made the rule, but underlined it, is the Toyota LandCruiser 200 Series. No mainstream vehicle has, so far, proven to be such a capable tow tug.

Late 2015 saw the second noteworthy update to the 200 Series since its arrival here in 2007. Like the 2012 update (which included a minor facelift and minor technical improvements), the MY16 LandCruiser 200 is not so much an overhaul as a tune-up, although this time it has seen some significant technical improvements to augment its new look. 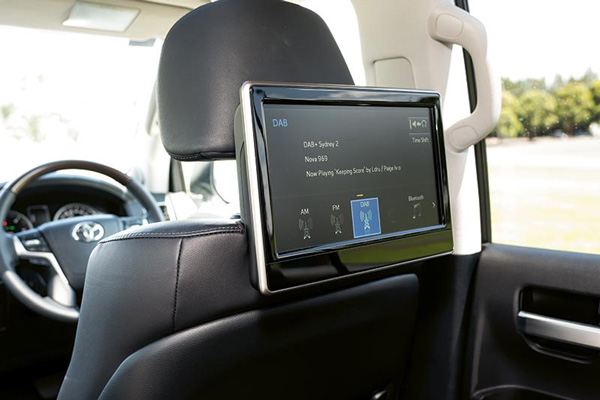 All MY16 LandCruiser 200s have a new grille, headlights, bumper, bonnet and front guards, and a freshened tail that includes LED tail lamps. The interior of the GXL, VX and Sahara now have soft padding around the centre console in areas that come in direct contact with occupants’ legs.

The Sahara also gets a wireless smartphone charger and revised rear-seat entertainment with screens mounted on the back of the two front seats.

The new instrument cluster and centre screen are easy to operate and offer clear, logical readouts. Not quite so good is the overlay of new features and the proliferation of buttons and levers to operate them all. This not a deal-breaker because you do eventually get used to their positions and functions – it just takes a while.

Driving the LandCruiser around town, you can’t help but notice its large footprint on the road. It’s a big truck. However, the cameras give you a bird’s eye view of the immediate surroundings and, with the rear-view camera and large side mirrors, makes manoeuvring a lot less painful than it might be otherwise.

The cargo area is cavernous but the side-fold third-row seats eat into the loading space. At least they’re quick to fold, with the quick-release handles at the tailgate opening making it a seamless operation, and folding them back up is almost as quick and easy. The horizontally-split tailgate has been a LandCruiser staple since the 60 Series, and while it inhibits getting to gear deep in the cargo area it does serve as an excellent picnic table or bench for seating at camp.

This is not a vehicle that could be called the most dynamic SUV in its class – it doesn’t turn in or have the balance of a Discovery 4 – yet it’s a comfortable, smooth-riding, long-distance touring vehicle. Steering is vague off-centre and the big Cruiser favours under-steer often and early. The live rear axle can only do so much when it hits big, sharp bumps or hollows, though. In such terrain, the usually lush ride and planted feel is interrupted by a rear-end wiggle.

While Toyota claims the Sahara averages 9.5L/100km, we achieved a 10.5L/100km figure running solo on predominantly intra-urban roads, and 18.9L/100km while towing a 2200kg tandem-axle caravan.

Not a thing has changed with this latest LandCruiser where it counts – it is still a superb towing vehicle. While we endeavoured to get a van heavier than the one we had, it is still instructive to see what the LandCruiser would do with a medium-weight van behind it. And the Sahara took on the 2200kg van and hauled it like it never had been attached. With a 180kg towball download, there was at no time any yawing or pitching. It’s hard to think of a more stable tow vehicle.

Performance under tow was very good and, if anything, better than previous models. The eagerness with which the Sahara belted up our test hill was incredible. It wasn’t a matter of maintaining speed up the hill – it was making sure we didn’t go too fast. Engine braking was superb heading down the steep, slow mountain pass we negotiated on test.

When Toyota begins to sell the LandCruiser at bargain prices, you know something’s wrong. No, the Sahara is not cheap, but it can’t be denied that this is perhaps the best tow vehicle available in the mainstream vehicle market in Australia. Add excellent resale value and one of the best service and parts networks in rural areas, and it’s no wonder the LandCruiser 200 Series is the go-to vehicle for caravanners wanting the best rig money can buy.

This latest update adds not only a fresh look and added safety and convenience features, but a more responsive (although not noticeably more economical) engine. The best just got that bit better.

The full test appears in Caravan World #548 April, 2015. Subscribe today for the latest caravan reviews and news every month!