The winners of the second two categories ($80K-$100K and $100K-plus) will be announced when the next issue of CW goes on sale early next month (Jan 5).

The Kokoda Veteran XLi Platinum was named the Best Aussie van in the $50K-$65K category, up against the New Age Manta Ray and Jurgens Lunagazer J2405.

The On The Move Vortex narrowly beat out its competition in the $65K-$80K category - Trakmaster's Pilbara Explorer and the Sunseeker Desert Storm. 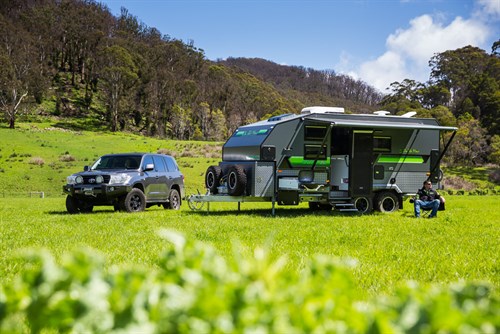 Best Aussie Vans judge Philip Lord said the $50K-$65K segement was a competitive field the and Kokoda's win was due to it "serving up a fine balance of luxury and bush capability".

"Kokoda has not oversold its Veteran XLi Platinum’s abilities by calling it a semi-offroad van, but I think it is as good as most that are pushed as tougher alternatives," Lord said. "The generous 800kg payload, tough underpinnings and clever touches such as the bedroom storage options make this a promising rough-road tourer."

ON THE MOVE VORTEX

Another year and another win for On The Move, taking out its third BAV title in a row.

BAV judge Malcolm Street said On The Move had pushed the boat out with its 10th Anniversary Vortex and the gamble had paid off.

"OTM’s 10th anniversary Vortex was designed using the company’s signature green and black colour scheme. There’s no doubt it’s striking, especially inside, but it’s not something all potential buyers will be happy to live with," Street said.

However: "The 10th Anniversary Vortex is a striking caravan, even without the green and black colour scheme. Built specifically with offroad travel in mind and fully appointed for that purpose – everything from the chassis structure to the grey water tank – the Vortex is a caravan ready to go!"

AL-KO Best Aussie Vans for 2016 took place at the BIG4 Wye River Holiday Park in Wye River on Victoria's Great Ocean Road. With acres of lush green campsites, the peaceful babbling river trickling through the park, and a location literally on the doorstep of the Great Ocean Road and the Otway Ranges, BIG4 Wye River was the perfect base camp.

Caravan World congratulates all the AL-KO Best Aussie Vans' entrants for 2016. Grab a copy of Caravan World issue 558 (on sale now) and 559 (on sale Jan 5) for the full results and reviews or check out our event videos here and below.