A Trip to the Tip

A trip to the tip of Australia is probably on the bucket list of many caravanners and RVers who head for far north Queensland’s sunny climes each winter. That distant rocky point adorned with the simple sign confirming that ‘You are standing at the northernmost point of the Australian continent’ is the quintessential climax to many northern adventures.

But you don’t have to be an experienced offroader or prepared to spend months in the wilds of Cape York just to have your photo taken beside that famous sign. The fact is, during the cooler months, you can get to the tip of Australia on roads that are far from lonely and deserted – roads that, in good weather, can be traversed without even reaching for the 4x4 lever or button. And you can do the trip in as little as a week, including a few days sightseeing at the pointy end.

Mind you… there are the corrugations! And the dust holes… And the red dust that permeates everything. A sprint to the tip is not without its hazards and discomforts, but it is easily do-able by well-prepared travellers. You won’t get to see all the cape’s remote natural attractions, but you will be able to say that you’ve been to the northernmost point of the Australian continent – and have the photo to prove it. 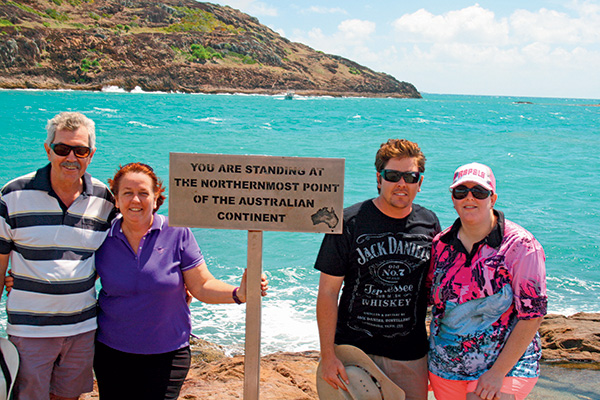 So, if you fancy ticking off another item on your bucket list, here are a few tips to help you get there and back with a minimum of trouble.

Our intention was to get to the tip of Cape York and back in just a week, without subjecting bodies and 4WDs to the vehicle-wrecking offroad tracks for which the cape is famous. From the starting point at Lakeland, the plan was to head up the Peninsula Development Road for 426km, to the Telegraph Road turn-off. Here, we’d veer right and, 114km later, turn right again on to the Bamaga Road at Bramwell Junction. This road would take us, via the Jardine River ferry, to the town of Bamaga, 217km further up the cape. Around 25km beyond Bamaga lies Punsand Bay, a beachfront camping ground within striking distance of the tip. From here, we could visit the tip and other attractions in the immediate area, before retracing our route to Lakeland. The distance travelled each way would be around 800km.

During the Wet (usually November to April), monsoonal rains can cut roads, flood vast areas and turn the dusty tracks into slippery quagmires.

During the dry season (May to October) the countryside dries out, turning from lush green to brown and there is little rainfall. We went in August, but in May, the roads are at their best and the countryside is still green.

Plenty of readers will have taken their caravans to Cape York, but it’s hard to imagine four days of bone-rattling corrugations not doing some damage to the van and the red dust will get into every nook and cranny.

It’s less hassle and heartache to stash the van and camp up the cape. Most caravan parks and roadhouses between Cooktown and Laura will store your RV for a modest cost while you head north.

While you probably won’t need the four-wheel-drive function, a 4WD vehicle is still recommended for this trip, mainly for its higher clearance and load-carrying capacity. Using 4WD will also help maintain stability in gravel and sand. If you don’t own a 4WD, there are hire companies in Cairns, Cooktown and Port Douglas which do.

If possible, travel with another vehicle – this provides reassuring backup if you do experience problems. Travelling with one or more other vehicles will also allow you to spread some gear across all vehicles, saving space and weight.

With no mobile phone service and the vehicles travelling some distance apart to avoid the dust cloud of the one in front, communication can be difficult. If you don’t have UHF radios fitted in the vehicles, 5W hand-helds solve that problem for a small outlay and offer a range of around a kilometre.

A few tips for driving on the cape’s gravel roads:

Travelling these roads requires concentration and sometimes constant speed and gear changes as you search out the least bumpy sections. The best speed at which to tackle the corrugations is hotly debated, but can only be determined by you, depending on your vehicle and the corrugations. Gravel roads with constantly varying surfaces can be dangerous at even moderate speeds. Take particular care on bends with loose surfaces.

Dust holes are sometimes signposted, but many aren’t and they can be hard to see. You’ll need to constantly read the road ahead and avoid any doubtful-looking spots.

Heed roadside warning signs. Dips are numerous and many have potholes or dust holes at the bottom. Slow down and stay well clear of passing trucks.

The roadhouses make a quick trip to the tip relatively easy. Not only do they supply fuel and, in some cases, basic mechanical repairs, but also camping facilities with toilets, showers, washing machines and public phones. They also sell snacks, cold drinks and meals and some have licensed bars. If you fancy a little luxury, donga/motel-style accommodation is often available. Most roadhouses have EFTPOS facilities, but it’s wise to carry cash as well.

Many caravanners will have much of the camping gear needed, such as a folding table and chairs, portable lighting, a gas stove, and a camping fridge or ice box.

A lightweight and compact dome tent makes a poor substitute for a luxury van, but at least it won’t shake to bits on the corrugations. Upgrading the lightweight pegs that come with many of these tents is a good idea, as most campsites have fairly hard ground. Make – or buy – a handful of pegs from 6mm round steel before you set off.

Not all camping grounds have a good supply of potable water, so bring at least 20L of drinking water per couple.

Don’t forget a first aid kit and an adequate supply of any regular medications.

Overloading can be a real killer, so question everything you think you’ll need. Do you really need it? Can you manage with less? Will something lighter do the same job?

Your adjustable towbar hitch can weigh more than 15kg - leave it with the caravan.

You’ll be amazed at the amount of gear you’ll have to fit into your vehicle. Plastic boxes of varying sizes will allow you to sort, seal and pack in an orderly fashion. Some things (lunches, drinks, tools, cameras, first-aid kit, wet weather gear) should be easily accessible. If you have a fridge, ensure there is an air gap around it, so it can function properly.

If you’re packing a roof rack, check tie-downs and fixing bolts regularly as they can vibrate loose.

THINGS TO SEE AND DO

A couple of days at Punsand Bay gives you a chance to rest a little before tackling the corrugations again. This campground is on a picturesque bay, with powered and unpowered sites, two amenities blocks, a laundry, bar, restaurant, pool and a variety of accommodation options. Tours can be booked at the office.

Limited time meant we didn’t see a fraction of the cape’s attractions. One detour we did do was to Fruit Bat Falls, just a few kilometres off the main track. The swim was definitely worth it.

From Punsand Bay it’s possible to reach the hallowed tip of Cape York and visit World War II plane wrecks near Bamaga and historic Somerset Beach, where an outpost was first established in 1864.

With the classic photo from the tip of Cape York there’s one less thing on the bucket list. Looking back, it was much less hassle than I expected. The camping was easy and comfortable, the driving rough but tolerable and the only trouble we had was one flat tyre. You don’t need to mount a dedicated offroad expedition. With a reliable vehicle, a little preparation and the willingness to put up with the dust and a few (million!) corrugations, you too can make it to the tip and get that iconic photo – and live to tell the tale.