So to help you on your way, here are five exemplary offroad vans, all of which featured in CW’s 2015 Best Aussie Vans competition, and all of which impressed our judges with their tough underpinnings, offroad nous and ultimate ‘bush-ability’.

In 2014 we nominated our top 12 best offroad caravans at the time. Now, we bring you our favourite 2015 releases. 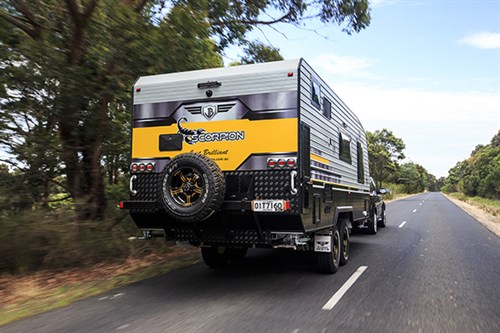 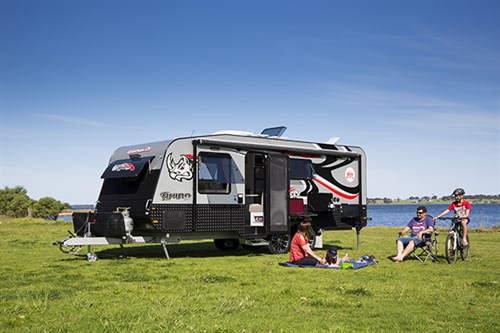 With its bush-ready armoury and cache of creature comforts, the JB Scorpion certainly has a ‘sting in its tail’, and will take you way off the bitumen.

It has a comprehensive electrical suite to keep you powered up, including three 150W solar panels, two 120Ah AGM batteries and a 1600W inverter.

The front of the 6.22m (20ft 5in) Scorpion is home to a massive aluminium checkerplate storage box, which houses two 9kg gas cylinders and has space for a slide-out fridge or barbecue. The steel bumper at the rear supports two jerry can holders and the 16in spare wheel, which is shod, like the road wheels, in Cooper Discoverer STT offroad tyres.

Powder-coated black checkerplate adorns the lower sections of the van’s sides and front, and the rear has a slight kick-up to improve the departure angle.

On The Move Traxx

As a mid-range van, the 5.69m (18ft 8in) Traxx has bucketloads to offer travellers who want to get off the bitumen and into the bush.

It’s fitted out for the job, too, and is an impressively-built caravan with a high degree of electronics sophistication. It has a 170Ah lithium battery, two 150W solar panels, a 35A charger and a FinScan Nucleus controller to monitor it all.

And it has all the goods to get you there with a SupaGal-treated 6x2in chassis with boxed longitudinal sections welded to a 6x2in A-frame, trailing arm independent suspension, with a coil spring and dual dampers at each wheel, and a Hitchmaster DO35 offroad coupling.

With a Tare weight of 2322kg and an ATM of 2900kg, the Traxx has an excellent payload, perfect for loading up all your bush camping essentials.

For a couple who want to get away from it all, the fully kitted-out offroad-ready Traxx offers visual appeal, a quality build and real remote bush camping ability.

Trakmaster’s Pilbara Extreme is an impressive, self-contained offroader, underpinned by experience. It’s built on a hot-dipped galvanised chassis and designed for cross-country travel, with a raked rear end to give a good departure angle.

The appeal of this 5.31m (17ft 5in) van lies in its engineering and fine attention to detail, and its shorter body length will certainly be an advantage on narrow or heavy undulating bush tracks.

It has such a comprehensive suite of features within its relatively diminutive body that you can’t help but feel it represents great value for money, and the 200Ah lithium-ion battery system and Trakair trailing arm airbag suspension are two stand-out features not often seen in a caravan.

It has a somewhat unconventional front kitchen and ensuite layout with two single beds, which provides a very cohesive and spacious internal layout.

There are two 135W solar panels, and two 82L water tanks and one 80L grey water tank, which is an excellent addition for off-grid escapades into national parks.

If remote bush caravanning and offroad adventuring is on the agenda, you can’t go wrong with this 2424kg Tare rig. It feels as though it has been hewn from rock and is built solid.

For a couple who want to enjoy a life of luxury while out in the sticks, the top-of-the-line Patriot delivers in spades. Roughing it has never been so easy.

The 2750kg Tare and 3500kg ATM van has a punched alloy and galvanised steel hybrid chassis, designed to retain strength while reducing its weight. It rides on Cruisemaster independent suspension, fitted with coil springs and shock absorbers, and 17in alloy wheels.

The quality here is clear to see – nothing is out of place and only the best materials have been used. On the outside, blue Raptor Coating protects the lower part of the van from stone chips and road damage.

The very sophisticated electrical setup includes two 180Ah lithium batteries, 360W of solar and a Giant Power 2400W Integrated Power System. One of the Patriot’s party tricks is the ability to run high current draw items, such as the air-conditioner or a hair dryer, off the lithium batteries.

With style in spades, ultra-modern technology and a whole heap of offroad nous, the 6.4m (21ft) Patriot SEL-X is a seriously impressive rig.

Families on the hunt for a tough offroader should set their sights on the Goldstream Rhino 2300 Family Bunk – a very strong, well-built caravan with all the ‘bells and whistles’.

The Rhino has all the space, comfort and features for a family intending to go almost anywhere in Australia. The 6.92m (22ft 8in) tandem-axle offroader sleeps five and there is an abundance of room in the main living area, plus a large bathroom and plenty of storage. With a Tare of 2890kg and an ATM of 3500kg, there’s plenty of payload to play with, too.

The Austrail chassis has 6in main rails and a 2in box section and the DO35 hitch allows for greater articulation offroad. It’s built to last and go the distance, riding on Cruisemaster XT coil spring suspension and 20in alloy wheels and tyres.

High checkerplate adorns the lower reaches of the van and it looks smart with its imported silver composite aluminium cladding.

The Rhino is well set up for independent camping with a Redarc 1230 battery management system and dual 105Ah batteries. And with 480W of solar, not only can you go off the grid you could probably add power into the grid!