When we buy a caravan, whether it’s new or second-hand, we may see ourselves also buying the answer to all of our dreams. Or we may, instead, be acquiring a blank canvas upon which we can paint a dream of our own, using our skills and aspirations to reimagine a caravan that answers, in its own unique way, our own personal desires.

For many caravanners, the pleasure drawn from a successful modification, addition or improvement to their caravan is the justification for the time and money spent.

Having a new, personally-installed feature work for you can add a whole new dimension to your travelling experience. 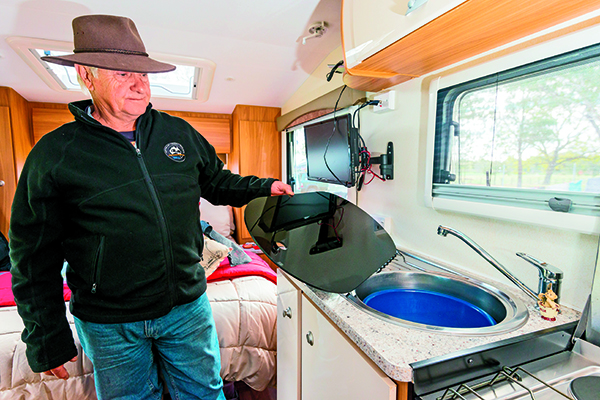 When you can’t get away – whether due to family, business, or economic reasons – it doesn’t mean the van has to sit forlornly in the driveway. It can become the object of your DIY endeavours and, therefore, enhance both your own pleasure, and that of your partner or family.

We took the opportunity to travel to the central New South Wales town of Gulgong to take a look at three caravans and meet their ‘DIY’ owners.

Peter and Karyn Sluyter from Brisbane, Qld, have been campers and travellers from when they were small children, coming from families with long commitments to enjoying the outdoors.

Peter can recall his parents borrowing a tent when he was about 10 to take a trip to Dicky Beach, and he still uses several ropes which came off the tent the family bought after that. Karyn’s family were big on bush camping, with open fires, an Esky and no floors in the tent. She remembers what a big day it was when they finally got stretchers to sleep on.

Peter and Karyn remained tent campers until 2009, when they decided to move up to a camper trailer. They bought a Trackabout camper before moving on, in 2013, to their current Galaxy van, which they nicknamed Serenity, in honour of that famous line from the movie The Castle and after the ship in the series The Firefly.

The decision to buy a van came about because Karyn was having trouble with her shoulders and Peter with his back, so they wanted to simplify the set up and pack up process. They chose the Galaxy because the company could match the offroad credentials that Peter desired and because Karyn liked the island bed. Both liked the pop-top format for its lower profile on the road and its better feeling for the elements when set up.

As with many caravanners, it’s the rear of the Sluyters’ van which was the epicentre for several significant modifications. Peter added a 100mm PVC pole carrier, into which he inserted a diagonally-cut end section of 75mm poly pipe and end cap attached to a cord. Simply pulling on the cord extracts the poles with ease.

A stepladder is always a useful item around a caravan, and Peter carries his inverted in a jerry can holder added to the bumper. The ladder is held tightly in place with a ratchet strap, with a wire security tie added to prevent its removal without the Sluyters’ approval.

It’s an old adage in caravanning that everything should have at least two uses so, when Peter set out to design an entry step, he made a simple ply box that also serves as storage for his and Karyn’s shoes. Actually, to be honest, it originally served to hold pots and pans when they were camping in their Trackabout, but it proved to be the perfect height as a step for the van. Peter added four strips of non-slip material to the top and rope handles on each end, with a small elastic loop to hold the lid shut.

John and Penny Heath from Brisbane, Qld, have been campers all their married life, graduating from simple A-framed structures to fully-developed, three-room configurations. But, by 2002, they were over the lack of facilities and decided to invest in a Trackabout softfloor camper trailer.

The Trackabout is an excellent design and served them well – in fact, they still own it, using it for the occasional venture into seriously rough terrain or beach environments. But, in 2011, they set out to find a caravan that was suitable to be towed by their turbodiesel Pajero, was tough enough to take them just about anywhere, and had all the creature comforts that they were looking for. They settled on a Sunland Patriot.

In the four years since they bought the Patriot, it has done more than 20,000km on dirt tracks, and many more on asphalt. It’s been to Lawn Hill, Riversleigh, the Gibb River Road, Oodnadatta, the Strzelecki Track and the Merini Loop. And it has fulfilled every requirement the Heaths have had of it, dust-free and in one piece.

With a Tare of 2300kg, 340W of solar on the roof and Cruisemaster independent suspension, the bathroom-equipped 6.25m (20ft 6in) van has been everything they wanted.

John loves to tinker and has undertaken numerous small improvements to personalise their van. “I love doing a project and having it work on a trip,” he said.

Improvements to the rear of John and Penny’s Patriot include the use of an old backpack on the spare wheel as a garbage bag, rather than paying big dollars for a purpose-made bag, and a clamped-on 9kg gas cylinder holder to carry their converted bottle camp fireplace. There are also two 100mm poly pole carriers and two lengths of 50mm poly conduit running lengthways under the floor to carry the sullage hoses, which keeps them straight and makes their use at a campsite much easier.

A small shelf along the back of the eating nook’s seat was made more useful with the addition of elastic shock cord looped through screw-in eyelets above and stretched around retaining buttons below. Retained against the wall below with an occy strap is a blue waterproof bag which carries the Heath’s rubber flooring mats for outside. Making the maximum possible use of all surfaces and areas ensures comfortable organisation in any van.

Keith and Carol Brown from Blue Haven, NSW, are very new to caravanning, having purchased their first van, an Avan Frances, in April this year. Before that, they were the proud owners of an Avan Cruiseliner for 12 months and, prior to that, had a softfloor camper trailer.

The Browns quite liked their Cruiseliner but felt it was a bit short on storage capacity so decided to make the step up to the van.

Before all of this road travel, they had been keen boaties for more than 30 years, dating right back to their arrival in Australia from the UK. But they figured that, although their 30ft yacht had done an excellent job in taking them up and down the coast, all they were seeing was a thin strip of coastline and, so, they set out to fill in at least part of the interior.

They believe caravanning is a relatively cheap way to see the world. And while they enjoy the luxury of an ensuite and shower in the van, Keith and Carol still prefer to cook outside as they marry the camper trailer lifestyle with their new way of travelling.

“It’s all very similar to the boating world, with the comradeship and the helpfulness that’s shared among fellow travellers,” Keith added.

A well-stocked wine cellar is a vital travelling component for both Keith and Carol. Keith equipped an under-seat storage space with a sheet of plywood on sturdy wooden stands that supplies a safe home for 15 bottles, with room around the edges for a few glasses, soft drinks and other items that can afford to travel in the provided space. So far there have been no breakages.

Carol found the bench space in their Avan Frances was a bit limiting, so Keith solved the problem with a sheet of dark polycarbonate which matches the colour of the lift-up cover for the stove. He made a template in ply, which matched the curved shape of the sink and drainer, and had the polycarbonate professionally cut out and the edges neatly polished for a cost of $50. Now they have a much larger bench, and the sheeting serves as a splashback behind the sink.