– Solarpanelis:
A condition in which an RV owner has an irresistible compulsion to continually improve and expand their solar panel setup, seeking maximum efficiency.

SOLAR IS ALL THE
Gone are these days, especially as people take more and more luxuries with them on the road. For most, it’s a simple case of getting a panel and regulator and having it wired into their RV’s system. But some people just can’t seem to help themselves.

I came across the worst case of Solarpanelis I have ever seen when I met Alan and Amanda Haworth, from Leumeah, NSW, who have constructed a huge 215W rotatable solar setup on the roof of their camper. Alan calls it his Altech Panelmaster.

Alan, who works as a maintenance engineer, built the camper at home, developing what had been intended as a storage trailer into a one-of-a-kind rig.

The camper’s original design featured a single solar panel mounted flat on the roof, which was expanded to two as the batteries grew to three 75Ah units, and then to three 120Ah.

But Alan soon discovered laying them flat isn’t the best way to get solar panels operating anywhere near their maximum capacity, so he started coming up with a few new ideas. One thing led to another and a few weeks later he was back in the garage with angle grinder and welder, bringing his latest idea to life.

The rig’s construction is based around a T-shaped 50x25mm RHS frame bolted to the trailer, with a 50mm square steel post hinged on 5mm tabs sitting in the centre. A rotating 40mm round post, which allows the panels to be moved in a full circle, runs down the centre, and can be clamped to stay in any position.

A short length of the 50mm square tubing at the top is hinged on another pair of 5mm tabs welded to a length of 50x25mm RHS tubing, which supports the aluminium frame mounting the panels. The top tabs and the short section of 50mm square tubing are drilled to allow a pin to be inserted in order to hold the panels at the desired angle, thus optimising solar input.

The bottom sides of the two upper tabs are shaped to fit into matching cuts on the tabs mounting the lower end of the gas struts. This supports the frame when folded down on the roof and holds it securely during transit.

Alan already had single 70W and 65W panels so, just to stick with the imbalanced nature of the arrangement, he added an 80W panel, mounting them all on top of a 25mm square steel frame. A surrounding aluminium skirt is designed to keep dust and moisture out when the structure is lying flat on the roof.

The whole lot is locked down by a spring-loaded pin with a handle on one side. When the pin’s handle is pulled the 100kg setup is then free and two gas struts take the weight, easily raising the centre post.

Alan can then pull the pin on the top hinge and move the panel to the best angle, spin it to the desired orientation, tighten the clamp and sit back and watch the watts flow.

Alan uses 25A cable to link the panels and 120A cable from the PL20 regulator to the batteries. He keeps the cabling long enough to permit the panel to rotate 360°.

All up, the project cost less than $200, aside from the panels and regulator, with everything other than the electrical fittings coming from a local hardware outlet. By making the panels adjustable Alan found they are around 23 per cent more efficient.

And do they work? Well, Alan has up to 12A flowing into his batteries, so he can turn up the sound system, switch on all the lighting and have the fridge opening and closing as often as he likes. Now that’s a holiday. 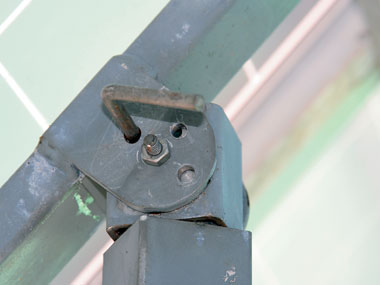 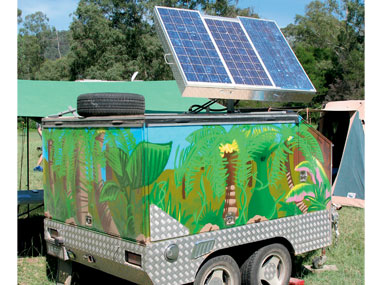 Russell Jurd, from Bellbird, NSW, suffers from a less severe case of Solarpanelis and his solar panel setup is, in many ways, more achievable for the average RVer.

Russell has his twin 60W panels mounted off the winch post, which is attached to the drawbar of his Cub Camper. A round steel post, into which he drops a smaller diameter tube, is mounted off the front of the Cub’s winch. A screw-in clamp locks the inner post in the desired position, and the inner tube and mounting frame travel inside the camper. The inner tube has been hammered flat and drilled at the top to bolt on the aluminium frame for mounting the panels, and to provide a pivot point to adjust the angle for optimum solar input.

The tube has also been cross-drilled above the point where it extends beyond the outer post in order to provide a mounting point to secure the lower end of a diagonal brace, which runs from the front of the panel mounting frame to secure the chosen angle. The two panels then drop into the aluminium frame and can be easily angled and rotated to achieve optimum exposure. The power is run through a two-stage Projecta regulator to two 115Ah batteries.