The Boatavan, conceived by engineer Theo Haass, is new, split-level caravan that’s designed to carry a 4.3m boat and trailer. The Boatavan has a bathroom on the ground floor and the main living quarters above a garage, where the boat is stored. The boat and trailer load into the garage via integrated drop-down ramps and an electric winch. The Boatavan will be on display at exhibit 205A at the Melbourne Leisurefest show.

Meanwhile, DesignerVans has teamed up with Accessavan's Anthony Wake to release the new generation of the popular wheelchair-accessible van. The latest incarnation has a slide-out ramp in place of a longer ramp that ran forward alongside the van. This is due to the Accessavan’s new, height-adjustable, air-suspension system, which lowers the van 200mm from its normal ride height so that the ramp can slide out from under the floor. The Accessavan will be on display at exhibit 66 at the Melbourne Leisurefest show. 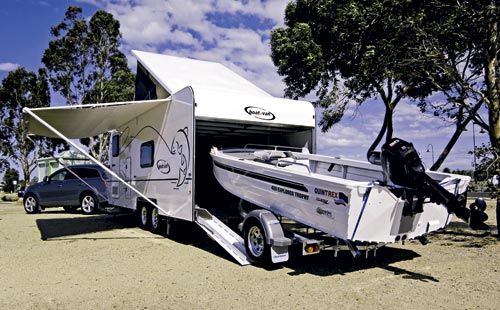