King George whiting are high on the hit list of dedicated fishos from Jurien Bay in the west and right around the southern half of Australia to Botany Bay in the east. These little silver flashes are fitting fare for a monarch’s bountiful table, yet their coastal habits make them available to royalty and peasants alike. They’ll scrap on light tackle better than the Knights of the Round Table and can be found from the deep blue right up into coastal bays, estuaries and even on golden sandy beaches. King George whiting are local heroes from the realm of little Aussie battlers.

King George whiting are endemic to our southern coastline. They shouldn’t be confused with their 13 other cousins, the most popular of these being the sand whiting which can be found from Cape York to Tasmania and beyond. Sand whiting are generally a smaller, stout fish and more golden than their spotty, silver-plated royal cousins. The eating qualities of both species are fit for the king’s table with a very delicate, clean white flesh that cooks up very well in just about every manner, especially filleted, butterflied or deep fried as a whole fish, with a very light coating to seal in the goodness. 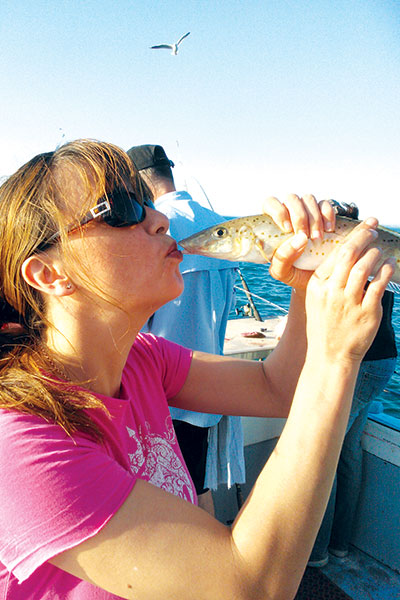 Whiting are a terrific target for the travelling fisho, with their coastal foraging habits making them accessible to both shore-based anglers and those with roof toppers and paddle craft alike. I have personally caught lovely whiting in water as shallow as one metre and then travelled to deeper waters finding them in 30m and more. Their feeding patterns bring them into the shallow coastal and estuarine waters, especially where there is a good disbursement of seagrass fields scattered with sandy patches. The whiting forage through these areas, feeding on small crustaceans, worms, molluscs, nippers (bass yabbies), small shrimp, sand fleas and other fringe dwelling morsels. They are often found up high over flooded sand banks on high tides and on the edges and drop-offs on a falling tide, feeding on the range of delectables that get washed out with tide and waves.

As a general rule there are more juveniles in the shallows where the seagrass beds provide shelter for their nervous habits. There’s food such as the shrimp in the seagrass, particularly for the juveniles up to around 35cm. The larger fish are said to more often inhabit deeper water, surf gutters and offshore reef areas yet they will also often be found among the juveniles.

King George whiting feed on the bottom using motion sensitivity more so than eyesight to identify their food. They seem to filter the sand, often frustrating anglers with tiny bites where the bait is sucked in and spat back out before the angler has a chance to strike the hook. We liken the successful hooking action to being similar to answering a telephone – ring, ring, ring, ring… STRIKE! Berley always helps and when they are on the chew the action can be fast and furious. There’s often a hot spot which may be a sand patch of only a square metre or two so don’t be afraid to all cast into the same area to keep the fish active and feeding.

All of this action can also attract unwelcome visitors to a hot whiting bite. The arrival of a stingray, large crab, Port Jackson or fiddler shark is bad enough, but the arrival of predators such as pike, large Australian salmon or barracouta will shut down a hot bite instantly. The nervous whiting school often moves on immediately, or can often be relocated by casting further away from the hot spot with the school now cruising the outer edges. If you are in a boat you may wish to let out a little more anchor rope, or even up anchor and move to a new spot to start the process all over again. The berley will often attract other inhabitants of the shallow seagrass such as flathead, toadies, leatherjackets, wrasse, tommies and grass whiting (strangers), and its often a good idea to throw a squid jig around the same area and it is also the preferred structure for calamari.

We often use a method called ‘tea-bagging’ to tempt a strike. This is simply keeping the bait moving slightly, not enough to spook the timid fish but often just a slow rise or movement perhaps 30 seconds apart. This is particularly effective in areas of little tidal movement or wave action.

You can catch whiting on a wide variety of baits, and lately keen fishos have been finding some success on lures. Many lure fishos target very shallow banks with small surface poppers and find success. Others use soft plastics, generally in small grub, worm or shrimp-like patterns. We were most surprised many years ago when my brother landed a beautiful King George whiting high up in a tannin-stained estuary feeder stream on a 75mm bibbed lure that was intended for bream and estuary perch. (He only got the one before he was chased out of there by an aggressive tiger snake that tried to board their small boat – but that’s another story for the campfire.)

Common baits include sandworm, nippers, mussels, pipis (cockles in SA), shrimp and strips of tenderised fresh squid, yet you will often be surprised when a good whiting takes a liking to your pilchard or other snapper bait. Most bread-and-butter whiting are generally targeted with size 4-8 long shank hooks. I personally prefer the baitkeeper style with the small barbs on the shank, and cocktail baits with a mussel or pipi tipped with a small strip of squid are deadly. The fish will often strip the soft bait and then return for the hardier squid on the tip of the hook and… GOTCHA! You can up your hook size when targeting the larger fish in deeper waters, particularly in the prolific whiting grounds of southern SA.

The preferred rigs can be standard paternoster when fishing from a boat in the deep to a running sinker in the shallower water. On charters we use what we call an ‘idiot rig’ that actually works particularly well. We tie a small swivel to the end of the main line and connect a 6kg trace with a small 120mm dropper just below the swivel where a teardrop sinker can be hitched on easily. This makes for easy weight changes as tides increase and decrease. We then allow around 300-400mm of trace before feeding red glow beads or plastic strip running right down to the hook. The glow beads really do increase your success rate. Make up numerous traces as you can go through quite a few in a good session.

Whiting can be targeted right throughout the day, especially in areas with fast-moving tides. Dawn and dusk and tide changes are always peak times yet these wonderful little scrappers will often come on the bite half way through a tide. They put on a marvellous display of tenacity for their size! Fishing with light threadline tackle is the norm with 4-6kg main lines. Many will fish lighter and enjoy the fight longer but try not to lose a fish as a scared whiting will often swim away from the area taking the whole school with it.

There is little actually known and proven about the spawning habits of King George whiting and I reckon that’s a good thing. They reach sexual ma turity at three to four years of age, with males reaching 30cm in length and females 34cm. Fish of 40cm or more are often referred to as “kidney slappers” as they tend to slap your sides whilst holding the slippery little suckers close to unhook them. Their flesh is delicious, but remember to kill them quickly and keep them cold in an icy brine to maximise their table quality.

We recreational fisho’s often share the resource with commercial fisho’s who feed the general population with these tremendous fresh local species. King George whiting are an important source of local seafood so let’s be a little patient with the pros, eh. I’d certainly rather be eating fresh, locally and sustainably caught whiting fillets than some rotten piece of imported Mekong catfish raised in a polluted sewer!

You can find the full article in Caravan World #560. Subscribe today for the latest caravan reviews and news every month!