NOT FIVE MINUTES after introducing myself to John and Susan Robbins in their comfortable Sydney home, John handed me a carefully prepared list of the changes he and Susan had made to their 2008 Coromal Excel 451 pop-top. The list was extensive. All 70 modifications made over the last two years were carefully catalogued and numbered. “And I’m still going,” John declared.

Indeed he is. Some of these mods, fitting LEDs to internal light fixtures or a paper-towel dispenser in the kitchen, for example, were small jobs. Or at least small-ish.

Others took a bit longer, like replacing every plated self-tapping screw in the external body with stainless counterparts, or making a stoneguard for the water tank.

Big or small, these jobs were carried out with John’s fastidious attention to detail. And this bloke doesn’t miss a thing. For instance, to make opening the zippered windows in the pop-top easier he fitted nylon toggles to every single zip pull. Now that’s dedication.

The pair has travelled extensively in this van and the one before it, a smaller pop-top. They like the NSW south coast around Gerringong and seem particularly fond of the Vic countryside, too.

They’ve been as far north as Townsville and Mackay in Qld, and as far south as Tas, which Susan fondly remembers as “cute as a button and nothing like the rest of Australia”.

Holidaying in the Coromal is usually done over one or two weeks at a time, and since John is now retired they can hook up their new diesel Pajero and head off whenever they feel like, or “any time but school holidays”.

And Harley the dog goes everywhere with them (except national parks, where you’re not allowed to do anything, say anything or even think anything if it arouses suspicion in the minds of authorities that you might be having a good time).

John said most of the changes he’s made to the van were meant to either improve the ergonomics – locating the microwave in a more accessible position – or make better use of existing storage space – additional drawers, supplementing the existing ones with utensil dividers.

John has a high regard for Coromals. “I wouldn’t buy anything else,” he said.

On the other hand, it’s in his nature to fiddle, to modify objects so they better fit their purpose.

John has a practical bent and knows what he likes. As an experienced cabinet-maker who, believe it or not, has actually fitted-out warships and submarines, he can make any change he fancies, and with a deft touch. Basically, if he wants drawers right there, let there be drawers.

We can’t possibly list all the modifications. The list itself would consume an entire page. But suffice to say the owner believes he’s improved on the original Excel, or at least customised it to meet his particular needs.

With Susan’s guidance he’s also made this one more practical. Important items are easier to reach and powerpoints abound. He’s even managed to rig the awning so rain water is diverted towards the ends of the van instead of just running down its flanks. Yep, he’s a clever bloke, alright.

But enough guff. Check out the images to see what we found when we poked around inside this terrific pop-top. 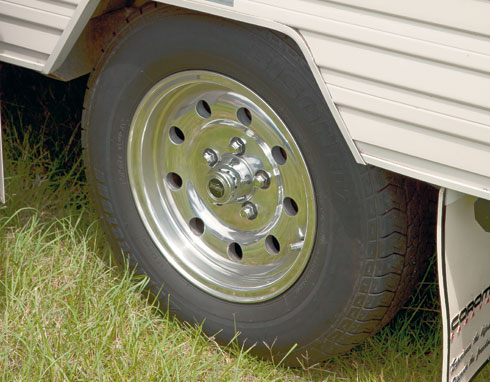 John’s work in the kitchen improves storage space and allows more options when preparing food, important in a pop-top where every square millimetre is precious. Where possible, all internal lights have been changed out with LEDs. Another light was added above the sink and one in the rangehood. Two new taps now live next to the sink; one for the van’s water tank and another for town water when it’s connected.

The drain pipe took up an awkward amount of space under the sink, so John re-routed a new pipe to the rear of the locker where it can’t interfere. There’s also a filter to clean onboard water.

This vertical pantry was part of the original design, but is now enhanced by neat dividers, keeping the contents from rattling around.

There was no drawer here – so John went ahead and made one.

You don’t want to get up too early, so a small brass clock was installed in the headboard, along with a barometer and humidity gauge.

The neat little frame stows washing-up liquid. Wireless gauges (to the right) indicates the temperature of the fridge and water level.

Everything in its place. The boot has been rigged to carry tools and every maintenance item a vanner would likely use on a daily basis. The gas cylinder is also in there, on a custom-made bracket, while clips of one sort or another support everything else.

The original steel rims were changed out for aluminium wheels. They look nicer, too.

The nearside aluminium box in front of the axle holds drainage pipes.