In the January edition of CW, we asked for your memorable wildlife encounters for a chance to win one of six copies of the Hema Tasmania Atlas and Guide (2nd Edition).

We were inundated with amazing stories. Many could’ve sat among our final six, like the one about a snake that got stuck in the bathroom plumbing, one Tassie devil and two spine-tingling crocodile sightings and two encounters with 6ft goannas – obviously a common experience. 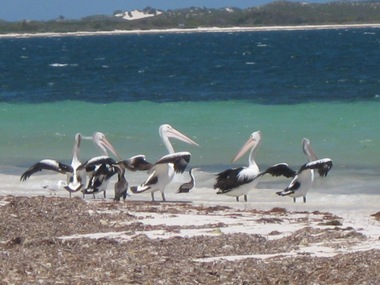 Australia’s a fantastic country, and these encounters should inspire us all to get out there and see more of it, they’ve definitely inspired us at here. We hope you enjoy our six winning entries.

FLIGHT/FIGHT
“A sea eagle flew into a tree near us. We heard what sounded like a jet overhead. Another was attacking, fiercely protecting its territory. An awesome moment we'll never forget.” – Janise Krebs, Bundaberg, Qld. Janise say she was fishing in NT at the time.

A WOMBAT NOSE
“Sleeping in our boat on the Murray a loud thump on the hull made husband put his head through the hatch. He found himself nose to nose with a wombat,” - Karen Bowler.

EAGLE EYE
“While watching pelicans with babies on beach, we looked up to see an eagle with two eaglets just out of the nest and trying to fly with mum catching one,” – Rick Eikelboom, WA.

UNBEARABLE
“Koala at Blanket Bay was being bothered by a bird picking bugs off his back. The koala was trying to swat the bird away an hour later - very funny,” – Kerry Lawrence, Leumeah, NSW.

TURTLE GENERATION
“For four hours we watched as a turtle dug a hole, in one place, then another. At 3am her first eggs appeared, by 6 she was washing off the sand,” – Dale Eastwood, Tas. Dale’s family witnessed the event camping at their favourite site in the Pilbara, Warroora Sheep Station.

ON THE HOP
“Just west of Cooke, SA, we disturbed a wild dog hunt on some dozing kangaroos. The kangaroos fled, followed by the dogs and we followed for almost 1km. Roos safe!” – Kim Thorburn, Pinewood, VIC. Kim said the whole event was over in 30 seconds.

Congratulations to all of our winners, and thanks
to everyone who sent in their stories.

K. Thornburn caught some great snaps of the wild dog-roo hunt. Kim and her crew spotted the dogs first, “then the roos were off like a flash with the dogs following”.

Rick’s daughter managed to catch this gorgeous photo of the baby pelicans on the beach where they spotted the eaglets, but the eagles were just too fast!