We’ve all had the experience of watching a fellow traveller set up their home away from home, and asked ourselves ‘what in god’s name are they doing?’ Or maybe you’ve made a bad site choice yourself and have resolved to ‘never camp in a spot like that again.’

So how do we ensure we enjoy our precious time away and make the most of our camping experiences? It may surprise you to learn that the ancient Chinese principles of Feng Shui may have a genuine part to play — after all, Feng Shui is all about harnessing the elements of wind and water and observing the life forces around us. Which sounds a lot like what should happen when we arrive at a campsite and start planning to set up for the night.

What’s the first thing that you do when you roll-up to camp? In our clan, after stretching our legs, the next thing I do is get out of the rig and take a close look at the surroundings, and ask myself some questions, which usually include: Which way is north? Where is the sun going to come up? Where is the wind coming from? 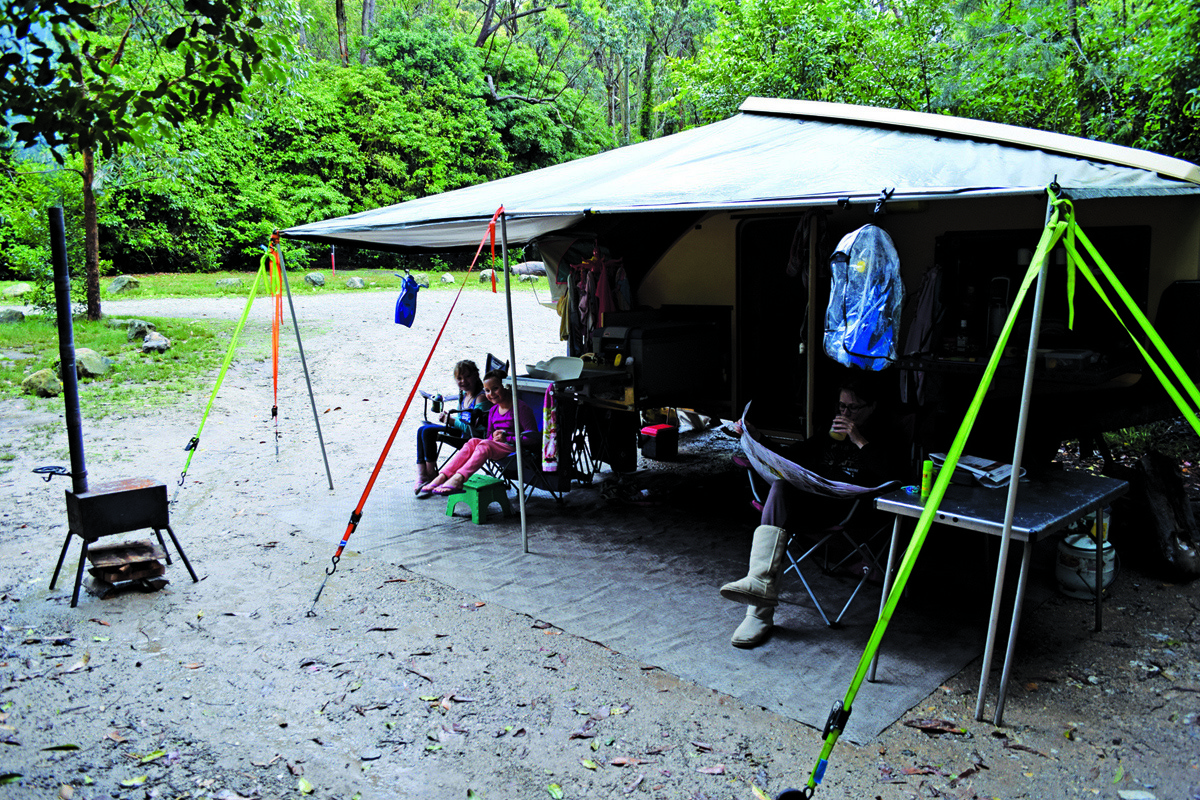 If you asked a Chinese master of Feng Shui what I was doing, he’d probably reckon I was looking for an ‘auspicious site’ with ‘dragon’s energy’, or ‘dragon’s breath’. To my mind, I like to think I’m simply applying common sense — seeking information to inform how, and where, I’ll set up. Either way, the result is the same: a planned and purposeful selection of camp location that maximises what’s good in our surroundings and minimises the chances of getting a pasting if Mother Nature loses her sense of humour.

So, let’s apply some principles of ancient Feng Shui wisdom and see what we can learn about finding the perfect campsite.

STEP ONE — LOOK UP

We all know that standing under a tree during a thunderstorm increases our chances of injury, whether by lightning strike or falling limbs. Well, the same applies to camping under tall trees. This is particularly the case in Australia because our native eucalypts have evolved with a natural stress reaction which can see them drop branches at any time, under any conditions, without notice.

The ancient Chinese may not have spent much time under eucalypts, but they obviously spent enough time under heavy beams to know they are bad juju. Apparently, beams affect the energy flow and can negatively influence our long-term health. Which is why Feng Shui advises that we should never sleep under beams.

STEP TWO — WATER IN THE FRONT

Feng Shui teaches us that placing water at our front door supports the free flow of positive energy and has many other health benefits too. As campers, most of us will instinctively face our camp towards water. We do it because we enjoy the views and because bodies of water are generally moving corridors for air movement. Air movement brings fresh air and diffuses unpleasant odours, whether natural or man-made.

While there’s a lot to be said for the positive healing power of water, this natural element can carry as much bad energy as good — particularly if we don’t know what we’re doing. Water is one of the most powerful forces of nature. As campers, we need to respect this fact and position our campsites accordingly.

For example, if you face your camp towards the ocean — with little protection around you — you may rapidly find yourself the target of an onslaught of inclement weather that will rip a poorly planned camp to shreds. Similarly, if you camp too close to the river’s bank, the rainstorm that’s occurring 100km upstream could quickly turn your campsite Eden into a setting worthy of a visit by Noah’s Ark.

STEP THREE — PROTECTION AT THE BACK

In Feng Shui, we learn that we can produce strong energy by protecting our backs. This principle is critical when camping to ensure that we are not unnecessarily exposed to the elements. We need to find sites that generate an appropriate balance between protection and openness.

Applying this mindset, we shouldn’t camp in a depression. Even though it would be well protected from the wind, cold air will settle there and when it rains we’re likely to find ourselves in a quagmire. Equally, it’s silly to camp on a bald hill where we’ll be exposed to every gust of wind and will have to endure the full force of the sun’s rays from dawn to dusk. Instead, we might choose to camp with a grove of vegetation to our rear, preferably in the north where it will cast its shadow on our campsite during the hottest part of the day while promising sunlight in the morning and afternoon.

STEP FOUR — BEND IN THE ROAD

Feng Shui teaches us to stay on the inside curve of a bend in a river to avoid the more violent floodwaters on the outer bend. While self-evident, this principle has a broader application than a simple commentary on water flow. Consider, for example, your campsite in a caravan park.

If you’re camped on the outer bend of the park’s access roads, you’re at far greater risk of injury or damage than if you’re on the inside bend. Think about the trajectory of a vehicle and caravan as it manoeuvres around the park’s laneways. The tendency will be for it to drift towards the outside bend, which means that you and your family may be closer to passing traffic than you bargained for.

The same applies to the kids careening around the camp park on their scooter and bicycles. If they take a tumble on a turn, it’s far more likely they’ll end up in your campsite on the outside bend.

In Feng Shui, the movement of the wind is called 'the moving stream' and it has consequences. It can be harnessed, blocked or allowed to flow. Connected to the concepts of Yin and Yang, the aim is to create balance.

When you’re out camping, it’s important to assess the wind. It helps you to assess where your neighbours’ campfire smoke is going to blow, and whether the dust of the track is likely to drift into your camp. It will also help you understand whether your own camp smoke is likely to choke your travel party. And it will tell you whether you’re downwind from nearby drop toilets or septic tanks.

Lots of folks like circling (or boxing) their rigs like they were making a corral worthy of John Wayne. We’ve all seen it. Campers cheek-by-jowl with each other, with three or more vans in the shape of a ‘U’ or wagon wheel. While this configuration may make everyone feel cosy at night, it simply funnels and traps the wind. So, it’s a great way to create stifling still air around camp or mini-tornados shredding annexes and awnings if the wind gets-up.

A better approach is to break wind (no, not like that) by placing your tow-tug at right angles to your camper and the prevailing winds. This will help keep the cards on the table and will help ensure that the smoke from the fire goes straight-up instead of spreading cinders downwind.