The Land Rover Discovery is a breath of fresh English air in a category long dominated by hard-hauling Japanese heavyweights like the Toyota LandCruiser and Nissan Patrol. Given it seems something of a Johnny Come Lately against the likes of the aforementioned pair, it’s hard to believe the Discovery has been with us now for three decades.

Major upgrades within each of the first two generations mean this all-new third generation model is commonly referred to as the Discovery Five. The ‘Disco Five’ arrived here in 2017, introducing a number of significant firsts, not least of which was the move away from body-on-frame to a unibody chassis design, and the adoption of aluminium chassis and body panels. Land Rover claims the changes increased the new model’s torsional rigidity and reduced vehicle weight by a staggering 480kg, both important considerations when towing.

There were other changes too, including the adoption of an even more capable version of its sophisticated computer-controlled 4x4 system, dubbed Terrain Response 2. The system can be set to fully automatic or controlled via a dial on the centre console, with a total of five different modes to cover Auto, Grass/Gravel/Snow, Mud, Sand and Rock Crawl. 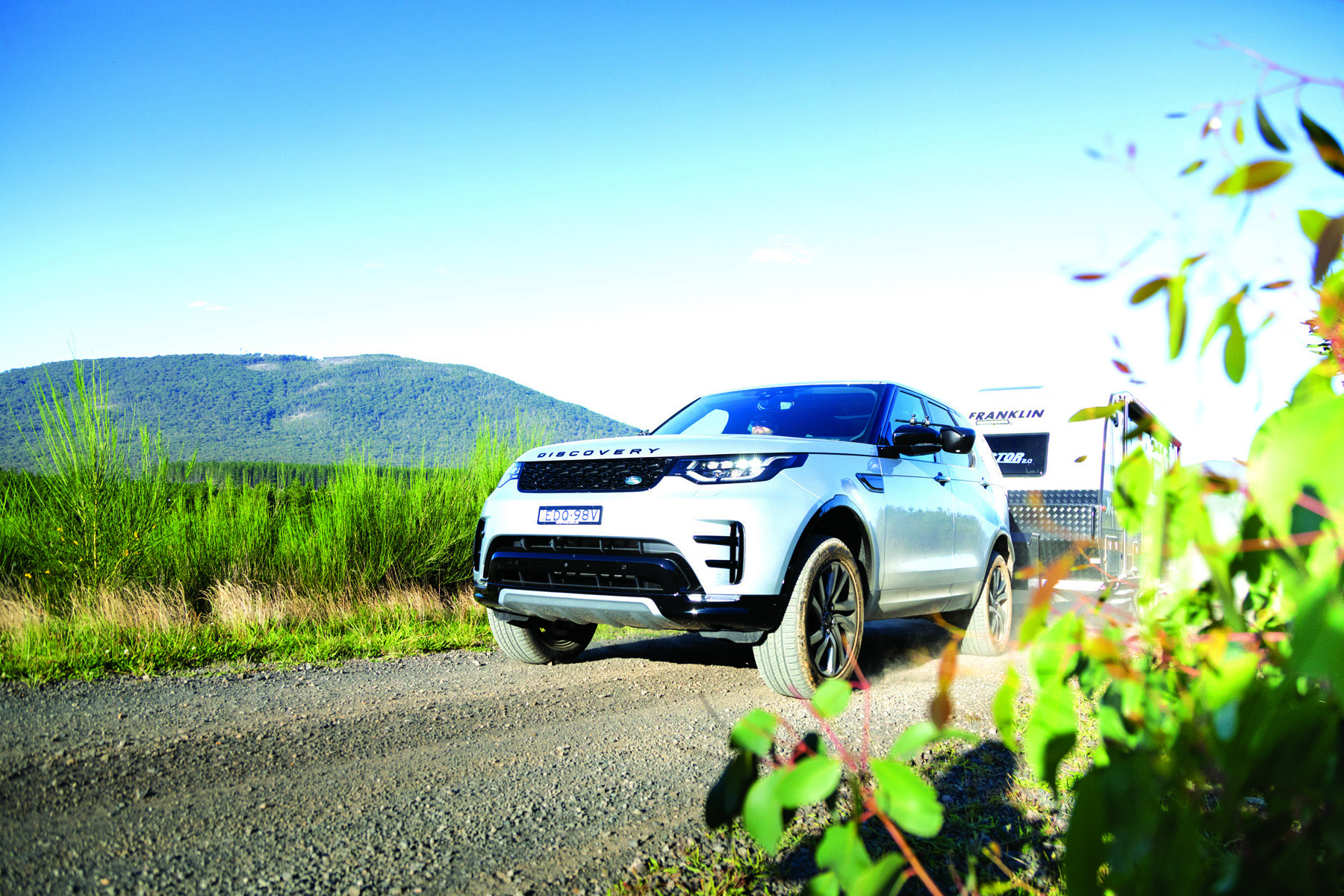 But perhaps the most controversial and readily apparent change was the move away from the trademark boxy, angular design to a softer and more rounded shape. It’s fair to say the new look has been somewhat polarising but, as the saying goes, ‘don’t judge a book by its cover’, because this new lozenge-shaped model is the most capable and sophisticated Discovery yet.

The all-new Disco arrived with a choice of three engines — a 3.0L V6 turbodiesel, and two different four-cylinder turbodiesels, the Td4 and Sd4. The larger capacity Td6 engine was always going to be the pick for anyone interested in towing but the significant price differential between the four- and the six-cylinder meant prospective buyers needed to take a deep breath before plunging in.

Land Rover addressed some of these concerns in 2018 by dropping one of the four-cylinders (the Td4) and the Td6 V6 and introducing a new diesel that retained the 3.0L capacity and V6 configuration but added a second turbo to boost power and torque. The new engine’s 225kW and 700Nm outputs represent a decent upgrade over the original 190kW/600Nm and mark it as being far more capable of hauling the Disco’s 3500kg braked tow capacity.

By way of comparison, the epic 4.5L turbodiesel V8 beneath the snout of the 200 Series LandCruiser makes 195kW and 650Nm, suggesting that Land Rover’s engineers have done a bang-up job in extracting such competitive power and torque from their engine’s considerably smaller capacity.

The new V6 is a remarkably smooth and responsive unit, thanks in large part to its sophisticated turbocharging system. It’s technically a ‘sequential-parallel bi-turbo’, as opposed to a twin turbo and features a large variable geometry turbo that does most of the heavy lifting, but which is backed up by a smaller fixed-geometry turbo. Working in tandem, the combination delivers smooth and lag-free throttle response that will have you wondering if it’s really a diesel at all.

The engine mates to a slick-shifting and impressively intuitive eight-speed ZF automatic, with drive channelled to all four wheels via the standard full-time 4x4 system. The fact the engine makes its peak 700Nm of torque at a low 1500rpm means it’s rarely found wanting for grunt when presented with hills or other challenges.

Out on the road the supple, air-sprung, fully independent suspension does a magnificent job of ironing out lumps and bumps, making the Discovery one of the best riding full-size 4x4s short of a Range Rover. It also handles with real precision for such a big beast, the body remaining impressively flat when cornering, the combination of all-wheel drive and strong tyre grip inspiring real confidence in its ability to get around bends at a clip.

Even without the extras the interior is nicely finished and detailed, with luxury touches such as leather seats with contrast stitching and 12-way electric adjustment, a multi-function (manually adjusted) leather steering wheel, ambient interior lighting, two-zone climate control, and 60:40 load through second row seats that slide and recline.

On that last point, while not everyone will be a fan of the Discovery’s new look, there’s no denying that its designers have managed to free up plenty of usable space inside its cavernous interior.

There’s loads of room up front for driver and passenger, who each get plush, armchair-style seats, while the generous rear seat will easily accommodate three adults.

The third row is also decently accommodating although, as in most seven seaters, it’s better for kids than adults. Boot space is excellent, too, with 1231L of space available in the five-seat configuration, or 258L with the third row in use. Dropping the second and third rows frees up a yawning 2068L.

On the technology front, the interior features a 10in high-definition touchscreen which incorporates a satnav with excellent offroad mapping capability, plus Digital Audio Broadcast (DAB) Radio, Android Auto and Apple CarPlay capability. Icing the cake is a ripper 380W 10-speaker Meridian sound system (with subwoofer), as well as Plug and Play USB ports, which act as additional storage for movies and music. There are also multiple charging points for our now ubiquitous devices.

Despite its competitive 3500kg rated towing capacity, the Discovery is significantly lighter than rivals like the ‘Cruiser and Patrol, thanks to its aluminium monocoque construction.

This model’s 2311kg kerb mass is a good 500kg lighter than a Y62 Patrol, and 300kg below the lightest LandCruiser 200 Series variant, which bodes well for fuel economy, acceleration and payload.

When it came time to hitch up, we immediately appreciated the remarkably crisp, clear images displayed on the Disco’s touchscreen and the 360-degree parking aid view. Likewise, the air suspension, which not only assists with getting in and out of the spacious and comfortable cabin but has the added advantage of being able to raise and lower vehicle ride height when hitching up to a caravan. Selecting the lowest setting allowed us to reverse in under the X-Factor’s hitch, while the higher level then brought the car up on to the hitch, minimising the need to work up a sweat on the jockey wheel.

The air suspension also proved handy later in the test when negotiating some steep kerbs, allowing the driver to raise the vehicle height and hence the rear of the van to prevent it dragging over obstacles.

Out on the road the high seating position and commanding vision out of the Disco’s airy cabin provides a real sense of confidence for the driver. The seats offer excellent shape and support and there’s good elbow support from the centre console and armrests. The large, almost over-sized steering wheel controls speed-dependent, electrically-assisted power steering that can feel a little on the light side even when unladen, but which is nonetheless impressively quick and accurate in its responses to inputs.

Our tow route took us on a 200km loop from North Melbourne to Macedon and back, during which time the cabin remained remarkably well-insulated from road, wind and engine noise, even when the V6 was asked to work that bit harder with a big load out back. The same instant urge and petrol-like smoothness we noted when unladen were evident during the tow test, as was the smooth-shifting refinement of the automatic gearbox, which shuffled seamlessly up and down the ratios to find the right gear for the conditions. It’s arguably one of the smoothest drivetrain combinations we’ve towed with.

On the all-important fuel consumption front, the slow and steady stuff about town pushed consumption to a wallet punishing 21L/100km, but freeway cruising at 100km/h brought things back to a more respectable 15L/100km, for an overall average of 17.5L/100km. It has to be said we weren’t driving with economy in mind, though, and did find that setting cruise to 80km/h for a short stint dropped consumption to 12L/100km, which is outstanding given the size of the van in tow.

In terms of touring range, using our 17.5L/100km average and the Disco’s 85L fuel tank, the combination should be good for a range between fills of 450km with a bit of buffer. That’s still on the skinny side for long distance touring, but if you drop back to our suggested 80km/h highway speed this extends to a more acceptable 670km with buffer.

Some steep gravel sections also allowed an appreciation of the vehicle’s standard hill descent control, which provided valuable peace of mind when we found ourselves on a tricky piece of steep gravel road.

When measured against rivals like the LandCruiser and Patrol, the Discovery stands out for its superb refinement and sophistication. It really is a beautifully comfortable and refined machine to drive, providing the sort of cosseting ride comfort and isolation from the outside world that was formerly the domain of the Range Rover. That it does this while still having such incredible breadth of capability is really at the heart of the Discovery’s appeal. Here is a 4x4 that can tackle the most serious of offroad conditions, haul its rated 3500kg load with aplomb, and deposit you at the theatre or the kids at school, all in quiet comfort and civility.

But there are provisos, including the fact that some of the optional extras seem pretty steep when considering the Landmark’s not inconsiderable purchase price. Personally, I find the need to pay thousands more to get a third row of seats and keyless entry a bit rich. Land Rover’s three year/100,000km warranty is also looking a bit skinny, with even the likes of Mercedes-Benz recently moving to a more competitive five-year offering.

The Disco 5 is, of course, also incredibly technically sophisticated and the Land Rover brand can’t demonstrate the same reputation for rugged reliability that Toyota has established with the LandCruiser. As one colleague said to me while researching this piece: “I've seen a higher proportion of Land Rovers on flatbeds than LandCruiser 200 Series.” Such feedback is anecdotal of course and we’ve met plenty of Land Rover owners who swear by them and have had few or no issues. But what can’t be denied is that Land Rover does not have the dealership footprint of Toyota, which is an important consideration for anyone considering heading far from home on a Lap of the Map.

However, if you can get over these mental hurdles, there is no doubt the Discovery stands apart from anything else on the road.

It is a superbly refined and thoroughly unique offering in Australia's 4x4 market space, and one that proved itself every bit as a competent and capable with a load out back as it is when unladen.