Malcolm Street — 2 April 2020
Tare, GVM, GTM, ATM and GCM, all cause confusion in the RV world, but that shouldn't be so

There are many weight related terms used in the Recreational Vehicle (RV) world. Some are specified by manufacturers — either tow vehicle, caravan or motorhome — and some are actual weights. Because there are so many specifications, it’s no wonder buyers and owners are confused. Much rides on understanding and getting RV weight right, because it affects safety and keeps you inside the law when travelling.

A rating figure, this refers to the maximum legal total loaded mass of a trailer, be it box, caravan or fifth wheeler, and is specified by the trailer, chassis or caravan manufacturer (note that it includes the Tow Ball Mass, or TBM). In short it is the weight of the van on a weighbridge, resting on the wheels and jockey wheel. It should be found on a nameplate, usually in the front boot or tunnel storage of a caravan. This nameplate should have a number of other details, including the date of manufacture and some of the items listed below. 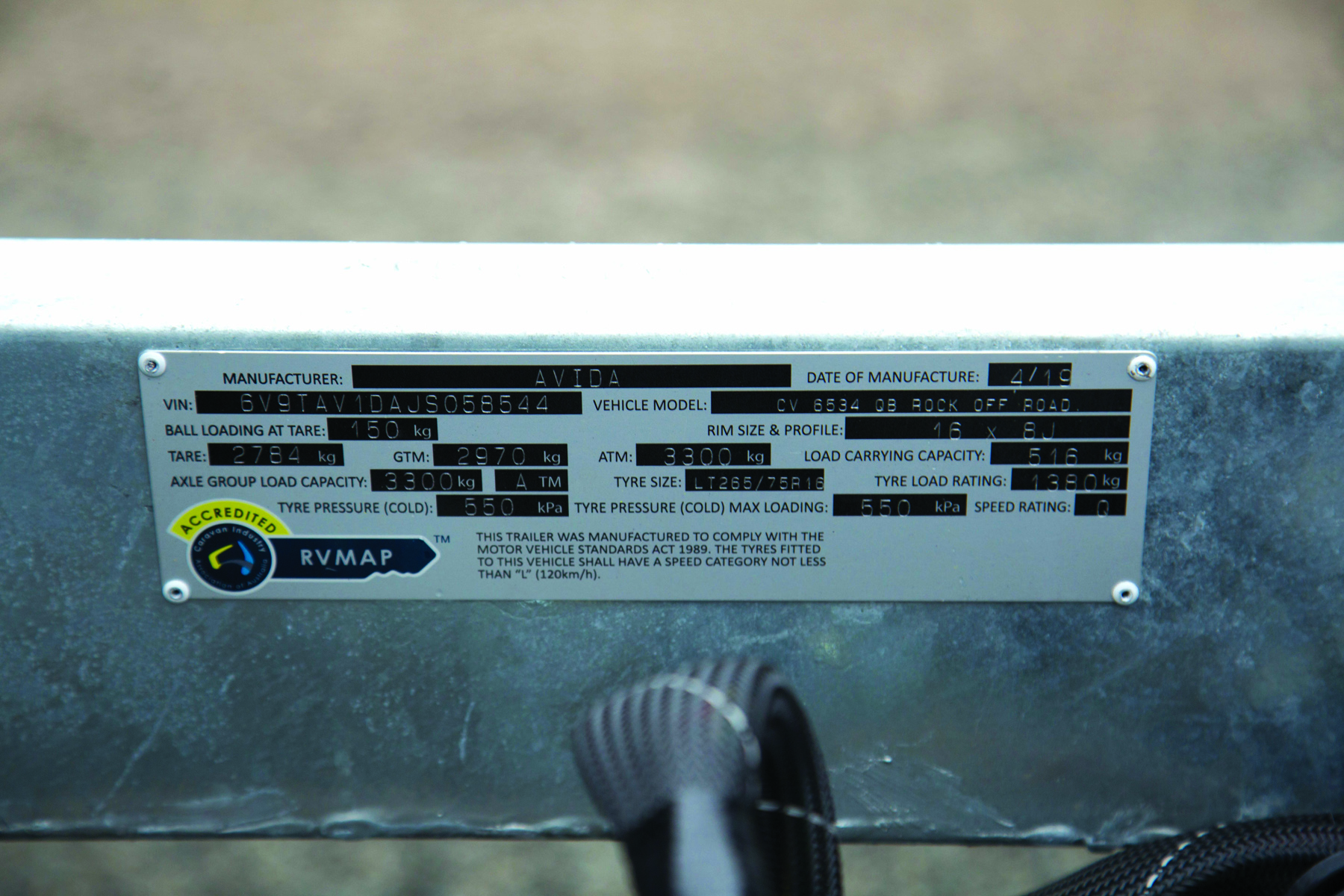 Also specified by the manufacturer, this is the legal total weight that can be supported by the wheels of a trailer and does not include the weight on the jockey wheel. Generally speaking this is a figure that the RV manufacturers need to worry about, particularly caravans, because it’s best for towing reasons if the heavy items (like the fridge) are over or near the axles.

Often referred to as Tare, it is the unladen weight of a caravan, with water tanks and gas cylinders empty. Note that it should include all extra fittings that are attached to the van. Tare mass is something that often causes problems between dealers and new owners. The Tare mass stamped on the nameplate is generally as the RV leaves the factory but if the dealer happens to add any extras at sale time, they too should be included in the Tare figure. The ideal would be for the dealer to provide a weighbridge certificate and even a new plate just prior to sale so there are no misunderstandings. That also applies if you, the owner, add a few items like an extra battery, solar panels and generator. Anything like that, considered to be fixed items, will change the Tare mass.

The maximum load a caravan can carry is worked out by subtracting the Tare from the ATM, and up until a few years ago had been 300kg for a single axle caravan and 400kg for a tandem. However, many manufacturers specify something much higher these days. Something that occasionally gets forgotten is that water has serious weight, so if a van has two 90 litre tanks and, say, a Suburban hot water heater, that’s 200kg of your available payload gone, before you’ve added anything else.

Otherwise referred to as tow ball weight or just ball weight, it’s the weight imposed on the tow vehicle’s tow ball by the coupling.

Specified by the tow vehicle manufacturer for trailer towing (not necessarily a fifth wheeler), it should not be exceeded. A point that can cause confusion here is that it’s for the actual weight of the trailer/caravan, not the rated ATM. For instance, it is quite legal to have a tow vehicle with a rating of 3000kg and a caravan with a rated ATM of 3200kg as long as the actual loaded weight of the caravan is less than 3000kg.

Specified by the tow vehicle manufacturer, it's often 10 per cent of the maximum tow rating but not always. Unhelpfully, some tow vehicle manufacturers have a sliding scale, which doesn’t work quite the way you expect. As the loaded weight of a caravan increases, the maximum tow ball mass decreases. This can be quite a headache to determine, so you need to take care when loading the van or trailer.

It’s the latter figure that’s trips people up and is important to understand. The problem is that if a caravan fully loaded weighs in at 3500kg, then subtracting that from the 6000kg GCM gives a figure of 2500kg for the maximum loaded weight of the tow vehicle.

Just before anyone puts pen to paper, I know I have not mentioned tow ball mass — it doesn’t disappear, it’s either included in the caravan figure (which I have done in my example) or as part of the tow vehicle payload.

If all the maths on this is a bit confusing and you happen to own a ute with a 3500kg tow rating and a GCM of 6000kg then depending on the load carried by the ute I’d reckon a maximum towed weight of somewhere between 3000 and 3200kg. I know that sounds a bit conservative but personally I’d rather have a couple of hundred kilos up my sleeve than have a vehicle working close to its limits, which is hard on both the tow vehicle and driver.

The GVM for tow vehicles and motorhomes is specified by the vehicle manufacturer and is the maximum legal loaded mass of the vehicle. Some aftermarket specialists do offer a GVM upgrade but the rules on this vary from state to state, so caveat emptor depending on where you live.

This is measured slightly different to the Tare mass for a caravan — it may also be known as mass in running order or unladen mass. It is the vehicle with all fluid (oil, brake and water) reservoirs filled and the fuel tank filled to 10 per cent capacity.

Something not to be forgotten in all the alphabet soup and maths is the way a van is loaded.  The ideal is to get a nearly balanced van with more weight towards the front, but not in a way that exceeds the maximum TBM.

The water tanks are a consideration here. Where there are two water tanks, most manufacturers locate them either side of the suspension mounts or, if there is room, above the axles. Even though extra weight is being added, it still balances out.

Some caravans have a rear storage area, sometimes quite large. Unless there is an exceptionally heavy load up front, then it’s probably best if only light weight items are kept there. One of the worst towing conditions is having a heavy weight in the rear of the caravan which causes the van to swing around with the slightest touch of the steering wheel; the tail wags the dog and it can be very difficult to control the caravan.

Various state authorities seem to be taking more interest in towing weights and generally don’t regard ignorance as an excuse. If your RV is new or if you have not checked for a number of years, a visit to a public weighbridge with your fully loaded tow vehicle and caravan/fifth wheeler or motorhome is a good idea. Both the TBM and overall weight of the caravan can be checked. It’s possible you might get a nasty surprise and have to shed some weight. On the other hand, you may get a reassurance that your rig is legal. Better to be safe than sorry I reckon because as our roads become increasingly busy, it’s imperative to have a safe towing combination.