The transition from sage covered flat land to sheer rugged pine-clad mountains is sudden and abrupt; like a calm sea washing against precipitous cliffs; as suddenly as if a knife had been slashed across the ancient forming landscape — mountains one side; level land the other. We were in the Grand Teton National Park in Wyoming, spell bound by the ever-changing play of light and cloud across the great bastions of rock that reared up from the waters of the lake that lay just below our feet.

It was a magical view and one our eyes were constantly drawn back to. Grand Teton National Park is part of the Rocky Mountains, the vast stretch of high country and jagged snow-capped peaks that stretch for over 4800km from New Mexico in the south-west of the USA, to the north of British Columbia in Canada.

For Australians living in a country where our mountains are not much more than weathered down stumps of once grand summits, the Rockies are something outlandish and extraordinary to behold. 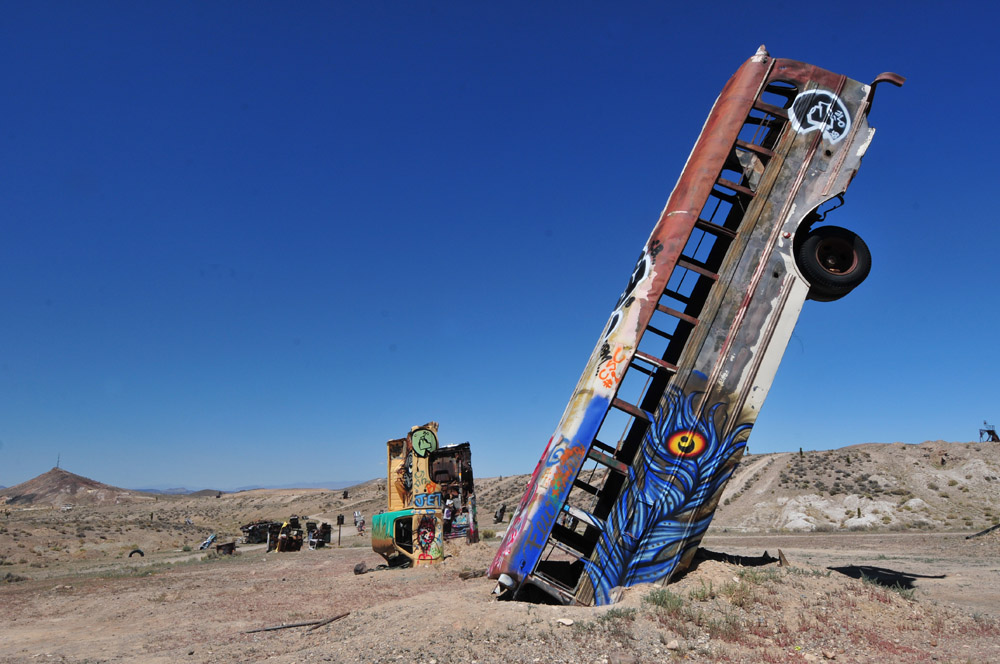 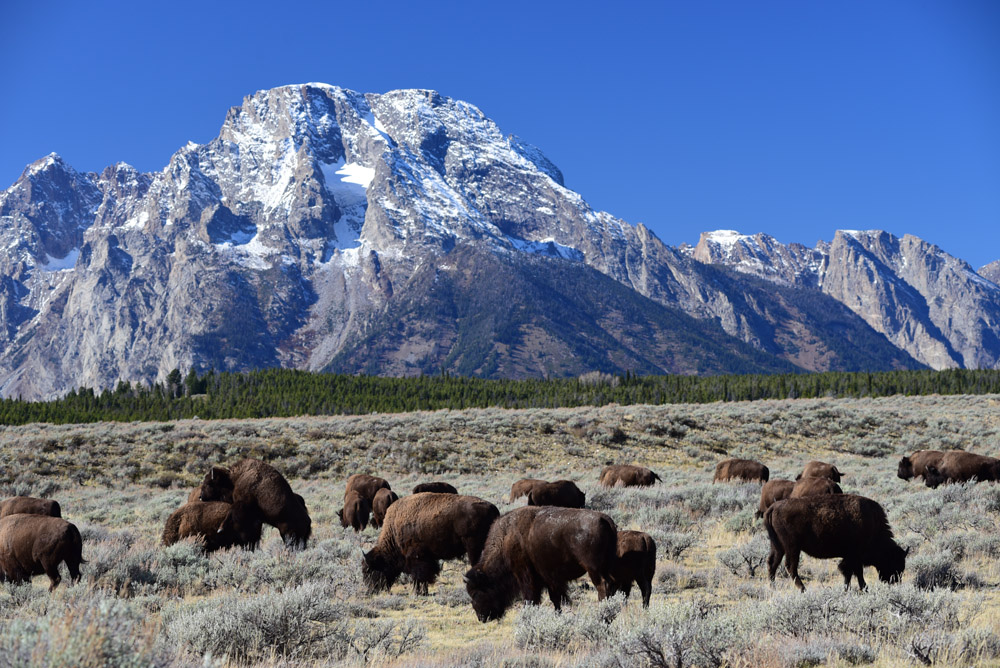 Our latest trip had seen us pick up our Dodge and slide-on Four Wheel camper and meet up with Aussie friends who had hired a small RV for their first road trip in the United States. From northern Arizona we started with a visit to the Grand Canyon sprinkled with snow, even though it was the beginning of May. That is one of the first things you learn when travelling in North America; summer often comes late, especially in the higher altitudes, or in the northern states of the US, or over the border in Canada.

A couple of examples to emphasise the situation; the north rim of the Grand Canyon, at over 2500m, does not open to the public until the middle of May, sometimes later. Further north in Montana the Bear Tooth Highway, considered by many to be the most beautiful drive in the States, only opens in June.

The first year we went through there in the middle of June the road had just opened the day before and the snow banks on each side were over five metres high. Our love affair with North America started in 2011, when we crossed from Central America into Mexico, spending most of the last two months of our around-the-world sojourn in Baja California — the long peninsula of land that stretches south from the USA border to Cabo San Lucas, 1600km south. Think north-west Cape in WA and you get an idea — a desert like peninsula fringed on one side by the blue waters of the Pacific, and on the other by the placid warm waters of the Sea of Cortez. The fishing and diving here are unforgettable, as is the driving and the camping on remote white sandy beaches lapped by calm, turquoise coloured seas.

Over the following years we drove through western Canada to northern Alaska and then, in winter, drove the ice roads across the Arctic Ocean in the fabled Northwest Territories. Heading south we wandered through Texas to the Rio Grande and back into Mexico following the Tequila Trail south, before heading north on the Camino Real de Tierra Adentro, which was the first route traced by the Spaniards in the Americas, running between Mexico City and Sante Fe in New Mexico.

We got to New York too, a week or so after leaving Washington DC, going there via the Civil War battlefield of Gettysburg (man, the Yanks do their historic monuments exceedingly well), but we could have easily bypassed the ‘Big Apple’, where we spent a week. Glad to get away from the big smoke we headed to Acadia National Park and then on to lesser-known and less populated fields including West Quoddy Point Lighthouse — the most easterly point of the USA. It was just a veritable hop, step and a jump to Canada from there and we headed to Nova Scotia with its gigantic tides in the Bay of Fundy (even eclipsing Derby’s mammoth water movements), and pretty Prince Edward Island where some of the biggest tuna on the planet can be caught on rod and line, and released under strict environmental controls. We caught the ferry to Newfoundland and headed to the Cape Spear National Historic Site ­— the most easterly point of the North American continent — the roads remaining blacktop all the way. Swinging back west we stopped for a few days along the coast of Gros Morne NP and its sheer sided Western Brook Pond, before discovering, on the northern tip of Newfoundland L’Anse aux Meadows, the only authenticated Viking village in the whole continent. With yet another ferry ride across the Gulf of St Lawrence we landed in Labrador taking a great arc of gravel road to Happy Valley-Goose Bay before we swung south through the vast province of Quebec to the historic capital on the Saint Lawrence River. The old walled town of Quebec is the only such fortified city in all of North America.

Heading ever westward we passed over the great shoulder of Lake Superior and crossed the border back into the USA before heading through Theodore Roosevelt National Park, reveling in being back in ‘The West’, finding some dirt roads and rougher tracks to explore, discovering remote, or at least remoter campsites and enjoying the wildlife — bison, pronghorn antelope, mule deer and big-horn sheep, amongst others. Pushing ever onwards towards the setting sun we found ourselves amongst the high peaks of the Rockies once more, with the fabulous Glacier National Park to enjoy, then the Cascade Mountains with its impressive Mt Rainer. Finally we arrived at the most westerly point of the Lower 48 states — the rocky, heavily indented coast of Cape Flattery, where we turned south through the backwoods of Oregon and magical Idaho, camping on the mighty Snake River and well off-the-beaten-track on the edge of the McGraw Creek Wilderness Area. Crossing into Wyoming we headed for the Grand Teton NP and to those rugged peaks and flat, sage coloured plains that butt right up to the mountains. Driving some of the back roads here — once again along the edge of the upper reaches of the Snake River — we came across large herds of grazing bison, wandering groups of elk and small mobs of deer, and just one or two other vehicles. All with a backdrop of impressive mountains. It was pure magic!

This year with our friends in tow we spent three months touring the ‘best of the West’ as we wandered around this incredible region, revisiting many unforgettable places and finding new ones to rave about. Finally, after two previous tries, we got to drive across and through the Rocky Mountain NP — just. The road closed behind us because of a late season snow fall, and the foggy weather ensured that we’d need to come back to see the views. We then wandered across to the Black Hills of South Dakota, surely one of the most delightful regions of the USA with its carved mountains of the four Presidents and the almost unbelievable monument to Chief Crazy Horse being blasted and hewn out of a thousand foot high mountain. You can walk out on his arm two days a year — it’s an unforgettable experience. Then we swung west again taking in the battle of the Little Big Horn National Historic Site and the memorable and exceptional Yellowstone NP before heading to the coast and wandering down through the giant redwoods of southern Oregon and northern California. These trees, the tallest on earth, leave you feeling humble and insignificant, while inland the mighty sequoias (the biggest trees in volume on the planet) will leave you gobsmacked.

Somewhere in amongst those travels we snorkelled with the fish and coral in Pennekamp State Park in Florida, sung along at the Grand Ole Opry in Nashville, fired a Gatling machine gun in Cody, Wyoming (it surely must have the best museum of the American West in all of the USA), cruised long sections of Route 66 across the country, watched a half dozen grizzly bears up close and personal catching salmon in the waterfalls of Katmai NP, stood amongst the gunsmoke of a recreated gunfight at the OK Corral; had fun rock crawling in the red rock country of Moab, Utah, stood on the southern most point of the US mainland at Key West, been wowed with the old cars at the California Automobile Museum in Sacramento, and enjoyed the Eskimo Olympics in Fairbanks, Alaska, so much so we went back for a second time. And after all that, we haven’t even touched the surface of things to do and places to see.

So the moral of the story? No matter what rocks your boat a road trip in the USA will never be forgotten, and with an RV, the whole continent awaits!