The Tasman Peninsula is best known for its convict-era heritage and the popular Port Arthur Historic Site, but there’s more to this place than first meets the eye. Unbeatable bushwalks, towering seas cliffs, peaceful coastal camps and plenty of kooky charm make this a top spot to add to any Tassie touring itinerary.

It’s only 80km—just over an hour’s drive—from Hobart to Eaglehawk Neck, where your Tasman Peninsula experience begins proper, but allow time to fully explore once you arrive. A day trip just doesn’t do it justice, so hitch up the van, strap yourself in and point your tow tug toward this fascinating south-eastern corner of the State. 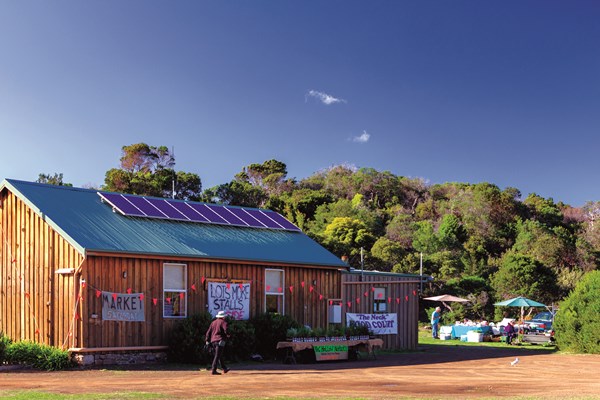 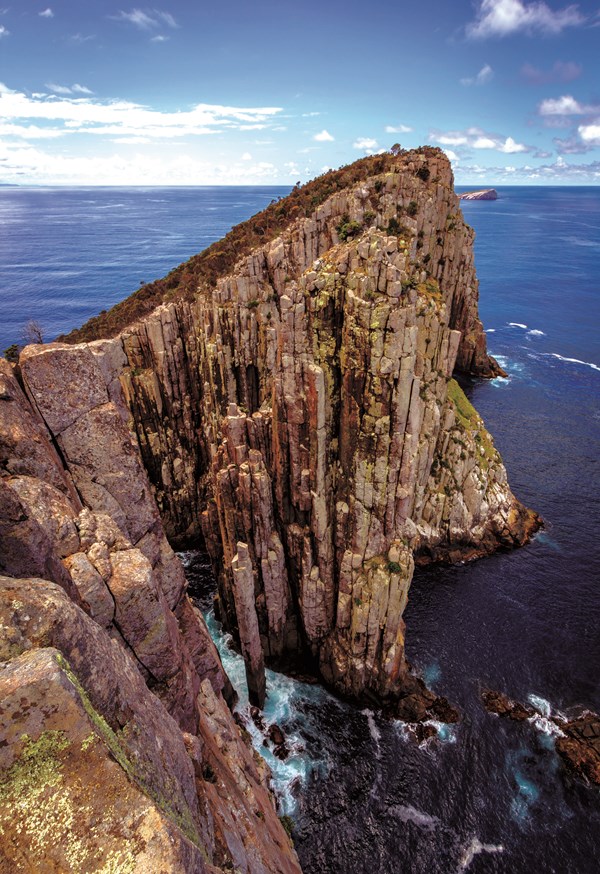 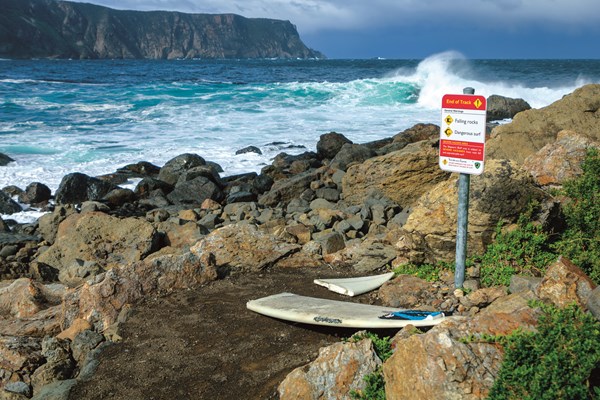 NO ESCAPING THE NECK

Convicts arrived on the Tasman Peninsula in the 1830s and scattered relics remain from this period, the first of which you’ll come across as you descend from the moody hills of the Forestier Peninsula on to Eaglehawk Neck—the skinny isthmus that divides the two peninsulas.

During convict times, the Neck acted as a natural barrier for potential escapees and a military station was established here in 1831. The Neck was once home to the infamous dogline—a line of fierce guard dogs placed at intervals across the isthmus and on platforms in the shallow bay, to alert officers to any potential absconders.

You can learn more with a visit to the 1832 Officers’ Quarters before wandering down to the site of the original dogline, now marked by a bronze statue of a ferocious-looking dog. If your interest is piqued, follow the self-drive convict trail around the peninsula to a range of excellent sites, including two that are World Heritage-listed—Port Arthur and the old Coal Mines. These must-visit sites provide a fascinating glimpse into convict-era Tasmania, told through the stories of numerous individuals who did their time here.

Eaglehawk Neck is also home to the Tessellated Pavement, where the intertidal rock platform has an amazing, grid-like appearance. Best viewed at lower tides when the rock platform is more exposed, it’s a short walk to the lookout above the rocks and then down to the waters’ edge.

HOW DO YOU DOO?

One of the Tasman Peninsula’s quirkiest communities is Doo Town. This collection of fishing shacks has gained notoriety for its eclectic naming convention, with the shacks proudly boasting names like Doo-Drop-Inn, Make Doo, Dr Doolittle, Doodle Doo, Wattle-I-Doo and Doo-N-Time—you get the gist!

After you’ve had a giggle and stopped to snap a few shots of your favourites, you’ll find yourself perfectly placed to explore the nearby Blowhole, the Tasman Arch and the ominously-named Devils Kitchen in Tasman National Park. Here, you can gaze off the top of the cliffs at what were once sea caves or tunnels, eroded by the waves into deep chasms and arches, exposed from the top by the collapse of the cave roofs. Down below, the pounding ocean sends waves washing over the rock platforms, the process of erosion continuing with each sweep of water.

Each is easily viewed from their respective car parks, but you can also choose to follow the 1.7km clifftop walking trail to Waterfall Bay, offering far-reaching views of the Tasman Sea and down the coastline to Cape Hauy. After rain, a waterfall can be seen plummeting from the cliffs into the sea from the lookout across Waterfall Bay.

It’s here that you really begin to understand where the peninsula gets its reputation for its rugged good looks and, in fact, this coastline boasts some of the tallest sea cliffs in the country.

FROM CAPE TO CAPE

The best way to really experience the jaw-dropping coastline is on one of the peninsula’s spectacular day walks or, better still, the renowned Three Capes Track. But even if you don’t have time to squeeze in this four-day wilderness walking adventure, you can still get a real sense of the coastline on a shorter walk and there are several great options.

Leaving from the Fortescue Bay campground, the Cape Hauy walk takes about four hours (8.8km return). I won’t lie, there are a lot of steps and a lot of uphill climbing to be done, but the views along the track and from the lookout at the tip of the cape are well worth it. The track is also excellent, having been upgraded to a dry boot standard, and is part of the last day of the Three Capes Track. Gazing off the end of the cape you can admire the lofty dolerite sea stacks—the Totem Pole and the Candlestick—and marvel at those people brave (or crazy) enough to climb them.

Not far past Port Arthur, you’ll find the turn-off to Remarkable Caves—one to add to your must-visit list. It’s just a short walk down to the sea cave’s viewing platform, where you can peer through the hole in the cliff face out to sea. The cave fills with water at higher tides and empties completely when the tide is low. If the conditions are right you can stand at the nearby lookout and watch surfers tackle the turquoise waves, with spectacular Cape Raoul looming in the distance.

If you like to keep your walking options open, take the Stormlea Road to the very end, where you can choose from the 14km Cape Raoul walk or the 8km track to the notoriously daunting wave at Shipstern Bluff. Both walks depart from the same trackhead and if you don’t want to commit to the full distance, you can choose to walk only to their respective lookouts. Both tracks provide world-class clifftop scenery, but if there’s strong southerly winds you’ll want to hold on to your hat, as parts of the tracks are quite exposed.

SLICE OF THE LIFE

Before you retire to your van for the evening, consider following the looping road through the tiny village of Koonya to appreciate the handsome historic buildings, or stop in at Roaring Beach for a splash in the surf. Away from the dramatic coastline and towering rock formations, you’ll find rolling hills, classic rural scenery, protected bays, white sand beaches, pear orchards, winding roads and sleepy townships.

As you mosey your way back towards Hobart, you’ll once again cross Eaglehawk Neck—the only access road to this secluded peninsula. If you didn’t stop to check it out on the way in, make sure you detour to the Pirates Bay Lookout at the top of the hill, where you can get one last look back down the jagged coastline of the peninsula, picking out the capes you’ve clambered over and the bays you’ve swum in. There’s no doubt you’ll be planning your return trip.

From Hobart it’s around 80km—just over an hour’s drive—to Eaglehawk Neck.

Exploring the winding roads of the Tasman Peninsula takes time, so while it can be done on a day trip from Hobart, it’s best to allow a couple of days if you really want to scratch below the surface.

Many of the peninsula’s spectacular natural attractions are in Tasman National Park.

Low-cost camping with limited facilities is available at tranquil Lime Bay in the Lime Bay State Reserve on the northern tip of the peninsula. This is a great spot for self-sufficient campers, with easy access to the shallow turquoise waters of the bay—ideal for kids. The campground operates on a first-in, first-served basis with payment made on site.

There’s also a national park campground at Fortescue Bay, nestled among the trees behind a sheltered bay at the end of a 12km dirt road, with a number of sites suitable for RVs. Bookings are essential and can be made by calling the caretakers on (03) 6250 2433.

WHERE TO EAT AND WHAT TO DRINK

While the dining and grocery options are fairly limited, you won’t starve during your stay!

On route to the peninsula, visit the Dunalley Fish Market for a feed of fresh seafood, or for a real Tassie delicacy stop at the Murdunna Roadhouse for a scallop pie. The above-mentioned treats are also available at the Doo-lishus food van at the Blowhole car park at Eaglehawk Neck, along with delicious berries and ice cream.

If you need a caffeine hit, look for Cubed Espresso at the Pirates Bay Lookout. While they’re not always there, hopefully you’ll be lucky enough to find the cute, refurbished 1950s caravan where you can pick up a locally-roasted coffee—best enjoyed while surveying the stunning view.

If you’re lucky enough to visit on the second Saturday of the month when the Eaglehawk Neck market is on, you’ll be able to stock up on enough locally-made jams, relishes, pickled onions and cakes to keep you happy during your stay.

You can also enjoy lunch at Port Arthur Lavender, where you can wander the sweetly-scented fields in season, before grabbing a seat at the cafe overlooking Long Bay.