We decided Wallaman Falls, the highest single drop waterfall in the country, deserved another look. The last time we visited, it was on about 25km of dirt road and in a new Triumph TR7 sports car. It was a fun trip roaring up that dirt road: we were much younger then.

We usually bypass Ingham on our way north, but other travellers had suggested staying at the back of the Ashton Hotel, about 23km north-west of Ingham, and about halfway between the Broadwater National Park (NP) and the falls. It’s one of a group of country pubs that allows camping in their grounds.

The first stop was at the Tyto Wetlands and visitor information centre just as you come into Ingham from the south. There’s an overnight camping area bordering the wetlands, but you have to be completely self-contained. We wandered around the wetlands on the boardwalk, spotting several species of birds before climbing the tower to get some pics and video. The tower gives a great view over the whole area. Even though the cafe was shut, it is well worth visiting the centre. 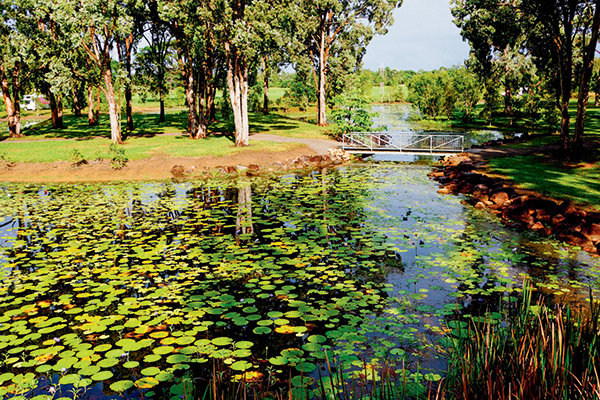 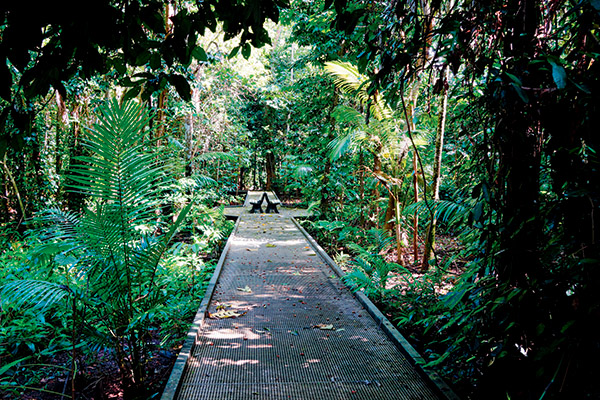 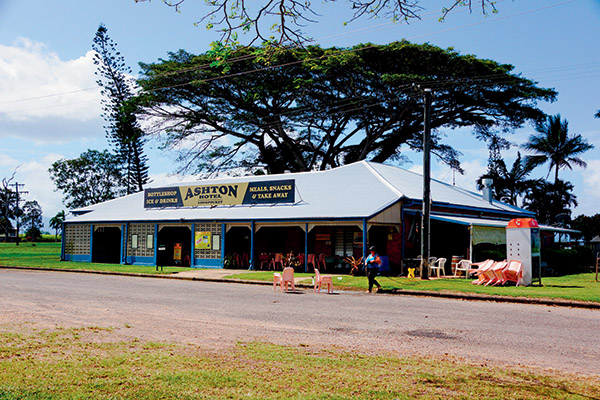 While in town, visit the mosaic murals in the main street, opposite Coles in the laneway next to Westpac. These tell the history of Ingham in very artistically impressive mosaic wall murals plus story-telling bollards.

We contacted Cathy Spoelder, publican at the Ashton Hotel, to confirm directions to the pub. After visiting the wetlands, drive 23km north-west on the sealed road and arrive at the pub. We settled into the best spot, next to the palms at the rear of the block behind the pub. It had been raining, the cane had been cut, and the view out to the hills with mist rising was magical. The huge rain tree over-hanging the pub is quite an attraction on its own, too.

As the day went on, the camping area started to fill with a group of motorhome club members on their way to a muster.

There is no fee to camp behind the pub and there’s an outside toilet which is open all night. Hot showers are available during pub opening hours for a gold coin donation. There’s no power, but generators are allowed at specified times.

On our second night we were fortunate to meet and have a drink with 87-year-old Gus Lino (definitely pronounced ‘Leeno’ and not like the flooring). His grandparents had the lease on the original double-storey Ashton Hotel when it burnt down in 1942, and he fondly remembers time spent with them at the pub, and buying treats at the store that was next door. He was able to tell stories about the track built in 1863 from Cardwell to Broadwater. It was used by bullock wagons bringing in supplies from the port at Cardwell, which is only 17km from the pub as the crow flies.

Another interesting local is a descendant of Dan Sheahan who wrote the famous song ‘A Pub With No Beer’ and made famous by Slim Dusty, about one of the hotels in Ingham.

Hinchinbrook Day Tours to Blencoe Falls, Hinchinbrook and Mt Fox can be booked through the hotel. There are three access points to the Wallaman Falls Section of the Wet Tropics Great Walk in the area, but you will need to arrange drop-off and pick-ups.

The Ashton Hotel is a great place to base yourselves while visiting the area, and Cathy and partner Simon Thorogood are a very welcoming and helpful couple. Be sure to ask about Happy Hour evenings.

The State Forest is a 30-minute drive from the pub. At the time the 17km dirt road in was a bit rough after rain, but was being graded. It was a pleasant drive in through a pine forest. There are campgrounds with toilets, showers, barbecues, but dogs are not allowed. Only one camper was there when we called. About 10 years ago we camped there for a couple of days, and not much had changed.

The day-area has toilets, a large shelter shed and gas barbecues. There are several walks through the rainforest and a swimming hole in the river with a platform and ladder into the clear running water.

There’s a 200m walk in to see the famous Giant Fig Tree, which has recovered from being damaged in Cyclone Yasi. There’s a boardwalk around it now, to protect it from trampling of its roots. This national park is easy to access on a day visit: bring a picnic to enjoy in this very quiet and peaceful place, with only birdsong and running water to break the silence.