Hat Head National Park might be small in size but this coastal gem more than makes up for that with its stunning scenery, breathtaking views and fascinating history. Nestled along New South Wales’ spectacular coastline, the park boasts unspoilt sandy beaches, pockets of lush rainforest, the impressive Smoky Cape Lighthouse as well as the historic Trial Bay Gaol.

It was a beautiful spring morning when we made our way to the Smoky Cape campground at the northern end of the park and found a secluded spot among the littoral rainforest. Most of the sites are large, well-protected from the elements, and the price tag is reasonable – even for families. The sound of the waves is the only evidence of our proximity to the south Pacific Ocean, a dangerous stretch of coast that warranted the presence of a lighthouse in the late 1800s. 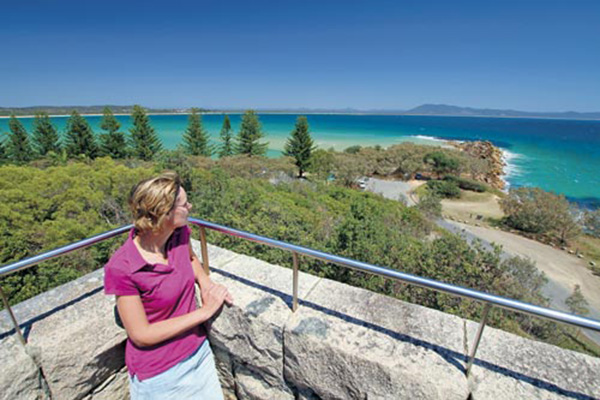 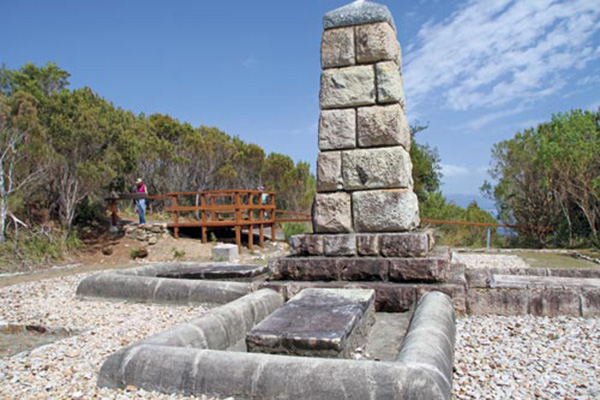 The kids discovered a narrow track that lead through the sand dunes to South Smoky Beach – a dazzling white expanse of sand where the kangaroos liked to venture out at dawn and dusk. To our left, the impressive Smoky Cape Lighthouse sits on a narrow granite headland, towering 140m above the sea, making it the state’s highest light. During World War II its strategic position was soon recognised, with the lighthouse used for military purposes.

CAMPING IN THE RAINFOREST

The next morning, we awoke to the cacophony of birds that make their home in this well-preserved area of coastal rainforest. We were all eager to see the lighthouse up-close so we jumped in the car and took a right onto Lighthouse Road. The sealed road winds its way up the steep headland, affording spectacular views of the coast and beyond.

The 6km road was built in 1889 in harsh and unforgiving conditions, eventually leading to the contractor William John Oaks’ death at the age of 45. Oaks’ two sons, Walter Frank (19) and Percy (17) undertook to finish the job and on April 29 1891, the lighthouse opening ceremony was held.

Shipping traffic was busy around northern New South Wales because of the natural wealth of the area. The Macleay River Valley was abundant in cedar, also known as red gold to the loggers, but the supply was nearly depleted by the time the lighthouse became operational. Yet, an astonishing number of at least 46 ships have been reported as lost, with only a few to have been found.

The climb to the lighthouse is a long and strenuous one; even the kids didn’t manage to run the whole way. The octagonal, two-storey, dazzling white building stands like a sentinel, protecting the surrounding coastal waters. The nearby head keeper’s and assistant keeper’s cottages have been fully restored and now serve as comfortable holiday accommodation.

The lookout is a great location to spot humpback and southern whales during their annual migration. The massive mammals head north in June-July to mate and give birth in the warmer Queensland waters, to return to sub-Antarctic feeding grounds with their calves in October-November.

It was difficult to pull ourselves away from the lookout, with its sweeping views to the north and south, but there was plenty more to see so we headed down the steep hill and paused briefly at Captain Cook’s Lookout.

Four-wheel-driving was next on the list so we headed down Lighthouse Road, turned right onto Arakoon Road, and took another right onto Gap Beach Road. This road is closed in wet weather but that was of no concern to us on a beautiful sunny day. The dirt track was in good condition and we met only one car. Some of the sections are steep but otherwise the road poses no challenge whatsoever.

After parking the car at the bottom of Gap Beach Road, we wandered down to the deserted beach. The azure blue waters glistened in the hot sun while the white sand squeaked under our bare feet. It is a piece of paradise, only kilometres away from the busy town of South West Rocks. The kids ran around excitedly, splashing in the small waves and looking for shells. This is a perfect spot to spend the afternoon, relaxing and enjoying the beautiful scenery.

As we drove back to the campground, the sun disappeared and dark thunderclouds started rolling in. Our rainforest home was a dark place without the sun’s rays shining through the dense canopy. The humidity continued to rise until, at last, the sky lit up followed by deafening thunder. Rain started – softly at first – but soon it bucketed down, flooding the area around our tent. Then, as suddenly as the storm erupted, calmness returned along with the silence, to be interrupted only by the constant dripping from the tree branches.

The next morning, Chris headed out to photograph a sunset – he was not disappointed. The beach is a magical place first thing in the morning when the sea is flat and there’s no one else around. He then drove the short distance to the lighthouse to photograph the impressive tower in the soft light.

We saved the best for last: a visit to Trial Bay Gaol. The historic prison is located in Arakoon NP, adjacent to Hat Head NP. Named after the shipwreck Trial, the bay required the construction of a breakwater to ensure protection during storms as Trial Bay was situated midway along the busy shipping route between Sydney and Brisbane. The prison was built between 1877 and 1886 to house prisoners to construct the breakwater.

The start of World War I brought a new use for the site: more than 500 men of German descent from Australia and German colonies in Asia were interned in the prison. The internees were an elite group of academics, professionals and craftsmen who had been classified as ‘enemy aliens’.

In May 1918, the men were moved to Holsworthy and, four years later, the gaol was decommissioned, its buildings stripped and its contents auctioned.

Today, the impressive buildings stand as a testament to the people who lived and died there, some in exceptional circumstances.

The views from the watchtower are spectacular, though I doubt the prisoners and internees would have enjoyed the scenery. As a matter of fact, five people died during their internment and a monument was erected in 1918. In 1919, the monument was blown up, most likely due to anti-German sentiment. It was some 40 years later in 1959, after a visit by the consul-general of Germany, when a decision was made to restore the monument.

The walk up to Monument Hill is short but steep and well worth the effort. The bird’s-eye view of the old gaol is nothing short of impressive. The granite obelisk surrounded by a Christian cross base demands respect for the plight of these men.

The next day we reluctantly packed up and headed out of Smoky Cape campground.

Hat Head NP is a magic destination – albeit small – leaving you not only with impressions of stunning scenery but an appreciation of good old Aussie history.

The full feature appeared in Caravan World #521 June 2016. Subscribe today for the latest caravan reviews and news every month!