Over the many years we had travelled along the Newell Highway in northern New South Wales on our way to or from adventures in Queensland, we have contemplated the range of lofty peaks rising abruptly on the skyline to the east of Narrabri. On one such trip we decided to make the detour and investigate this dramatic landscape. It turned out to be the Mount Kaputar National Park and we were totally amazed by this ancient masterpiece of nature.

Following the brown national park signs through the back streets of Narrabri, we picked up Old Gunnedah Road, then Kaputar Road as it headed north-east beside Bullawa Creek through pleasant grazing country.

Because of their size and imposing bulk, the mountains seemed a lot closer than they were and we were surprised that it took almost half an hour to cover around 30km to the park entrance in the foothills. 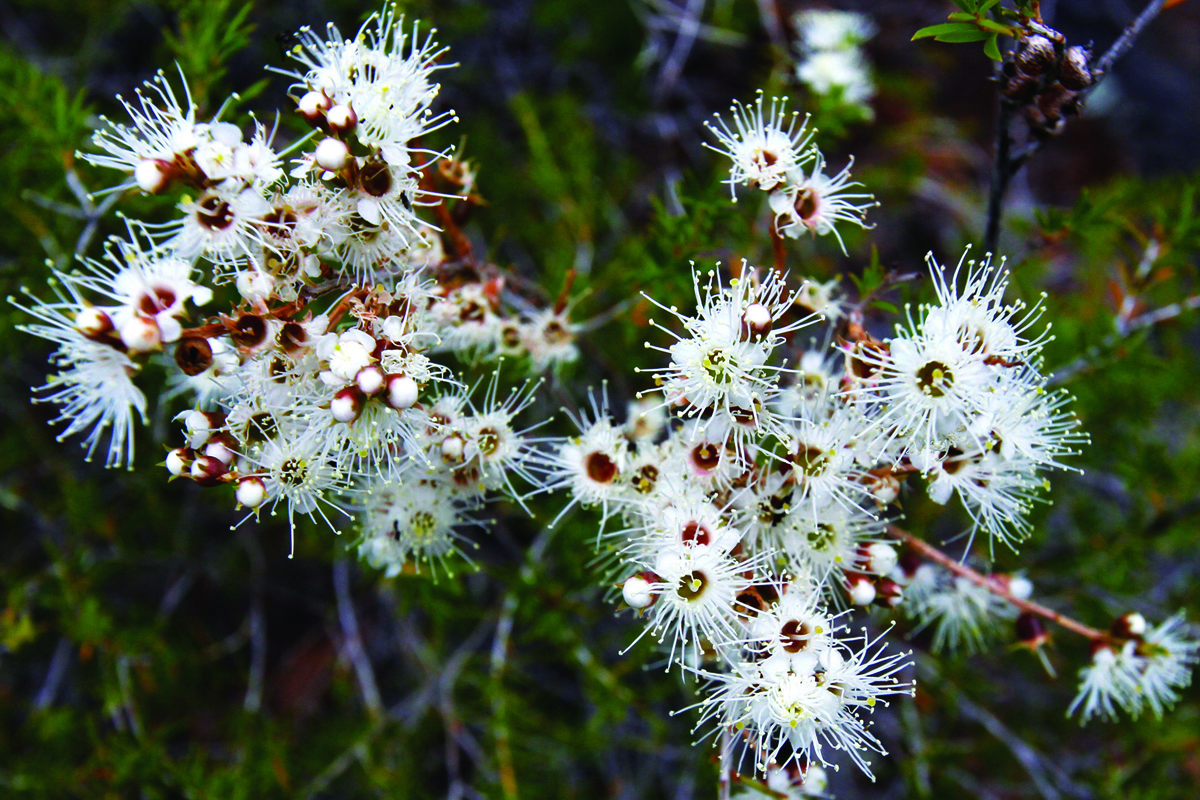 At this point, visitors are confronted by a large sign advising ‘No caravans beyond this point’, for the reason that the access road up to the campground on the plateau is narrow, steep and winding, with some gravel sections, for another 27km. Although our trusty 80 Series had no difficulty towing our hybrid offroad Kimberley Karavan we took it slow and steady just the same.

As the road snaked its way up the mountainside, the scenery around us began to change markedly. The semi-arid woodlands of ironbark and cypress pine covering the lower slopes gave way to towering mountain gums and, eventually, snow gums and ribbon gums interspersed with sub-alpine heath. The terrain began to reveal its volcanic origins with plugs, dykes and columns visible in the cuttings by the roadside and protruding through the forested slopes in the middle distance. This landscape is what remains of an eroded shield volcano that became extinct about 17 million years ago, although some of the exposed rocks in the area are estimated to be as much as 230 million years old.

We began to appreciate also the grandeur of the peaks that are such prominent landmarks in this otherwise flat and featureless plains country — Mount Lindesay (1373m), Mount Dowe (1457m), and the park’s namesake, Mount Kaputar (1508m).

These mountains lie at the western edge of the Nandewar Range, which stretches almost 150km east to Armidale and forms the watershed divide between the Gwydir and Namoi Rivers to the north and south respectively. The sub-alpine plateau of which they form part experiences average temperatures 10 degrees cooler than the plains below. In summer the park is a refreshing oasis in the sweltering heat of the North West Slopes and, in winter, it is not uncommon to see snow on the peaks. Television and radio transmitters on Mount Dowe provide coverage to a vast area, reaching out to the towns of Moree, Tamworth, Gunnedah and Narrabri.

Along the scenic drive up the mountain, pull-outs have been provided at a couple of places affording access to picnic spots, walking tracks and lookouts. Notable among these are Bark Hut (which is also a campground), Euglah Rock Lookout, Doug Sky Lookout (named for the man who oversaw the construction of this road) and The Governor.

From these lofty heights, visitors to the park are treated to spectacular views of the surrounding countryside. The 360-degree view from the summit of Mount Kaputar encompasses an area of about 80,000sqkm or one tenth of New South Wales! These are the traditional lands of the Kamilaroi (or Gamilaraay) people, the second largest Aboriginal nation on the eastern side of Australia. One of the great kings of this warrior tribe, ‘Red Chief’, is buried near Gunnedah. The mountains comprising the national park were a rich source of food, medicines, shelter and weapons, and the landscape features in their Dreaming stories. Evidence of Kamilaroi occupation remains in the form of rock carvings, scarred trees and shelters containing stone flakes and artefacts. Kaputar and Nandewar are the Gamilaraay language names for these features.

John Oxley was the first European to see the Nandewar Range in 1818 as he explored New England’s fertile Liverpool Plains to the south. Thomas Mitchell named Mount Lindesay after the Scottish Colonel (later Major General) commanding the military forces of New South Wales and who was the Acting Governor in 1831. Europeans began to settle in the district in the 1830s and pastoralists used the foothills and mountains of the Nandewar Range for grazing sheep and cattle.

Conditions were harsh and stockmen led a lonely existence, often not seeing another soul for months at a time.

Several pioneering families lived in the Mount Kaputar area and remnants of their occupation remain. Scutt’s Hut, for example, stands on the scenic banks of Horsearm Creek, upstream from Kurrawonga Falls. It took grazier Archie Scutt two years to build the hut in the late 1930s, using materials, including a rainwater tank, brought up the mountainside by packhorse. The Scutt family occupied the hut during the 1940s and ‘50s and it has since been carefully restored to its original condition. It can be reached by a challenging walk along a fire trail from the Bark Hut camping ground, with camping also available in the grassy clearing at the site. ENJOYING THE PARK

The scenic drive up the mountain brought us eventually to Dawsons Spring campground, set among the snow gum forest near the summit of Mount Kaputar. When we arrived, only three of the 25 sites were occupied so we were able to take our time before selecting a cosy spot only a short walk from the well-appointed day use shelter (with barbecues and drinking water) and amenities block (with flushing toilets and hot showers).

This camp is popular with bushwalkers because several excellent walking trails lead from it to various peaks and parts of the surrounding plateau. Over the next two days we enjoyed stepping out along a few of them and were totally blown away (literally and metaphorically) at the cliffside vantage points with panoramic views across the surrounding wilderness. (Three quarters of the park’s 51,000 hectares is declared wilderness, for better management and the protection of endangered plants and animals).

An easy one to warm up with was the Dawson Spring Nature Trail, a 1.4km loop through the sub-alpine woodlands and the headwaters of Horsearm Creek below the camp. This track connected with another for a 1.2km extension to the summit of Mount Kaputar and stunning 360-degree views to the Grattai Wilderness and Moree in the north, the Liverpool Ranges in the east, seemingly endless plains to the west and the Warrumbungles in the south.

Above, wedge-tailed eagles may often be seen soaring and circling in the updraughts rising from the cliffs.

Next day, we headed for the Bundabulla Circuit, a 3.5km loop of medium difficulty, which actually connects a couple of walking tracks to lookouts and mountains around the Kaputar Plateau. From our camp at Dawsons Spring, the track led us south through gum forest and herb fields sprinkled with wildflowers, past Mount Dowe and its transmitter towers to Horsearm Lookout. Here, the lichen-encrusted lava terrace ended abruptly at a precipice overlooking a forested valley, in which the creek flowed unseen to the south.

The circuit continued along a leaf-littered track through more woodland dotted with bright orange pea bush and mauve wildflowers, emerging once again on a lava terrace at the southern perimeter of the plateau. Wading through chest-high stands of white- and pink-flowering tea tree scrub, we stepped out onto Eckford Lookout and, a short distance further on, Bundabulla Lookout, both with views across the plains to the south. The vista here included an ominous spectacle in the form of masses of dark and forbidding clouds bearing down in serried ranks on a stiff wind from the south-east. Curtains of rain could be seen descending in patches here and there across the plain, bringing to mind the warning in the park brochure about how extreme and changeable the weather can be at these high elevations. Much as we would have liked to linger to admire the scenery, we deemed discretion the better part of valour and hastened on to our next waypoint, Mount Lindesay.

The trail now crossed a feature called the Lindesay Rock Tops, an expanse of rocky lava flow, with crevices and potholes that nudged the trail this way and that between the tea tree, until at last it opened onto a platform with a grand view across the Nandewar Range to the east. A desultory shower now pattered down on us so we pulled on the parkas and headed back to camp, well satisfied with this half-day excursion.

SO MUCH TO DO!

There’s a lot more to this beautiful national park than we had time for on this trip — a heart-pumping climb to the summit of Mount Yulludunida for a breathtaking birds-eye view of the park’s ‘crater’, a challenging scramble over stepped lava terraces to Mount Coryah shrouded in grass trees, the spectacular Barraba Track for mountain-bikers through the park’s remote eastern foothills, to name just a few. And in a northern outlier of the park, accessed by the Narrabri-Bingara Road is Sawn Rocks, a startling relic of the region’s volcanic past in the form of a 40m high basalt ‘organ-pipe’ formation. Intrepid hikers can also trek through the spectacularly colourful Waa Gorge in the Grattai Wilderness Area nearby.

So, the next time you’re travelling along the Newell Highway near Narrabri, cast your gaze to the east and you’ll see the lofty peaks of Mount Kaputar National Park beckoning you for adventure in Big Sky Country.