Victoria’s south-west is a place of great natural beauty, with diverse landscapes ranging from sweeping beaches, towering cliffs and rugged coastlines to slowly flowing rivers and interesting towns and villages.

From the historic city of Portland, tucked away in the state’s south-west corner, to Casterton, 42km east of the South Australian border, a meander around this region also reveals fascinating pockets of history, including the Budj Bim Cultural Landscape, a UNESCO World Heritage site north of Portland, and Warrock Station, birthplace of the kelpie, near Casterton. 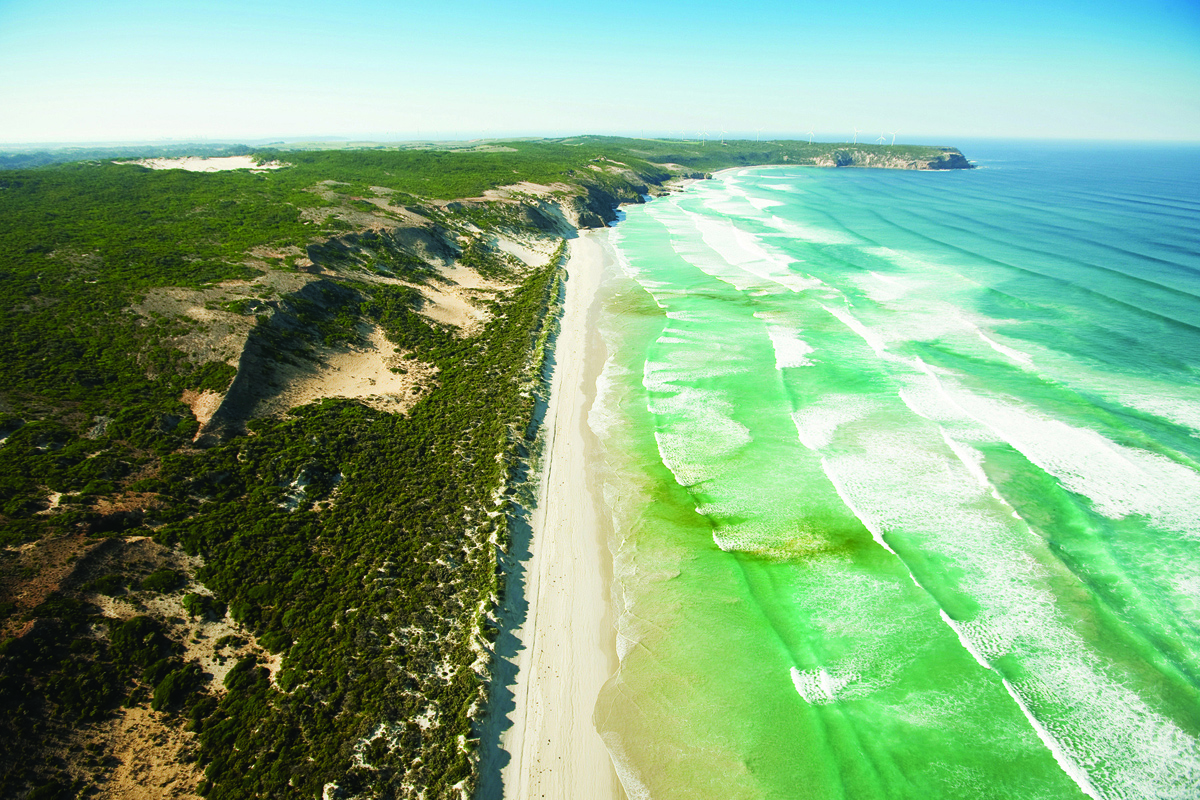 From Melbourne we travel to Geelong, turning onto the Hamilton Highway en route to Portland, Victoria’s first European settlement.

While Portland is known for its industries — the Port of Portland specialises in agricultural, forestry and mining products — the town is also a seaside beauty, reminiscent of some of Victoria’s other historic coastal townships, such as Williamstown, Queenscliff and Port Fairy.

Portland was first established in the 1830s as a whaling station. In November 1834, Edward Henty arrived from Tasmania with livestock and supplies to establish a settlement. Today Portland boasts 200 National Trust-listed buildings.

This interesting city includes Mac’s Hotel Bentinck built in 1856; the former Steam Packet Inn, which dates from 1842; the 1845 bluestone courthouse, high on a hill above the bay that is still in use; and the equally imposing Customs House (1849), also still in use.

Another of Portland’s treasures, the Botanic Gardens, was established in the early 1850s and today feature more than 300 varieties of roses, and a croquet lawn that dates from 1868.

There is an array of eateries to choose from, including a diverse menu at Mac’s Hotel Bentinck that includes local seafood, as well as Indian, Chinese, Italian, and traditional fish and chips at local institutions such as Deegan’s in Percy Street.

From Portland it’s 22km west past rolling farmlands to Bridgewater Bay Beach, a glorious 4km-long arc of golden sands that is practically deserted for most of the year save for lucky locals. Aside from a smattering of houses and the ocean-facing Sea View Lodge, there’s the Bridgewater Bay Cafe, where the coffee is good and the hamburgers ($15) keep you going all day.

NEXT UP, CAPE BRIDGEWATER

At Cape Bridgewater, on the western side of the bay, is Stony Hill. Towering 130m above sea level, it’s the highest clifftop on Victoria’s coastline. The surreal landscape here is the rim of an ancient volcano crater.

Cape Bridgewater is part of the 8,500ha Discovery Bay Coastal Park, a spectacular combination of sweeping beaches, huge sand dunes, placid lakes, and bay after bay of jutting promontories that extends 65km west to Nelson, a mere 4km from the South Australian border.

Heading back towards Portland, Bridgewater Lakes is popular for fishing and canoeing, and ideal for a picnic if it’s windy at the beach. Opposite the entrance to the lakes are the Tarragal caves, a network of limestone caves reached by a steep climb.

Nearby Cape Nelson Lighthouse (not to be confused with the town of Nelson) has towered 50m above the raging ocean at the far edge of Victoria’s shipwreck coast since 1884 and is still in operation today.

Lighthouse tours are held daily, and from the cliffs you may spot southern right and humpback whales in winter, and blue whales in summer.

Heywood, 30km north of Portland, is the starting point for an adventure into one of Australia’s most important historic and cultural sites. Budj Bim Cultural Landscape was added to the illustrious UNESCO World Heritage List in July 2019, joining the likes

of Kakadu National Park and the Great Barrier Reef.

Budj Bim is home to one of the world’s oldest aquaculture systems, and the foundations of around 200 stone dwellings are evidence of a large, settled community dating back around 6,600 years — more than 1,000 years before Stonehenge and the Pyramids of Egypt were raised.

Budj Bim is part of the Eccles Volcanic landform, geologically known as the Tyendarra Flow, which was formed as a result of the explosion of Mt Eccles some 27,000–30,000 years ago.

At the now-dormant volcano, local Gunditjmara people used volcanic rock created by the lava flow to construct an ingenious network of fish traps, weirs and ponds to manage water flows from nearby Lake Condah.

“These structures forced eels and other aquatic life into traps as water levels rose and fell,” explained Aaron Morgan, a Gunditj Mirring World Heritage Ranger, as we strolled towards the ancient channels past some of the 40km of rock walls built here by early European settlers.

Aquaculture channels have been carbon dated from between 6,600 and 300 years old, meaning people have lived here continually, said Aaron.

“The canals also appear to have been used to create holding ponds to keep eels fresh until they were needed for food, providing a year-round food supply, and dispelling the myth that Aboriginal people were primarily nomadic.”

The Gunditjmara people crafted long eel baskets, made of river reeds and spear grass to regulate and trap the eels according to weight and size. Aaron also pointed to a blackened ‘smoking tree’, traditionally used to smoke eels.

Henty, Victoria’s first inland European town, is a dot on the map as we drive north on the 75km journey from Heywood to Casterton on the Portland-Casterton Road, past undulating countryside where cattle and sheep graze.

The first European settlement in the area was the nearby Merino Downs pastoral run, a property of some 23,500 acres taken up by Francis Henty — of Henty brothers, Portland, fame — in 1837.

These days it’s a pleasant country drive through the heart of Glenelg Shire, passing through once-bustling towns including Merino and Sandford, which today feature historic buildings.

Casterton, population of around 1700, is a still-thriving country town, situated amid rolling hills on the banks of the Glenelg River.

First surveyed in 1840, this classic country town lies at the heart of Australia Felix — Latin for “fortunate Australia” — the name given by Thomas Mitchell to lush pastures in parts of Western Victoria he explored in 1836.

A stroll along the town’s main thoroughfare, a parade of historic buildings, reveals two pubs, three cafes, a bakery, a traditional butcher shop, well-stocked supermarket, some antique and second-hand shops, and a book shop.

Casterton is situated centrally to the wineries of the Coonawarra, Mt Gambier, the Grampians National Park and Portland, and is a good base to explore this picturesque region.

The town is also home to the Australian Kelpie Centre, thought to be the only museum in the world dedicated to a breed of dog, and the annual Casterton Kelpie Muster and Kelpie Festival, usually held on the Queen’s Birthday Weekend though this year delayed until 24–25 October due to COVID-19.

Casterton staked its claim as the birthplace of the kelpie in 1994. The Kelpie Muster began as a one-day auction off the back of a ute in 1997, and in 2001 it was expanded into a two-day festival. By 2019 around 10,000 people descended upon the town to celebrate Australia’s working dog.

But the true birthplace of this iconic Aussie breed is Warrock Station, situated in the quiet, rolling hills of the Glenelg River Valley about 20-minutes’ drive north of Casterton. It was here that the breed, which evolved from Scottish Collie dogs, was named after a black and tan dog called Kelpie, the Scots word for water sprite, that lived at Warrock in the 1870s.

We gasped as we turned into the driveway of this extraordinary property, made up of 36 buildings built between 1843 and 1860, which seems frozen in time.

Here we met owner Scott Farquharson, who with his family purchased the heritage-listed property with its unique colonial farm ‘village’ four years ago.

Scott explained Warrock’s fascinating history as we strolled from a sprawling homestead to huge woolsheds.

“George Robertson, a cabinetmaker from Glasgow, settled Warrock as a sheep station in 1843 and quickly began construction of the complex,” said Scott.

Scott and his family have begun the herculean task of restoring this unique property to its former glory, painstakingly repairing George Robertson’s maze of buildings, one at a time.

Warrock, like Budj Bim and so much of Victoria’s south-west region, makes for a fascinating journey into some of Australia’s wealth of Indigenous and colonial history.

The Great South-West Walk is a bushwalking trail suitable for most ages and abilities comprising short two-hour loop walks, full-day walks or, for the hardy, the entire 250km loop. greatsouthwestwalk.com.

Situated on Portland’s foreshore, the Portland Maritime Discovery and Visitors’ Centre has displays about local maritime history, whaling, shipwrecks, marine life, and the story of European immigration and settlement. You can also sign up to Whalemail to receive emails when whales are spotted. portland.com.au.

Tours are by appointment, with a minimum of 15 people ($20 per person).

Budj Bim National Park — 22 unpowered campsites of varying sizes, some suitable for small caravans and camper-trailers. From $25.90 per night, parks.vic.gov.au.

Ess Lagoon — free camping for up to one month for fully self-sufficient vehicles, including shower and toilet.

TRAVELLING WITHOUT THE ‘VAN