Colin Kerr — 2 April 2020
With history that dates back to the Devonian period, Windjana Gorge is a picturesque part of the Napier Ranges

The infamous Gibb River Road, running through the heart of the Kimberleys, is home to many spectacular gorges, and the 3.5km long Windjana Gorge, also known as Devil’s Pass, is one of the most appealing.

Formed from an ancient limestone reef from the Devonian period, which dates back some 380 million years, the gorge is approximately 145km east of Derby. With tall, steep limestone cliffs, a resident population of bats in trees lining the floor of the gorge and a family of freshwater crocodiles, this is one of the best examples of an exposed fossil reef to be found anywhere in the world.

Although the area here today is well inland from the ocean, when worldwide ocean levels were much higher, this region was part of a warm tropical sea and many fossilised corals, shells, extinct fish species and other marine life can be found in the Windjana Cliffs — all splendid examples of ancient life. The area, in fact, has been the subject of extensive scientific study that has found some of the marine creatures here were part of the evolutionary transition between fish and the first land animals. 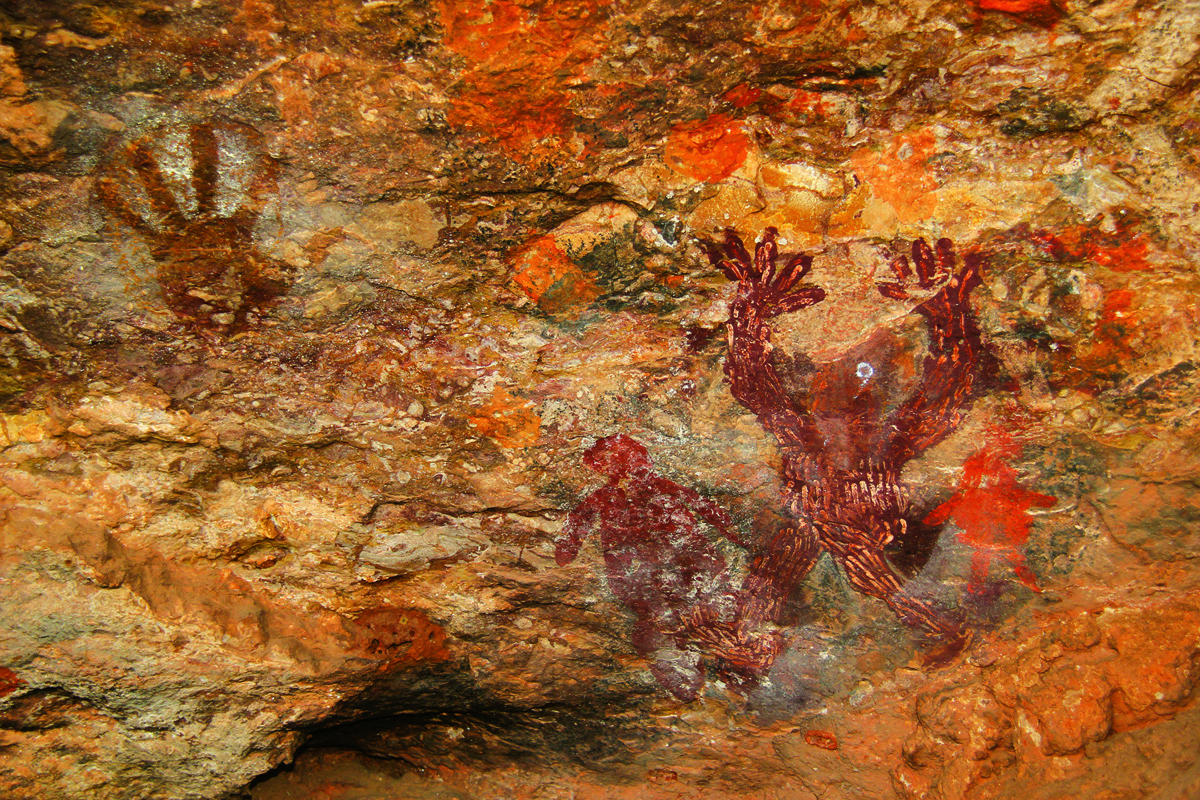 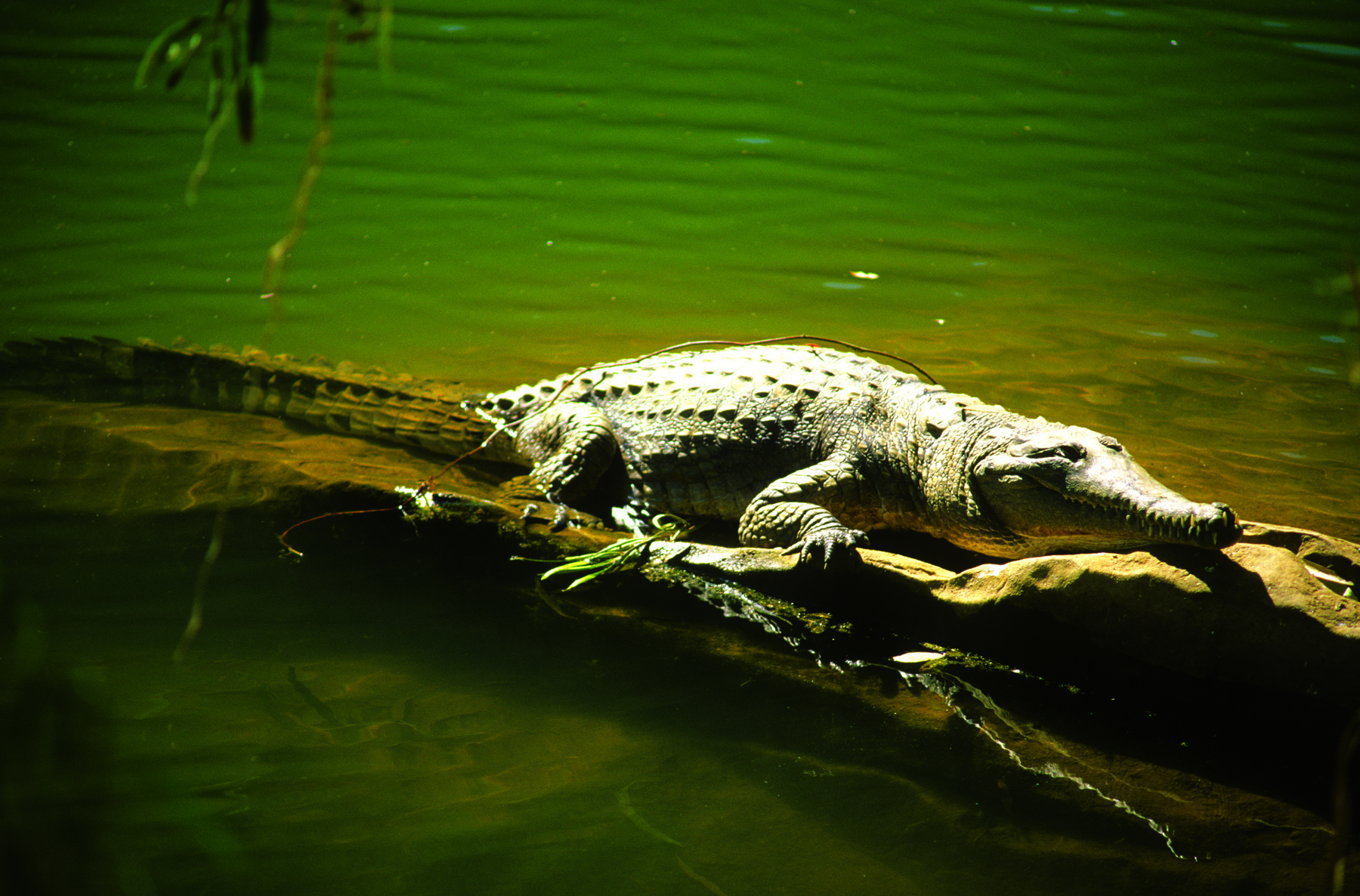 Despite the passage of some 380 million years, this ancient reef is so well preserved that taking a walk in Windjana Gorge is like stepping back into those early Devonian times. With a little imagination it’s not hard to envisage the seas 100 metres above the valley floor, swirling above the top of the jagged limestone range, and all the while swimming around were strange forms of long-extinct fish and other marine creatures.

The local Bunuba Aboriginal people, who have lived in this area for thousands of years, consider the gorge to be a highly spiritual place with the Wandjina, powerful creation spirits, residing there — hence the name Windjana, the spelling of which was misrecorded by William Forrester who took up a pastoral lease near here in 1884. There is also ancient Aboriginal art to be found in the area, including Wandjina figures with their intriguing nose and eyes, but never a mouth.

Back in the days of early settlement, the gorge was used by the famed Bunuba Aboriginal outlaw Jandamarra (commonly referred to as Pigeon) as a place to ambush police, who were chasing him for his years of resistance fighting. The gorge also served as an effective hideout for Jandamarra, who was eventually shot and killed in nearby Tunnel Creek after a number of years avoiding captivity.

Significant to this piece of history, and just 3km from the gorge, are the historic ruins of the old Lilimilura Police Station, a police outpost set up in the 1890s to try to control sheep and cattle stealing plus general law and order to this remote region. The station, however, saw its most hectic activity during the pursuit of Jandamarra and his crew. Jandamarra, in fact, was originally an Aboriginal tracker (one of the best in the Kimberley) working with the local police constable in the area.

During one of their patrols in 1894 they captured some 16 Bunuba Aboriginals whom they had been pursuing. One of the tribal elders persuaded Jandamarra to shoot and kill Constable Richardson, steal his guns, set the prisoners free and lead them in the fight against the police and white settlers who wanted to take over their land. During the next three years Jandamarra waged war on the settlers in the area, killing stock and generally leading the police on a merry and sometimes bloody chase through the countryside.

Sometimes he would even sneak into their camp after dark, steal their rifles, ammunition and supplies and disappear into the night. On one occasion (and there were many more such stories) a police patrol managed to follow him to his hideout at Tunnel Creek, only to later find out he had doubled back and raided the Lilimilura Police Station while they were out looking for him — the police were not at all amused.

Jandamarra was cornered and shot in April 1897, ending three long years of torment and frustration for the Kimberley police. When you visit Windjana Gorge, pause for a few minutes and try to imagine the place as it was, with gun and spear fights, hideouts in caves, ambushes and much more all going on right where you are walking!

PEACE IN THE VALLEY

These days, this picturesque gorge, incorporated in the 2134 hectare Windjana Gorge National Park, is a much more hospitable place, and for the most part its serenity is only disturbed by the surfacing of an occasional freshwater crocodile and the murmur of the Wandjina Spirits who still watch over the gorge — and, of course, through the dry season a regular stream of human visitors.

The easy walk here from the car park and camping area leads along the base of the gorge, passing several permanent pools in the Lennard River where it's possible to see the intriguing archerfish swimming and some of the 70 or more freshwater crocodiles who call Windjana Gorge home sunning themselves on the river banks.

This trail leads some 3.5km through a gap in the ancient Napier Ranges. This is obviously a dry season trail only as the Lennard River flows strongly here during the wet and access to the area, and much of the Kimberleys, is restricted until things dry out.

Along the track, apart from some marine fossils and resident fruit bats, look out for the strangely shaped boab trees which can be found throughout this region, the unusual nests of the green tree ants in the River Fig trees and the colourful red flamed Bauhinia tree. Don’t forget to take a camera to capture the late afternoon colours on the cliff faces along the way.

At the end of the gorge, the track opens out into a vast savannah woodland, a real contrast compared to the cool, shaded environment of the gorge. When returning along the same trail, keep an eye out for things you missed along the way. It’s amazing when you approach from another direction and everything looks quite different — Windjana is no exception!

Back at the Windjana Gorge Campground the area is divided into generator and non-generator areas. But depending on the visitor numbers in each area, it can sometimes be a little quieter in the generator area! Run by the resident National Park Ranger, the grounds are kept in good condition with toilets, warm (solar) showers, drinking water and fireplaces.

Campsites suitable for caravans and tent sites (no power) are spread over quite a large area — open and partly shaded — and are only around 200 metres from the gorge. Don’t forget to look up at night — the sky is so clear out and the stars so bright, it’s like you can reach out and touch them!

Another regular attraction in the camping area is a visit by a large goanna who lives nearby and is often seen checking for any titbits left by the campers in the park — all just another intriguing part of what a visit to Windjana has to offer.

Windjana Gorge is approximately 145km east of Derby and 150km north-west of Fitzroy Crossing. Sealed for part of the way from each centre with some loose gravel and often a few corrugations, 4WD vehicles are recommended, though not essential in dry conditions and lowering tyre pressures can reduce the likelihood of tyre damage if the grader hasn’t been through for a while. The gorge is just 20km off the Gibb River Road.