The name 'Margaret River' is a catchall: it's a river, a town and a broad peninsula at the corner of the continent, 280km south-west of Perth. To the west, the Indian Ocean provides a dramatic boundary of limestone cliffs and rocky headlands, interspersed with sheltered bays as well as some of Australia’s most beautiful beaches.

The regional peninsula is surrounded by water on three sides — the warm tranquil waters of Geographe Bay to the north and the powerful Indian and Southern Oceans to the east and south.

The seas’ tempering influence ensures a ‘Mediterranean’ climate of warm, dry summers tempered by afternoon sea breezes and cool, wet winters that deliver most of the annual rainfall of about 1130mm. 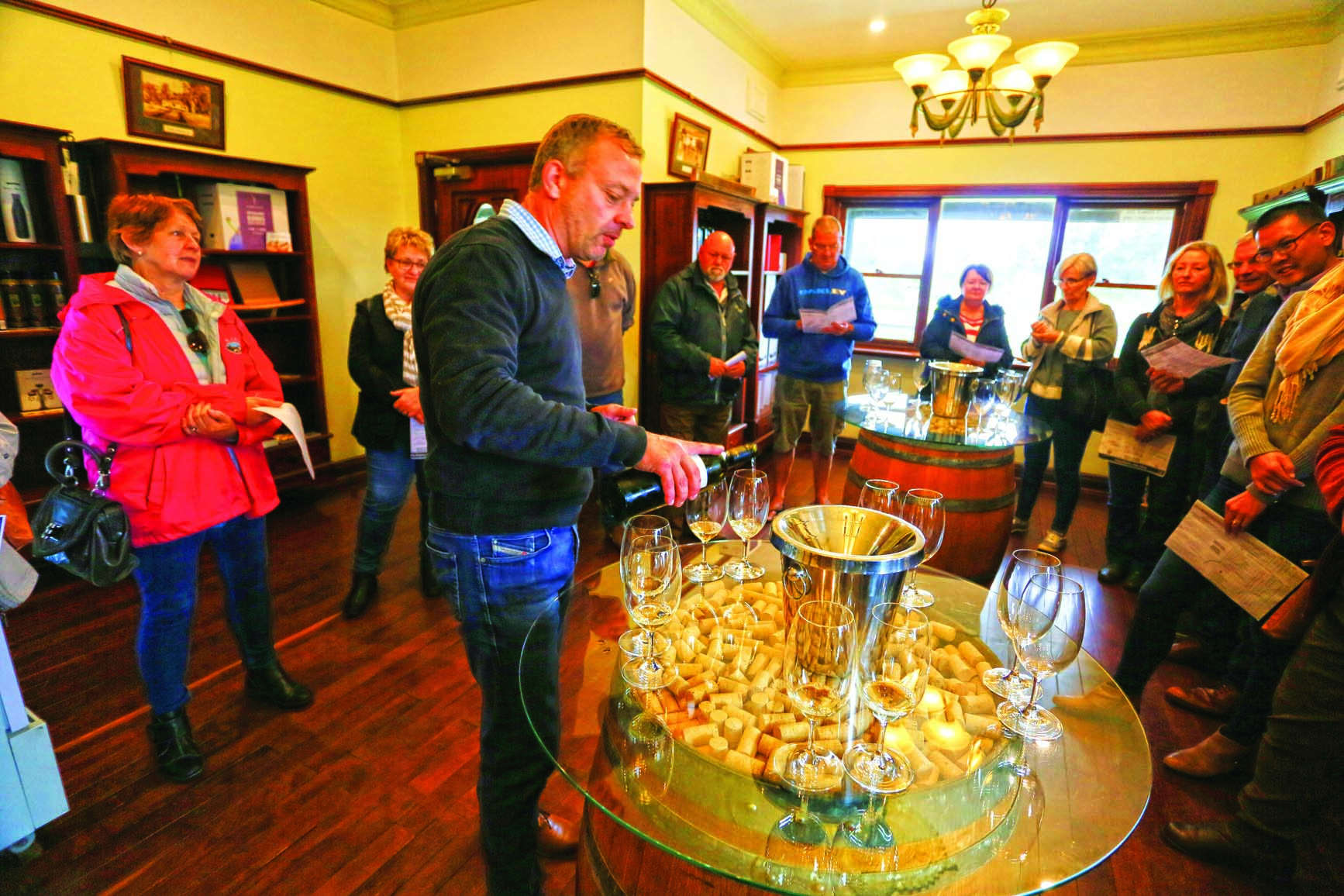 It’s a year-round destination but the best times to visit are autumn, winter and spring, ideally scheduled for mid-week to avoid the rush of ‘weekend warriors’ from Perth.

Margaret River is one of the most popular holiday destinations in Australia, attracting an estimated 500,000 visitors annually for its internationally acclaimed wines and a smorgasbord of locally-grown gourmet food including olives, venison, award-winning cheeses, chocolate, organic fruit and vegetables and fresh seafood harvested from the bountiful oceans.

With numerous celebrated restaurants and chefs there is something to tempt every palate from a casual lunch to a sumptuous dinner, perfectly matched to the local wines.

For the culture vultures, an abundance of arts and crafts adorn the local galleries, boutiques and shops, and cultural events fill a year-long calendar.

Shadowing the magnificent coastline is Caves Road, one of Australia’s great tourist drives and an icon of regional identity. It branches off the Bussell Highway, just north of Augusta, and runs north along the Leeuwin-Naturaliste Ridge to Dunsborough on Geographe Bay. As it meanders through towering karri trees and native bush, side roads divert to scores of surfing hotspots and some of the region’s best wineries. It is named for the many spectacular limestone caves it links — Jewel, Mammoth, Lake Ngilgi and Giants — all noted for their stunning formations and captivating beauty.

Near Karridale, Caves Road enters the Boranup Karri Forest (part of the larger Leeuwin-Naturaliste National Park). There are no signs but you will know instantly that you have arrived at the 3200ha reserve of towering, 100-year old pale-barked karri (the third tallest tree in the world) that harbours a wealth of endemic flora and fauna. Touring through these magnificent giants is a quintessential Margaret River experience, with many pull-outs to viewing platforms at which to pause and appreciate their soaring beauty. Another worthwhile stop is the Boranup Cafe and Gallery, where local artists exhibit paintings, sculptures and exquisite furniture crafted from local timber.

Beyond the forest, Boodjidup Road branches off toward Margaret River (the town), crossing undulating farmlands interspersed with several vineyards, including that of the region’s oldest and largest winery, Leeuwin Estate, famous for its fine wine, award-winning restaurant and gallery of artwork featured on its labels.

Established in 1831, the town of Margaret River lies in the valley of the eponymous river, which is presumed to be named after Margaret Whicher, cousin of John Garrett Bussell (founder of Busselton). The town’s long, sweeping main street is lined with cafes, gourmet delis, curiosity shops, boutiques and galleries. At night the town centre comes alive with fantastic foodie restaurants, wine bars and pubs with live music. Walking and cycling tracks meander along the river or through the surrounding forest to the vineyards and farms, while the world-famous Margaret River surf is only 10 minutes away on the coast. A range of quality accommodation is available in backpackers, bed and breakfasts, apartments, luxury lodges and hotels.

If it's a Saturday, head for the Margaret River Farmers Market, recently crowned Australia’s best market, with up to 60 stalls offering an incredible range of locally-grown produce and wares — preserves, relishes, jams, organic fruit and vegetables, berries, meat products, cheese, yoghurt, nuts, artisan chocolate, handmade artwork, candles, essential oils, homewares, clothing, crafts and plants. It is a strict rule for stallholders that they can only sell what they have made, grown or produced themselves, no re-selling is allowed. It’s as much a tourist attraction as it is a place to shop, eat and socialise, but it's best to arrive early as the markets attract more than 3000 people on a summer’s morning (locals get there before 10am).

In fact, farmers markets are an important part of life throughout the southwest and you’ll find one in nearly every major town in the region on most weekends. Some have become something of an institution, like the Rotary Markets in Busselton and the Lions Markets in Dunsborough, which have operated for more than 25 years.

Margaret River’s wine history began in the 1830s when the Bussell family planted vines to make their own table wine, but the region’s grape-growing potential wasn’t fully appreciated until it was ‘discovered’ by a couple of research scientists in the 1960s. Since the first significant commercial planting of vines in 1967, the Margaret River region has built an impressive international reputation as a producer of fine wine on par with the world’s best.

Today, there are over 5500 hectares under vine and approximately 215 grape growers and wine producers in the region. Winery operations range from the many small boutique vintners crushing around 3.5t per year up to the largest producing over 10,000t annually.

Although Margaret River contributes only about three per cent of the country’s wine grapes, it commands over 20 per cent of the premium wine market and is represented on the wine lists in many Australian restaurants. Highly regarded as a producer of powerful yet elegant cabernet sauvignon, the region has also forged an enviable reputation for its white wines, notably chardonnay and semillon sauvignon blanc blends.

With more five-star rated wineries than any other region in Australia, Margaret River has an embarrassment of riches to offer visiting wine lovers. A list of the best wineries would fill a roll of honour greater than that of any other region. You can visit cellar doors almost any day of the week and some wineries offer tours of their vineyards, which give you a glimpse into the history and process of winemaking in the region. Many wineries have stellar views and some host restaurants serving sumptuous cuisine; a few even have art galleries.

It has to be acknowledged, however, that wine is not everyone’s ‘cup of tea’. Luckily, for those who prefer a brew, the region is also home to an increasing number of boutique breweries, each offering their own unique styles of beverage, from pilsner and pale ale to lager and wheat beer, all perfectly crafted to suit the season and quench even the hardiest thirsts.

Faced with such a bewildering array of options, the casual tourist on a time-poor itinerary would do well to consider joining a guided tour offered by one of the many companies operating in the region. One of the best, for a comprehensive introduction to the region’s epicurean delights, is the all-inclusive full-day Winery and Brewery Tour with Bushtucker Tours. It’s really well organised, loads of fun and excellent value for money — well-deserving its Trip Advisor Award of Excellence, several years running.

Here's what you can expect on this excellent day out: Churchview Estate for a tutorial in the fine art of wine tasting, featuring some of the best wines in the district; Knotting Hill Wines for another tasting and a buffet lunch showcasing some of the region’s tastiest gourmet comestibles; Margaret River Dairy Co. for cheese and yoghurt; the Margaret River Chocolate Factory, a chocaholic’s paradise; The Grove Distillery for a sampling of liqueurs and combinations thereof in a choice of cocktails; Thompson Estate for another wine tasting; and to round off the day with a palate-cleansing ale, a visit to The Cheeky Monkey Brewery.

No travelogue about Margaret River would be complete without reference to the many fine beaches that adorn the region’s magnificent coastline and support a world-renowned culture of big wave surfing.

The unique orientation of the Leeuwin-Naturaliste coast exposes it to large, uninterrupted swells that sweep in off the Indian Ocean, consistently producing some of the best (and biggest) surf breaks in the world at no fewer than 75 locations. The Cowaramup Bombora ('Cow Bombie') 2km offshore produces one of the biggest waves in Australia — up to 20m in 2014, according to pro-surfer Mick Corbett.

For the rest of us mere mortals who don’t have a board (or the courage) to mix it with the big wave adrenaline junkies, there are many pristine, white sand beaches along the coast that are safe for swimming and suitable for families. Beaches in and around the Margaret River area such as Meelup, Gnarabup, Smiths Beach and Yallingup are all worth a visit, and with a little more effort you can find some lesser known but equally beautiful spots to pitch your igloo for a day of seaside relaxation without the crowds.

The Margaret River Region boasts world-class wines and gastronomic delights in abundance. But ‘Margs’ has a lot more to offer the travelling epicure — dense karri forests, spectacular coastal scenery, adrenaline-fueled surfing, ancient limestone caves, fascinating maritime history, giant marine mammals, outdoor adventure trails and a climate to enjoy it year round. Be sure to set aside plenty of time to enjoy one of the most complete holiday destinations in Australia.